JLF 2022 kicks off in hybrid form with impressive list of speakers, delegates

The Jaipur Literature Festival 2022 is back with a bang in the Pink City this year. Despite a postponement due to COVID, the latest hybrid iteration of arguably the world's biggest litfest kicks off tomorrow with the online segment till March 9. 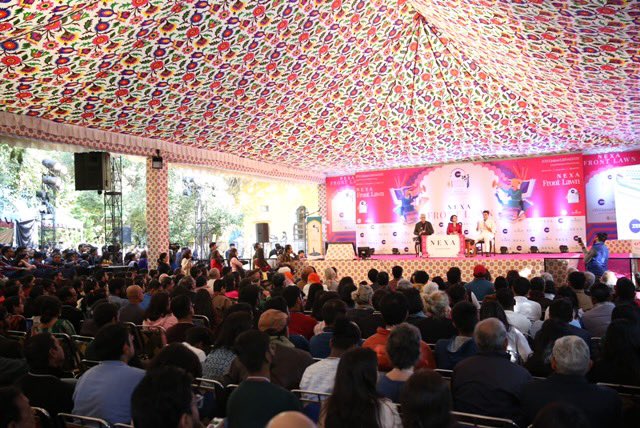 The festival this year will host an array of diverse speakers covering different angles of various issues including climate change, the pandemic and international diplomacy. Photo courtesy: Twitter/@SachinPilot

The onground portion of the event is being hosted at Hotel Clarks Amer from March 10-14. Over 400 speakers and performers representing around 15 Indian and 20 international languages and over 20 nationalities as well as all the major literary awards ranging from the Nobel, the Booker, the Pulitzer, the Sahitya Akademi, the DSC Prize for South Asian Literature, the JCB Prize for Literature will be featured over the course of JLF 2022.

William Dalrymple, author and Festival Co-director, said, "The pandemic has been a hard time for everyone, but literary festivals have faced existential challenges to their survival. Now we are back, and are thrilled to bring our beloved Festival back to the hallowed soil of Jaipur.”

The festival will host some of the world's greatest literary minds and bring them together for several panel discussions and interactions. Various eminent personalities include the 2002 Pulitzer Prize for Fiction finalist Jonathan Franzen; 2021 Booker winner Damon Galgut; Australian author and 2003 Booker winner DBC Pierre.

2021 Literature Nobel recipient Abdulrazak Gurnah will be in conversation with British publishing legend Alexandra Pringle at a session on a life in writing.

JLF sets literary conversations and dialogue against a cultural backdrop promoting India's traditional heritage including curated art installations, cultural evenings and the Jaipur Music Stage, which runs parallel to the Festival, as well as a gathering of authors, publishers, agents and literary representatives for the Jaipur BookMark conference.

The festival this year will host an array of diverse speakers covering different angles of various issues including climate change, the pandemic and international diplomacy.

The rich programme will feature, among others, a session with Bruno Maçães, decorated author, international commentator and advisor to some of the world's leading companies on geopolitics and technology, who will be exploring the study of an emerging world order that is competitive and driven by the need to adapt and survive in increasingly hostile natural environments. In conversation with former diplomat and author Navtej Sarna, Maçães will discuss book Geopolitics for the End Time: From the Pandemic to the Climate Crisis.

Politician, economist, historian and writer Jairam Ramesh’s 'Green Signals: Ecology, Growth, and Democracy in India' presents a fascinating debate between economic growth and ecological security and highlights the importance of the environment in a nation’s visions for the future. Mridula Ramesh is the author of the critically acclaimed book, 'The Climate Solution: India’s Climate Change Crisis and What We Can Do About It'.

The Jaipur Music Stage will be held from March 10-12, 2022. The power-packed line-up of performers will feature a diverse group of artistes from all over the Indian subcontinent who will sweep you off your feet and bring back the magic of live music.

The Jaipur BookMark (JBM), the biggest publishing conclave in South Asia, is held parallel to the Jaipur Literature Festival. As a B2B platform, it brings together publishers, literary agents, translation agencies and writers wanting to talk business along with focussed sessions and major industry players from across the world.

The Festival Buzzar will run at Hotel Clarks Amer on all five days from 9:00 am to 6:00 pm.