The Western Naval Command has unfurled the world's largest national flag - an Indian Tricolour - at the Naval Dockyard in Mumbai, overlooking the historic Gateway of India, in honour of Navy Day 2021.

Navy Day is celebrated every year on December 4 to mark the daredevil attack by the Indian Navy on Karachi Naval Harbour in 1971. 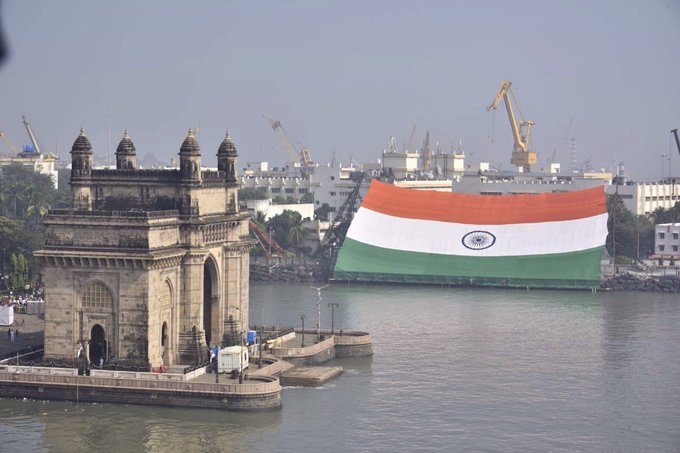 The Indian Tricolour at the Naval Dockyard in Mumbai overlooking the historic Gateway of India, in honour of Navy Day 2021. Photo courtesy: DD News

This year, the nation is celebrating 'Swarnim Vijay Varsh' to commemorate the 50th anniversary of India's victory in the 1971 war.

The Indian Navy is the naval branch of the Indian Armed Forces and is spearheaded by the President of India as Commander-in-Chief.

On this occasion, President Ram Nath Kovind and many senior leaders greeted the naval personnel and the families.

“On Navy Day, greetings to all Navy personnel, veterans and their families. Besides safeguarding maritime security and protecting our interests in the sea, our Navy also played a stellar role in coping with the COVID-19 related crises. Indians remain grateful for your service,” President Kovind said on Twitter.

“On this special day commemorating Indian Navy’s daring ‘Operation Trident’ during #1971War, my greetings and best wishes to all personnel of this outstanding force which continues to protect our National Interest through Maritime Security,” Defence minister Rajnath Singh said in his tweet.

“Greetings to our brave Indian Navy personnel and their families on the special occasion of #NavyDay. The nation is proud of our valorous Naval force for their commitment towards securing India's maritime interests and helping the countrymen during the civil emergencies,” Union Home Minister Amit Shah tweeted.

"On the occasion of Navy Day 2021, we reaffirm Indian Navy's unwavering commitment to preserve, protect and promote India's maritime interest, pay homage to supreme sacrifices of our bravehearts and express gratitude to our veterans,” Admiral R Hari Kumar said on his Twitter post.

“Salute to the bravery of all the navy personnel serving to protect the country's maritime borders. Wishing you all a very Happy Indian Navy Day. We are all proud of your unwavering commitment, valour and courage to serve and protect the nation,” Uttar Pradesh Chief Minister Yogi Adityanath said on Koo.

INS Vikramaditya is an Indian Carrier ship that was commissioned in 2013. It can carry over 30 aircraft comprising an assortment of MiG 29K/Sea Harrier, Kamov 31, Kamov 28, Sea King, ALH-Dhruv and Chetak helicopters.

INS Vikrant, also known as Indigenous Aircraft Carrier 1, completed basin trials in December 2020 and is expected to start sea trials by the end of 2021.It is the first aircraft carrier to be built in India.

INS Arihant (SSBN 80) was launched in 2009 at the Indian Navy’s dockyard in Visakhapatnam. It is the lead ship of India’s Arihant class of nuclear-powered ballistic missile submarines.

INS Chakra, the Nuclear Power Ballistic Missile Submarines, was commissioned on January 23, 2012 at Bolshoi Kamen in Russia. It was the second nuclear-powered attack submarine that India had taken on lease from Russia.

INS Mysore is a Fiji-class cruiser that was commissioned in the Indian Navy in 1957. It is known for its outstanding contributions during the Western Fleet Operations.

The INS Rana was commissioned in 1982. It is one of Rajput class guided-missile destroyers. It is also known as Kashin-II class. These are the first ships in the Indian Navy to deploy the BrahMos supersonic cruise missile systems.

INS Delhi was commissioned in 1997 and is the lead ship of her class of guided-missile destroyers of the Indian Navy which is designed and built-in India. It is one of the largest warships.