Russian forces seized control of Europe's biggest nuclear power station in Ukraine and a blaze caused by fighting at the site was extinguished. Officials said the plant was operating normally. 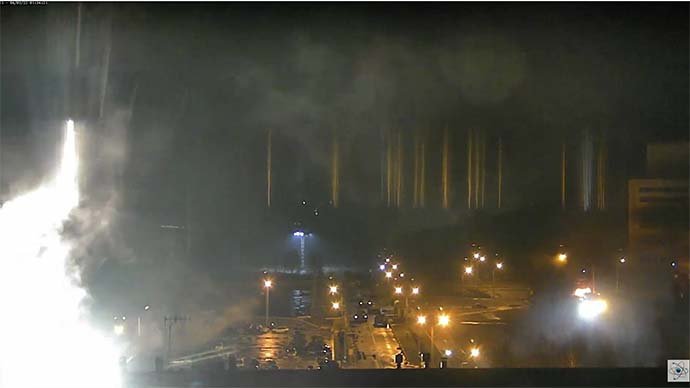 The prospect that fighting at the plant could cause a potential nuclear disaster had set world financial markets tumbling. Photo courtesy: Twitter/@ahmedelsefy17

They added that the fire at the Zaporizhzhia compound was in a training centre and not at the plant itself. An official at Energoatom, the state enterprise that runs Ukraine's four nuclear plants, said there was no further fighting, the fire was out, radiation was normal and Russian forces were in control.

Russia had launched an attack against the nuclear plant site early today morning and Ukrainian leaders had warned that a breach of the reactor core could lead to a disastrous nuclear meltdown.

Ukraine Foreign Affairs Minister Dmytro Kuleba said, "Russian army is firing from all sides upon Zaporizhzhia NPP, the largest nuclear power plant in Europe. Fire has already broken out. If it blows up, it will be 10 times larger than Chernobyl!"

The prospect that fighting at the plant could cause a potential nuclear disaster had set world financial markets tumbling.

Even with that scenario seemingly averted, Russia's grip on a plant that provides more than a fifth of Ukraine's electricity was a big development after eight days of war in which other Russian advances have been stalled by fierce resistance.

US Energy Secretary Jennifer Granholm and other Western officials said there was no indication of elevated radiation levels at the plant.