India has inducted and deployed the first firing unit of ‘S-400 Air Defence System’ and the second unit is also in the process of getting inducted, IAF Chief Air Chief Marshal VR Chaudhari said. 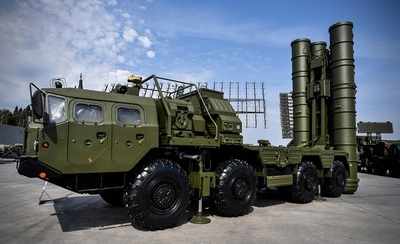 S-400 detects an aerial threat approaching the air defence bubble (the area it has to protect), and calculates the trajectory of the threat, and fires missiles to counter it. Photo courtesy: Twitter/@RussCoP1

“The induction program of S-400 is going as per the schedule. The first firing unit has been inducted and deployed. The second unit is also in the process of getting inducted. Delivery schedules are on time, hopeful that by the end of next year all deliveries will be completed,” said the Air Chief Marshal.

Informing about the threats on multiple fronts, the IAF Chief said, “The capabilities of the Air Force in handling two fronts at a time will necessarily have to keep getting bolstered by the induction of various platforms.”

On the ground, we will need more radars, and additional Surface-to-Air Guided Weapon (SAGW) systems and all of these are going to come from indigenous sources, for which the action is already at hand,” he said while speaking on the IAF preparedness to deal with the threats on the borders.

Notably, India and Russia signed the S-400 Missile deal in October 2018. S-400 is a potent air defence system in terms of its operational capability, which provides a continuous and effective air defence to a wide range of areas.

S-400 is equipped to protect against almost all sorts of aerial attacks, including rockets, drones, missiles, and even fighter aircrafts. Further, the S-400 Air Defence System is intended to act as a shield over a particular area and is a long-range surface-to-air missile system.

Each unit of S-400 consists of two batteries, each of which has a command-and-control system, a surveillance radar, an engagement radar and four lunch trucks.

S-400 detects an aerial threat approaching the air defence bubble (the area it has to protect), calculates the trajectory of the threat, and fires missiles to counter it.

The Indian Air Force is fully in sync with the nation’s Aatmanirbhar Bharat push which has resulted in the “quick induction” of platforms such as the light-combat helicopter and aircraft, and radar systems.

“We are fully in sync with the government’s push for self-reliance and Make-In-India. In the DPSUs, we have had project management teams, which have been synchronising our efforts along with those of the industry. The result of this has been the quick induction of platforms such as the light-combat helicopter and aircraft, and radar systems,” IAF Chief Air Chief Marshal VR Chaudhari informed.

Now we are making an all-out effort to reach out to the private industry and also to the MSMEs. We have a lot of plans to involve the MSMEs in our future growth,” the IAF chief added.

Air Chief Marshal Chaudhari also exuded confidence in the Indian industry and said that “it may take a little longer but they will definitely deliver”.