It was a great day for Indian badminton as the men's team clinched a historic first-ever Thomas Cup title, beating 14-time champions Indonesia 3-0 in the final of the prestigious team championship in Bangkok, Thailand today. 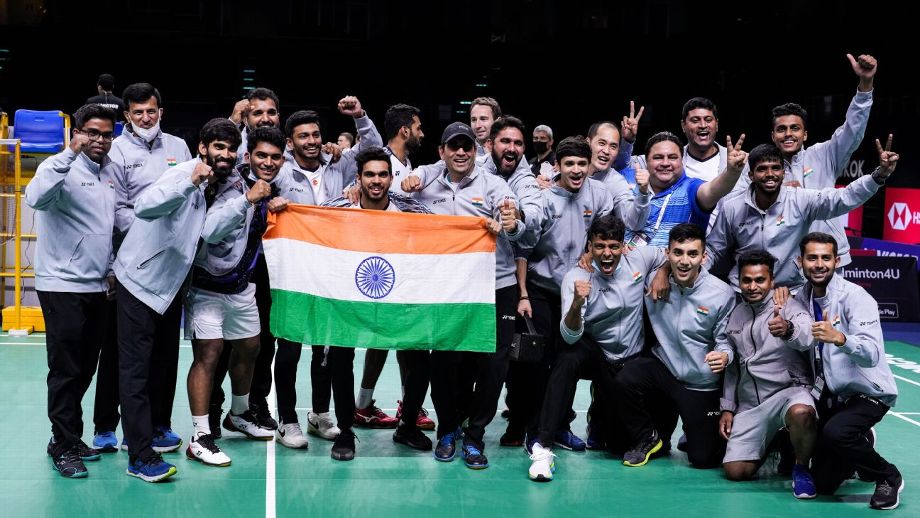 Underdogs India had never reached the final of the Thomas and Uber Cup in the tournament's 73-year-long history, but the Indian men not only broke the drought but went a step ahead and became only the sixth nation after China, Indonesia, Japan, Denmark, and Malaysia to win the Thomas Cup title.

Chants of 'Bharat Mata Ki Jai' and the sound of Dhol were reverberating at the Impact Arena as the young Indian shuttlers came out all guns firing on the big day.

Lakshya Sen, Satwiksairaj Rankireddy/Chirag Shetty and Kidambi Srikanth guided India to a 3-0  victory in the final.

Pure show of grit and determination & India becomes the #ThomasCup champion for the 1️⃣st time in style, beating 14 times champions Indonesia 🇮🇩 3-0 in the finals 😎

In the first doubles match, Satwiksairaj Rankireddy and Chirag Shetty lost the opening game 18-21 against World No 1 and World No 2 doubles stars Kevin Sanjaya and Mohammad Ahsan and saved four match points in the second game to force a decider. They stunned Sanjaya and Ahsan to give India a 2-0 lead.

Kidambi Srikanth ended a dream Thomas Cup 2022 with a perfect 6-0 record. The former World No 1 dispatched Jonatan Christie 21-15, 23-21 in the second singles match to secure the Thomas Cup.

India's chief coach Pullela Gopichand said it was a proud moment not only for Indian badminton but for Indian sport. Congratulations poured in for the team from Indian political leaders, celebrities and sportspersons.

Indian sports minister Anurag Thakur announced a cash award of Rs 1 crore for the winners of the Thomas Cup.