Zelenskyy’s visit a ‘historic one’ in US-Ukraine ties

Ukrainian President Volodymyr Zelenskyy was given a hero’s welcome here as he stepped out of his war-ravaged country for the first time after the Russian invasion 300 days ago. 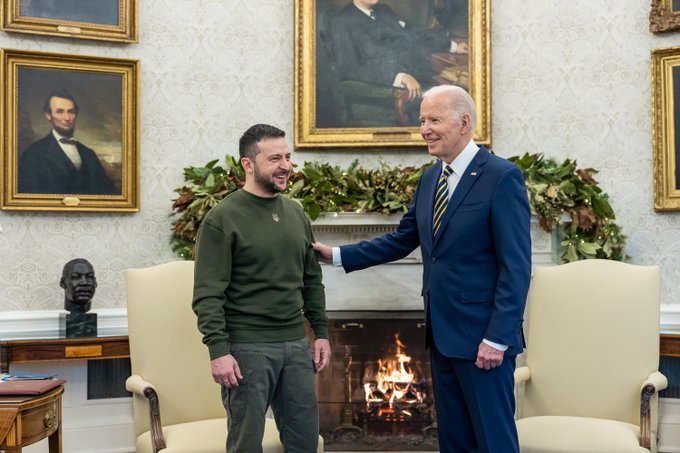 Zelensky, 44, met US President Joe Biden in the Oval Office and jointly addressed a press conference at the White House. He was given the rare distinction of addressing a joint session of the US Congress on a day packed with back-to-back meetings.

“(your) leadership through this terrible crisis has inspired the Ukrainian people, as you have done, President, and the American people and the entire world,” Biden told him at a joint news conference at the White House.

“As we head into the New Year, it's important for the American people and for the world to hear directly from you, President, about Ukraine's fight and the need to continue to stand together through 2023,” Biden said.

Incidentally, Zelenskyy’s visit also marks 300 days after Russia's invasion of Ukraine, which Biden described as an unprovoked, unjustified all-out assault on the free people of Ukraine.

Zelenskyy, who throughout the day had meetings with top American leadership, told reporters that he came to the United States to “thank - the word of thanks to the people of America'', people who do so much for Ukraine.

Zelenskyy gave Biden a Ukrainian military medal: The Cross for Military Merit. This particular medal was awarded earlier this year to a Ukrainian officer for outstanding feats on the battlefield.

The officer met earlier this week with President Zelenskyy in Bakhmut and asked him to give his medal to Biden as a token of his profound gratitude. The officer also wrote Biden a letter expressing Ukraine's appreciation for America's assistance that helped keep many people in Ukraine alive.

Biden gave Zelenskyy two command coins. One is for the Ukrainian hero that wanted the President to have his medal and one is for President Zelenskyy.

“Against all odds and doom and gloom scenarios, Ukraine didn't fall. Ukraine is alive and kicking,” he told a joint meeting of Congress Wednesday night,” Zelenskyy said in his address to the US Congress, wherein he thanked the United States and its people for the billions of dollars in military aid.

“Your money is not charity. It is an investment in global security and democracy that we handle in the most responsible way,” he said.