Ukraine's President Volodymyr Zelenskyy has hailed the capture of the important strategic town of Lyman from Russian control as Ukrainian forces continued their counteroffensive. 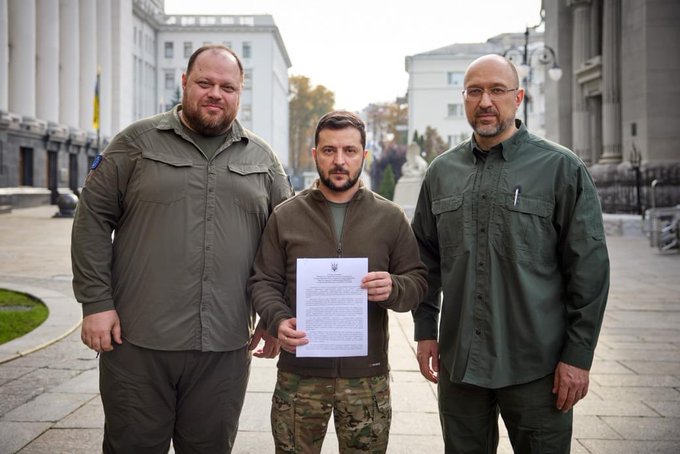 "Ukraine will not hold any negotiations with Russia as long as Putin is the president of the Russian Federation. We will negotiate with the new president," Zelensky said. Photo courtesy: Twitter/@DefenceU

Kyiv's most significant battlefield gain in weeks provides a potential staging post for further attacks to the east while heaping further pressure on the Kremlin.

"As of 1230 (1130 CET), Lyman is fully cleared," Ukrainian President Volodymyr Zelenskyy said in a short video clip on his Telegram channel. "Thank you to our troops ... Glory to Ukraine!"

"Over the past week, there have been more Ukrainian flags in the Donbas. In a week there will be even more," Zelenskyy said in his earlier nightly address.

Ukrainian soldiers announced the capture in a video recorded outside the council building in the town centre and posted on social media.

"Dear Ukrainians: today the armed forces of Ukraine... liberated and took control of the settlement of Lyman, Donetsk region," one of the soldiers says. At the end of the video, a group of soldiers cheer and throw Russian flags down from the building's roof and raise a Ukrainian flag in their place.

Russia’s loss of the eastern town came just a day after Vladimir Putin proclaimed the Donetsk region in which it is situated, along with three other regions, as part of Russia.

The consequences are more than symbolic. Lyman's role as a transport and logistics hub, is a new blow to the Kremlin as it seeks to escalate the war by illegally annexing four regions of Ukraine.

US defence secretary Lloyd Austin described the capture of Lyman as "absolutely... significant".

"We're very encouraged by what we're seeing right now. Lyman sits astride the supply lines of the Russians. And they've used those routes to push men and material down to the south and to the west. And without those routes, it'll be more difficult (for the Russians)," he said on Sunday.

NATO Secretary General Jens Stoltenberg said the capture of the town, where Ukrainian flags were raised over civic buildings on Saturday, demonstrated that Ukraine is capable of dislodging Russian forces and showed the impact Ukraine's deployment of advanced Western weapons was having on the conflict.

"We have already proven our compatibility with (NATO) alliance standards," Zelensky said in a video posted by the Ukrainian presidency on social media. "We are taking a decisive step by signing Ukraine's application for accelerated accession to NATO," he added.

He also said that Kyiv would not negotiate with Russia - which sent troops into Ukraine on February 24 - as long as President Vladimir Putin was in power.

"Ukraine will not hold any negotiations with Russia as long as Putin is the president of the Russian Federation. We will negotiate with the new president," Zelensky said.

His remarks come after Putin signed treaties to annex four Moscow-occupied Ukrainian regions - Donetsk, Kherson, Lugansk and Zaporizhzhia - at a grand ceremony in the Kremlin.