India's Defence Minister Rajnath Singh held a high-level meeting on the security situation with Chief of Defence Staff General Anil Chauhan, the Army Chief and other top officials a day after it was reported that the troops from both sides - India and China - clashed along the Line of Actual Control (LAC) in Arunachal Pradesh's Tawang on December 9. 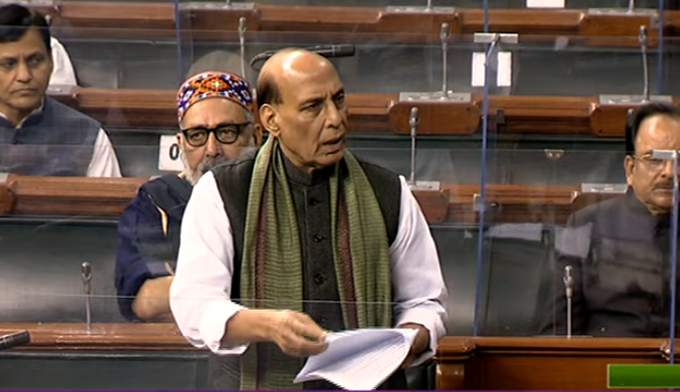 In a statement in both houses, Rajnath Singh said the Indian soldiers prevented the Chinese from making a landgrab in Arunachal Pradesh and "compelled the Chinese troops to return to their posts". Photo courtesy: Twitter/@ANI

Meanwhile, several opposition leaders have submitted notices in Parliament on the face-off, the first since June 2020 Galwan valley violence in the sensitive Ladakh sector.

In a statement in both houses, Rajnath Singh said the Indian soldiers prevented the Chinese from making a landgrab in Arunachal Pradesh and "compelled the Chinese troops to return to their posts".

No soldier was killed or seriously injured in the clash between Indian and Chinese troops on December 9, he said. The government, he said, had spoken to China through diplomatic channels soon after the border clash.

"Our forces are ready to meet any challenge on the border," he stressed.

Rajnath Singh's statement did not silence the opposition parties, who walked out in protest. The Opposition said it was not satisfied with just a statement and wanted a discussion on the crucial border issue.

In a statement, the army yesterday underlined, “People's Liberation Army (PLA) troops contacted the LAC in Tawang sector which was contested by own troops in a firm and resolute manner. This face-off led to minor injuries to few personnel from both sides."

The latest developments come amid ongoing tensions with China over the Galwan valley clashes in June 2020 when both nations had lost troops.

Several rounds of military talks have been held in the last 30 months following the stand-off.

As the details of tensions in Arunachal were revealed, several opposition leaders unleashed attacks on the central government, seeking a discussion in Parliament.

Members of Parliament of the Aam Aadmi Party (AAP), Congress, and the RJD have submitted suspension notices in Parliament over the face-off.

The opposition has accused the government of not revealing all the details on the sensitive matter.

Rajnath Singh's address in Parliament comes days after the last election season for 2022 got over with the BJP winning the crucial Gujarat elections.