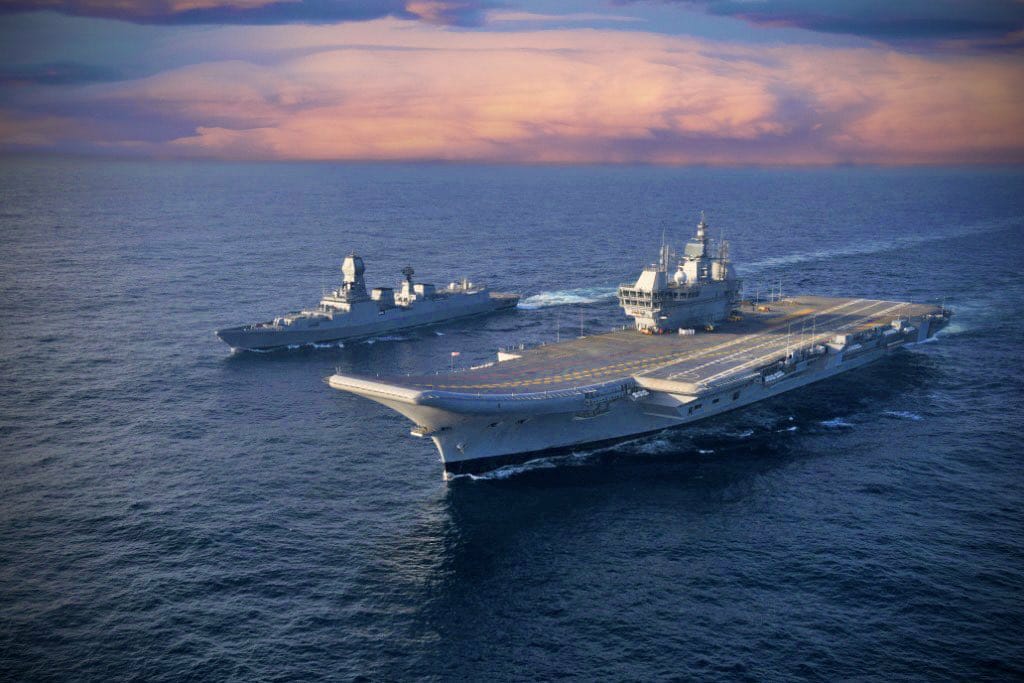 The vessel - 262m (860ft) long and almost 60m (197ft) tall - is the first aircraft carrier India has designed and built on its own. Photo courtesy: Twitter/@Jagadeeshsreddy

"Today, here on the coast of Kerala, every Indian is witnessing the sunrise of a new future. This event being held on the INS Vikrant is a shout out to India's rising spirits on the world horizon," the PM said in his address on the occasion.

"Be it offshore patrol vessels, submarines, or aircraft carriers, the strength of the Indian Navy is growing at an unprecedented pace. This will open new avenues of trade and prosperity not only for India, but also for other countries of the world, and especially for our neighboring allies," he added.

PM Modi also unveiled the new Naval Ensign (Nishaan), doing away with the colonial past on the occasion. Naval Ensigns are flags that naval ships or formations bear to denote nationality. The previous Indian Naval Ensign consisted of a St George's Cross - a red cross with white background. 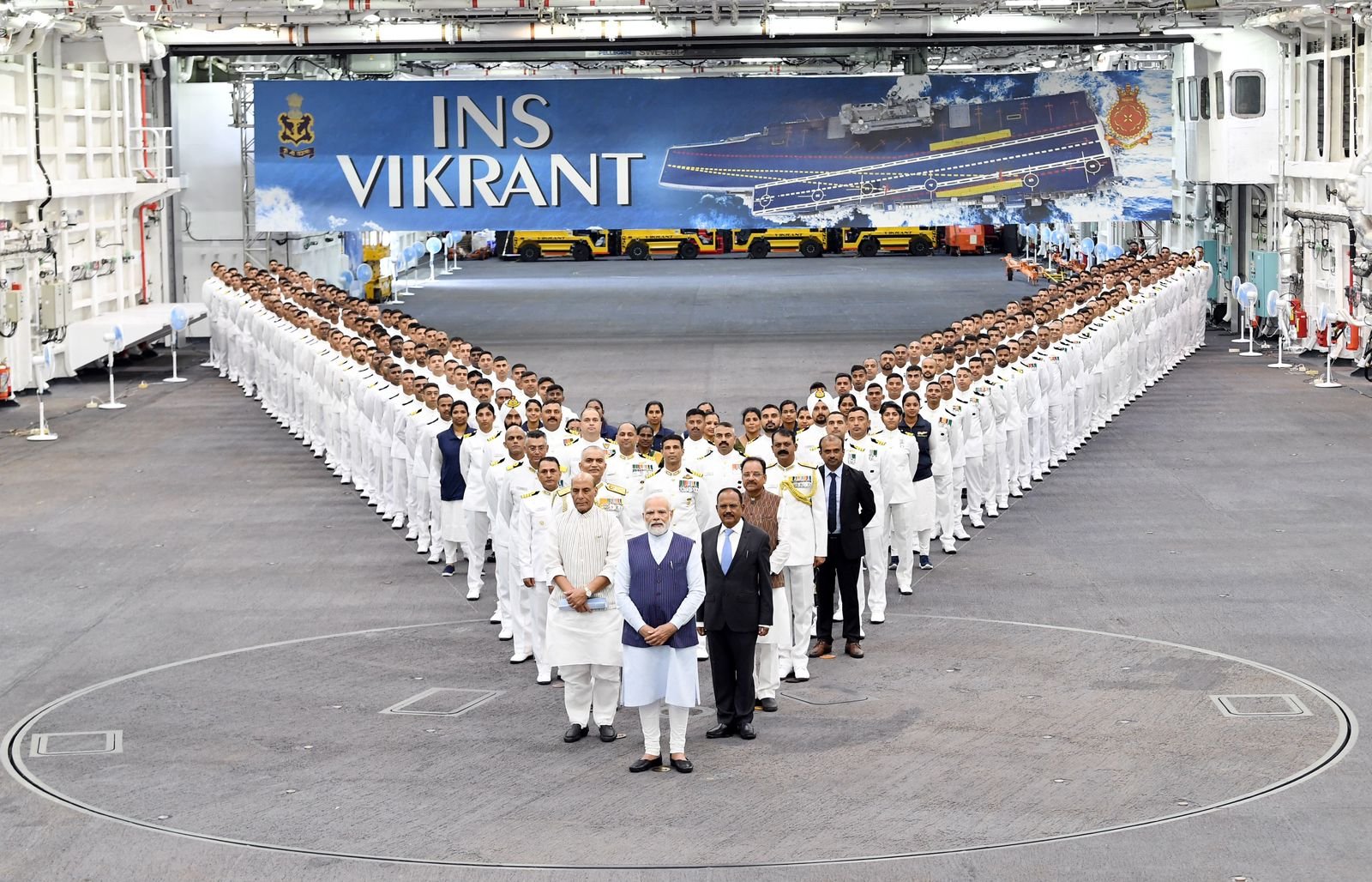 This ceremony to inaugurate INS Vikrant is a testament to India's rising footprint on the world stage, PM Modi said. Photo courtesy: Twitter/@ANI

‘Vikrant’ means courageous in Hindi. It was the name of India’s first aircraft carrier bought from the UK and commissioned in 1961. It played a stellar role in several military operations, the most prominent being the 1971 India-Pakistan war. The newly commissioned INS Vikrant carries this rich legacy of its predecessor which was decommissioned in 1997, an official release read.

INS Vikrant is 262 metres long, 62 metres wide, and has a height equivalent to 18 floors. It is capable of carrying 30 aircrafts and 1,600 crew members on board. The warship weighs 45,000 tonnes and has been built at a cost of INR 20,ooo crore. 500 Indian firms and 100 MSMEs were involved in building INS Vikrant. Its flight deck size of 12,500 sq m is equivalent to twoand-a-half hockey fields. The carrier is capable of operating 12 fighter planes and 6 helicopters at once.

It is a moment that was 13 years in the making.

The vessel - 262m (860ft) long and almost 60m (197ft) tall - is the first aircraft carrier India has designed and built on its own. It has the capacity to hold 30 fighter planes and helicopters.

India's other aircraft carrier, INS Vikramaditya, can carry more than 30 aircraft. The UK Royal Navy's HMS Queen Elizabeth can carry about 40 and the US Navy's Nimitz class carriers can accommodate more than 60 aircraft. 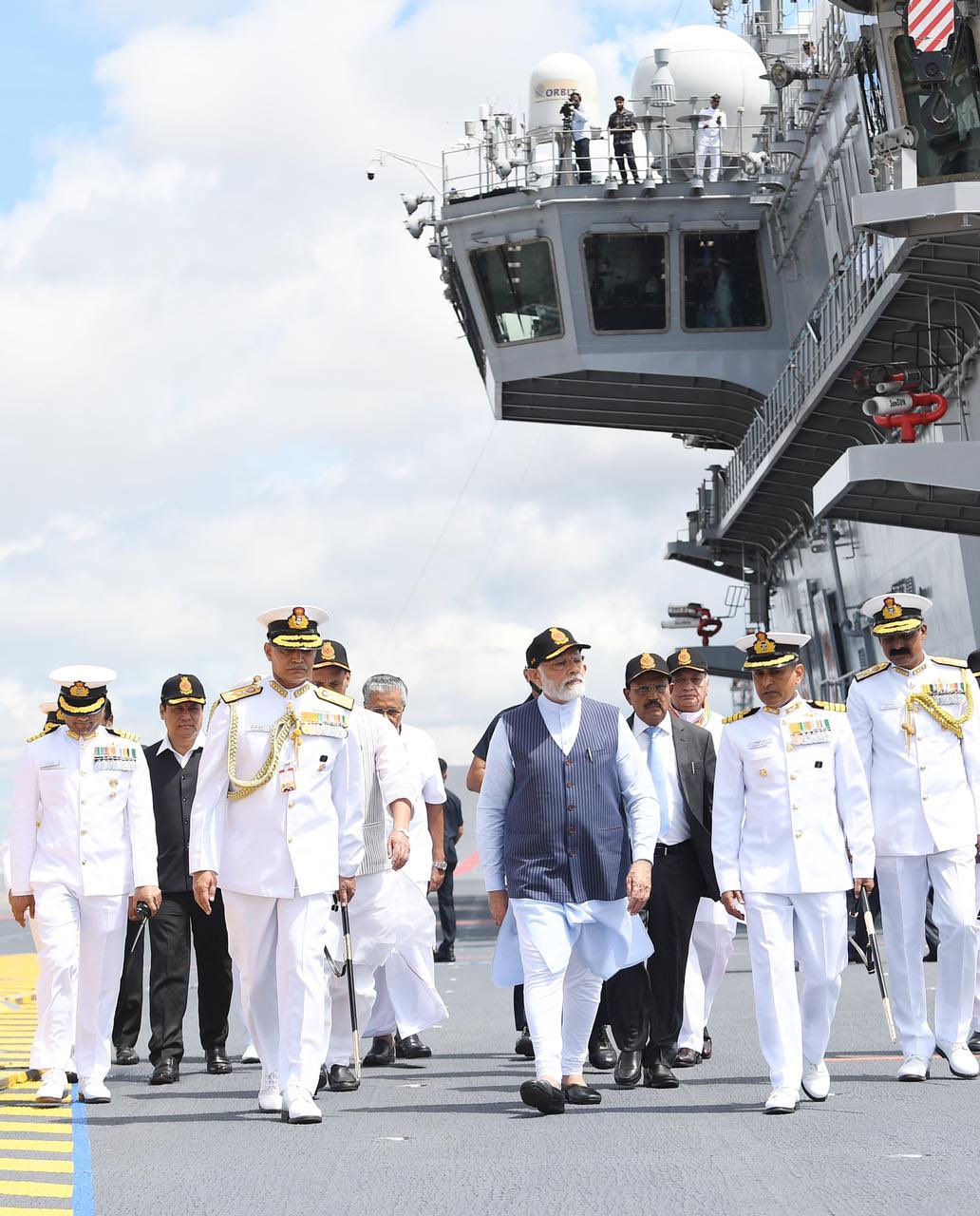 Retired Vice-Admiral AK Chawla, who until recently had supervised Vikrant's progress, says the choice is between acting now or being left out. He cites the example of China, which has expanded its maritime power by "building aircraft carriers at an amazing pace", the BBC reported.

"You can't build carriers overnight, it takes time and, therefore, it's very important that we have more ships like Vikrant which can protect our fleet, travel far and knock out enemy ships before they can get to the aircraft carrier or to other ships," he says.