Mortal remains of General Rawat to be brought to Delhi; probe ordered into helicopter crash

The mortal remains of India’s first Chief of Defence Staff (CDS) General Bipin Rawat and his wife Madhulika, who were killed in an Indian Air Force (IAF) helicopter crash yesterday in Tamil Nadu along with 11 other personnel of the armed forces, will be brought to New Delhi in a military plane today evening. 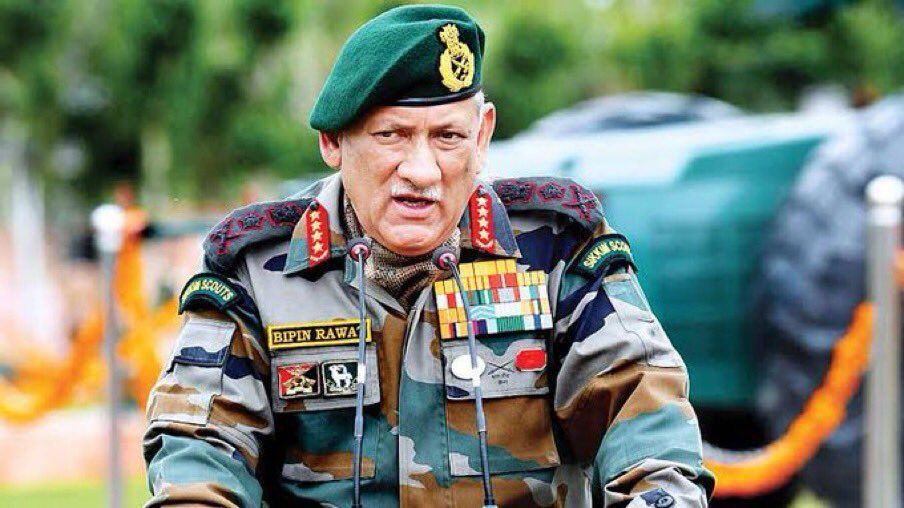 Rawat became the Vice-Chief of Army Staff before becoming the fourth officer from the Gorkha Brigade to become the COAS. Photo courtesy: Defence Ministry

Defence minister Rajnath Singh said that the tri-service inquiry team, which will be led by Air Marshal Manavendra Singh, reached Wellington on Wednesday itself and has already initiated its probe into the incident.

“The Indian Air Force has ordered a tri-service inquiry into the military chopper crash,” Rajnath Singh said in Lok Sabha.

IAF’s Mi-17 V5 helicopter with Rawat onboard crashed near Conoor in Tamil Nadu on Wednesday.

At least 13 persons died in the accident. Rawat, his wife, defence assistant, security commandos and an IAF pilot were on board the chopper when it crashed between Coimbatore and Sulur in Tamil Nadu.

Rawat was on his way to Defence Staff College in Wellington from the IAF base in Sulur near Coimbatore, as per sources.

Initially, the government had amended the Army rules to extend the age of superannuation from 62 years to 65 years, paving the way for the appointment, as per media reports.

The CDS is meant to be a single-point military advisor to the government, and to coordinate long-term planning, procurements, training and logistics of the three services — Army, Navy and the Air Force. CDS would also be the permanent Chief of Staff Committee (COSC).

Rawat had taken over the reins of the Indian Army from General Dalbir Singh Suhag on December 17, 2016, as the 27th Chief of Army Staff (COAS).

Born in Pauri, Uttarakhand on March 16, 1958, his family had been serving in the Indian Army for multiple generations.

Rawat’s  father Laxman Singh Rawat was from Sainj village of the Pauri Garhwal district and rose to the rank of Lt General.

An alumnus of the National Defence Academy (NDA) and the Indian Military Academy (IMA), Rawat was commissioned into the Indian Army in December 1978 in the same unit as his father, the fifth battalion of 11 Gorkha Rifles. The first CDS is a veteran of counterinsurgency warfare and has served in some of the most difficult terrains of India, including the northern and eastern commands, Business Standard reported.

During his 43 years in service, Rawat served as a Brigade Commander, General Officer Commanding-in-Chief (GOC-in-C) Southern Command, General Staff Officer Grade 2 at the Military Operations Directorate, Colonel Military Secretary and Deputy Military Secretary in the Military Secretary’s Branch and Senior Instructor in the Junior Command Wing. He was also a part of the United Nations Peacekeeping Force and has commanded a multinational brigade in the Democratic Republic of Congo.

Rawat became the Vice-Chief of Army Staff before becoming the fourth officer from the Gorkha Brigade to become the COAS.

He was instrumental in reducing the militancy in the Northeast, with one of the highlights of his career being the 2015 cross-border operation into Myanmar in which the Indian Army successfully responded to an ambush by NSCN-K militants.

He was also part of the planning for the 2016 surgical strikes, in which the Indian Army went across the Line of Control into Pakistan-occupied Kashmir. Rawat, it was reported, was monitoring the developments from South Block in New Delhi.