Modi: Will give a memorable welcome to President Trump

A day after official confirmation of his visit to India, US President Donald Trump indicated that the two countries may sign a trade deal while Indian Prime Minister Narendra Modi tweeted that he was “delighted” about the upcoming visit. 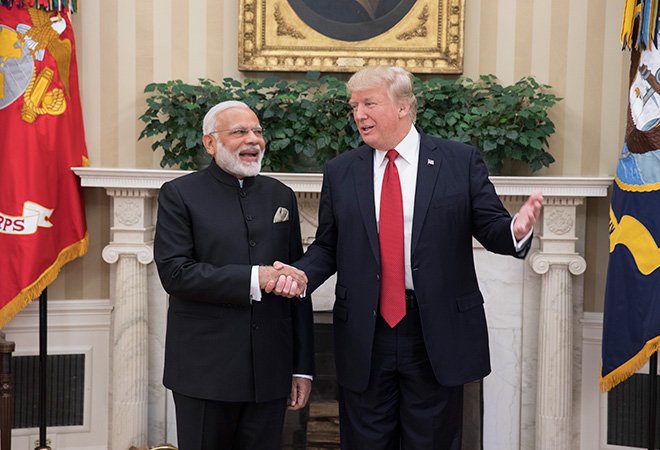 At the invitation of PM Modi, Trump is slated to travel to India on February 24 and 25. Photo courtesy: Twitter/@narendramodi

"India will accord a memorable welcome to our esteemed guests. This visit is a very special one and it will go a long way in further cementing India-USA friendship," PM Modi tweeted.

"India and USA share a common commitment to democracy and pluralism. Our nations are cooperating extensively on a wide range of issues. Robust friendship between our nations augurs well not only for our citizens but also for the entire world," added the Prime Minister.

Extremely delighted that @POTUS @realDonaldTrump and @FLOTUS will visit India on 24th and 25th February. India will accord a memorable welcome to our esteemed guests.

This visit is a very special one and it will go a long way in further cementing India-USA friendship.

At the invitation of PM Modi, Trump is slated to travel to India on February 24 and 25. In addition to New Delhi, he will stop in Ahmedabad in Gujarat to address a joint public meeting with the Indian Prime Minister.

"He (Modi) is a great gentleman and I look forward to going to India. So, we'll be going at the end of the month," President Trump told reporters in his Oval Office.

Trump also joked about PM Modi apparently telling him about the number of Indians who would be there to welcome him in Ahmedabad.

He told reporters that now he will "not feel good" about the size of the crowd that he addresses in the US which is usually between 40,000 to 50,000.

"He (Modi) said we will have millions and millions of people. My only problem is that last night we probably had 40 or 50,000 people... I'm not going to feel so good... There will be five to seven million people just from the airport to the new stadium (in Ahmedabad)," Trump said.

The two leaders are expected to jointly address a massive public rally at the newly built Motera Stadium in Ahmedabad.

Responding to a question, the president indicated that he is willing to sign a trade deal with India if it is the right one.

Trump and Modi met four times in 2019 including their joint address before a 50,000-strong crowd of Indian-Americans in Houston. The two also spoke on the phone recently about the upcoming visit.