In the long list of Indian revolutionaries who laid down their lives for the motherland is Madan Lal Dhingra. A lion heart who paid the ultimate price but got disowned by his family and his descendants continue to ignore Dhingra's  legacy. Poignant but true. 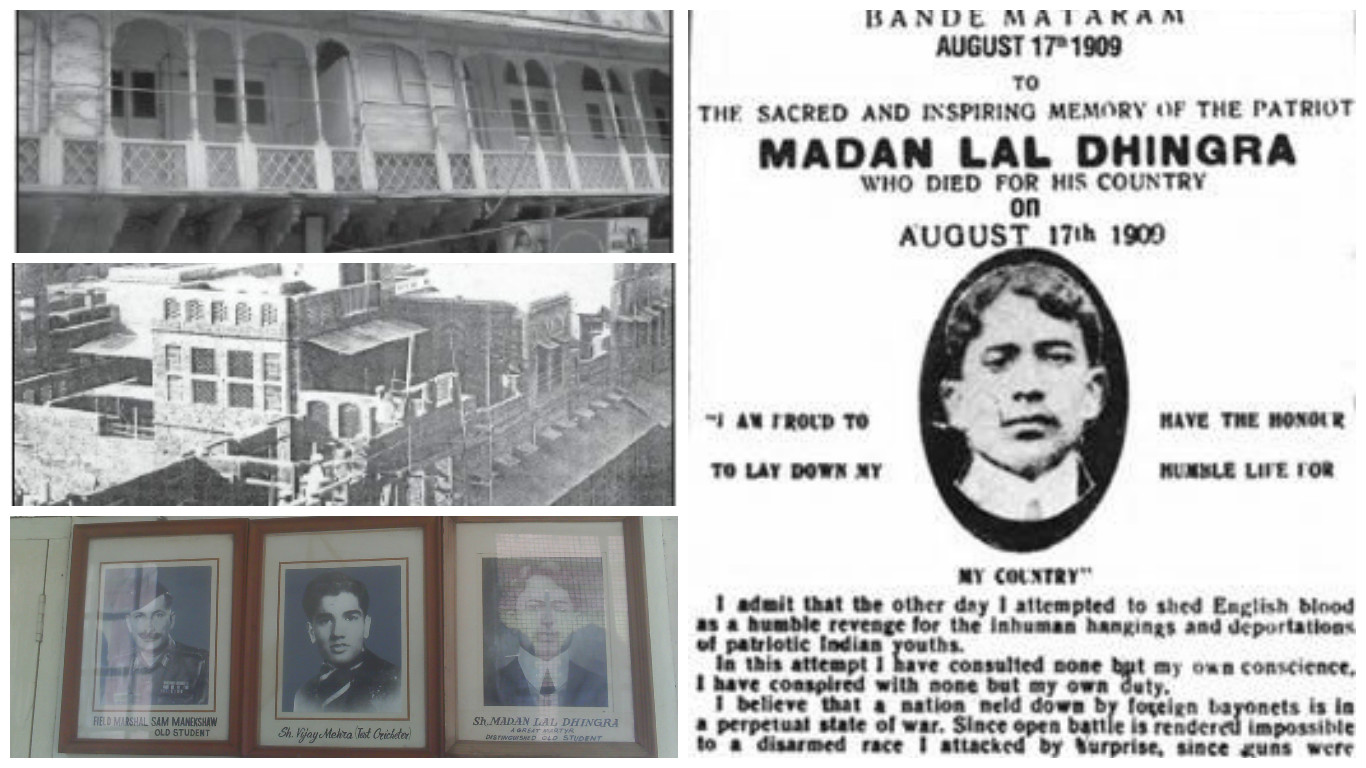 Madan Lal Dhingra was born in a well-to-do family in Amritsar, Punjab. He was the sixth of seven children of a civil surgeon. Dhingra studied in Amritsar’s MB Intermediate College until 1900 and later went to Lahore to study at the Government College University. In 1904, Dhingra led a student protest against the Principal’s order to have a college blazer made out of cloth imported from England. He was expelled from the college.

A student of Masters of Arts programme, he did a deep study of literature concerning the cause of Indian Poverty and famine. It was only during this time that he came under the influence of the nationalist Swadeshi movement. As a result, Swaraj and Swadeshi became his key issues.

For a brief period, Dhingra worked in India as a clerk, at Kalka in a Tanga service to transport British families to Shimla. He also worked as a factory labourer but was sacked as he tried to make a union there. He worked in Mumbai before following the advice of his elder brother Dr. Bihari Lal and going to England for further studies. In 1906 Dhingra went to England to get admission in University College, London to study Mechanical Engineering. at this time, Dhingra came in contact with Vinayak Damodar Savarkar, popularly known as Veer Savarkar, and Shyamji Krishna Varma. 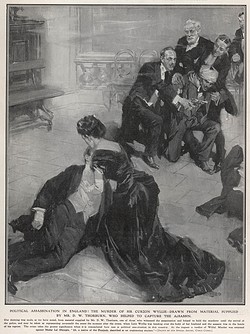 The assassination of Sir Curzon Wyllie at the Imperial Institute in London. Photo courtesy: My Malice and Bias blog page

On the evening of 1 July 1909, Madan Lal Dhingra joined the guests at the ‘At Home’ function hosted by the National Association at the Imperial Institute. As Sir Curzon Wyllie, the political aide-de-camp to the Secretary of State for India was leaving with his wife, Dhingra fired five shots at his face, of which four hit the target. Killing Sir Curzon on the spot, a Parsee doctor Cawas Lalcaca who tried to intervene was also killed by Dhingra’s sixth and seventh bullet. Dhingra attempted suicide but failed. He was arrested immediately. Sir Curzon Wyllie was a close friend of Dhingra's father, leading to him distancing himself from Madan Lal.

In 1905 Dhingra, while studying engineering in London, came in contact with Vinayak Damodar Savarkar. They met at Shyamaji Krishna Varma’s India House – a meeting place for Indian radicals located in Highgate.

Political activists Vinayak Damodar Savarkar and Shyamji Krishna Varma were impressed by his intense patriotism and turned his focus to the freedom struggle. Savarkar inspired Dhingra and gave him arms training.

Later, he was spotted regularly at a shooting range on Tottenham Court Road. He was said to be a member of Abhinav Bharat Mandal, a secretive society founded by Savarkar and his brother Ganesh.

Before assassinating Sir Curzon, Dhingra had tried to kill Lord Curzon, Viceroy of India. He had also planned to assassinate the ex-Governor of Bengal, Bramfield Fuller, but the attempt failed as he was late for the meeting the two were supposed to attend.

Due to his political activities, Madan Lal Dhingra was disowned by his father Gitta Mall, who was the Chief Medical Officer in Amritsar. He even published his decision in newspaper advertisements. 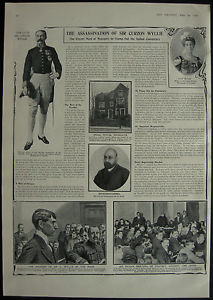 Madan Lal Dhingra was tried on July 23, 1909, at the Old Bailey. He represented himself during his trial where he claimed he did not regret killing Curzon Wyllie.

After the judge announced his verdict, Dhingra stated, "I am proud to have the honour of laying down my life for my country. But remember, we shall have our time in the days to come."

During the trial, Dhingra made the following statement in the court

"I do not want to say anything in defense of myself, but simply to prove the justice of my deed. As for myself, no English law court has got any authority to arrest and detain me in prison or pass sentence of death on me. That is the reason I did not have any counsel to defend me."

"And I maintain that if it is patriotic in an Englishman to fight against the Germans if they were to occupy this country, it is much more justifiable and patriotic in my case to fight against the English. I hold the English people responsible for the murder of 80 millions of Indian people in the last fifty years, and they are also responsible for taking away £100,000,000 every year from India to this country. I also hold them responsible for the hanging and deportation of my patriotic countrymen, who did just the same as the English people here are advising their countrymen to do. And the Englishman who goes out to India and gets, say, £100 a month, that simply means that he passes a sentence of death on a thousand of my poor countrymen because these thousand people could easily live on this £100, which the Englishman spends mostly on his frivolities and pleasures.  Just as the Germans have no right to occupy this country, so the English people have no right to occupy India, and it is perfectly justifiable on our part to kill the Englishman who is polluting our sacred land. I am surprised at the terrible hypocrisy, the farce, and the mockery of the English people. They pose as the champions of oppressed humanity—the peoples of the Congo and the people of Russia—when there is terrible oppression and horrible atrocities committed in India; for example, the killing of two millions of people every year and the outraging of our women. In case this country is occupied by Germans, and the Englishman, not bearing to see the Germans walking with the insolence of conquerors in the streets of London, goes and kills one or two Germans, and that Englishman is held as a patriot by the people of this country, then certainly I am prepared to work for the emancipation of my Motherland. Whatever else I have to say is in the paper before the Court I make this statement, not because I wish to plead for mercy or anything of that kind. I wish that English people should sentence me to death, for, in that case, the vengeance of my countrymen will be all the keener. I put forward this statement to show the justice of my cause to the outside world, and especially to our sympathisers in America and Germany."

"I have told you over and over again that I do not acknowledge the authority of the Court, You can do whatever you like. I do not mind at all. You can pass sentence of death on me. I do not care. You, white people, are all-powerful now, but, remember, it shall have our turn in the time to come, when we can do what we like."

After the verdict was announced and he was being removed from the court, he said to the Chief Justice, "Thank you, my Lord. I don't care. I am proud to have the honour of laying down my life for the cause of my motherland."

He was hanged on August 17, 1909. In his last words, he prayed to be reborn an Indian to fight and die for the revolution is needed.

"I believe that a nation held down by foreign bayonets is in a perpetual state of war. Since the open battle is rendered impossible to a disarmed race, I attacked by surprise. Since guns were denied to me I drew forth my pistol and fired. Poor in wealth and intellect, a son like myself has nothing else to offer to the mother but his own blood. And so I have sacrificed the same on her altar. The only lesson required in India at present is to learn how to die, and the only way to teach it is by dying ourselves. My only prayer to God is that I may be re-born of the same mother and I may re-die in the same sacred cause till the cause is successful. Vande Mataram!" - Madan Lal Dhingra 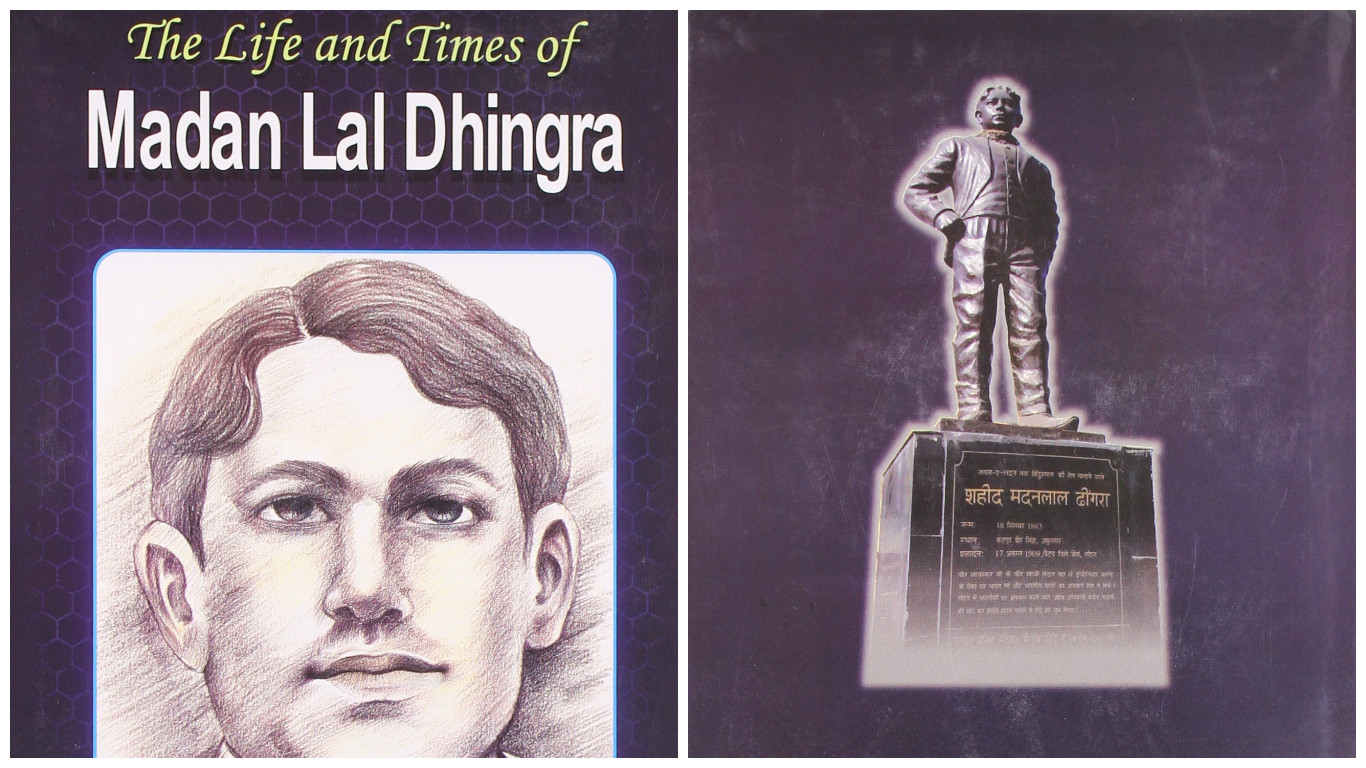 The Life and Times of Madan Lal Dhingra written by the author Vishwa Bandhu.

After the execution, Madan Lal Dhingra’s body was denied Hindu rites and was buried by British authorities. Since his family had disowned him long ago, the British authorities refused to turn his body over to Savarkar. Dhingra’s coffin was accidentally found while authorities were searching for the remains of Shaheed Udham Singh. His remains were repatriated to India 67 year after his death on December 12, 1976. His ashes were named after him in one of the squares in the city of Akola, Maharashtra.

Descendants continue to ignore his legacy 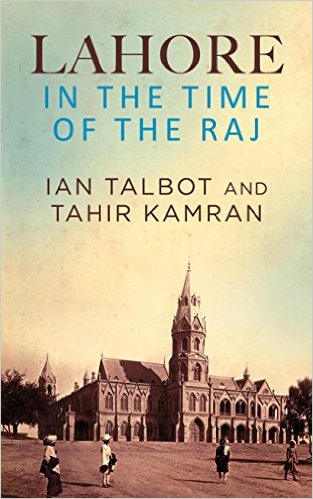 Madan Lal Dhingra has found a mention in the book - Lahore: In the Time of the Raj written by Ian Talbot & Tahir Imran.

Madan Lal Dhingra also finds a mention in a book – ‘Lahore: In the Time of the Raj’, written by Ian Talbot & Tahir Imran. A park built in memory of Dhingra in near Panj Peer, Dera Panj Peer, Golden Avenue in Amritsar is also in an utter state of neglect.

His family may continue to ignore his sacrifice, but he will live on in the hearts of millions. 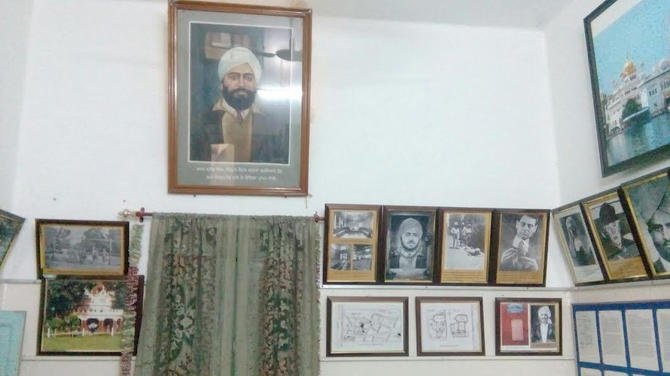