Indians on holiday among eight killed in south England mishap

Indians were among eight persons killed in a road accident in southern England after their mini bus got crushed between two trucks, officials said. Some of those on board the minibus were on holiday from India and visiting their families in the UK. “We are extending all possible assistance to those affected by this tragedy,” the Indian High Commission in London said. 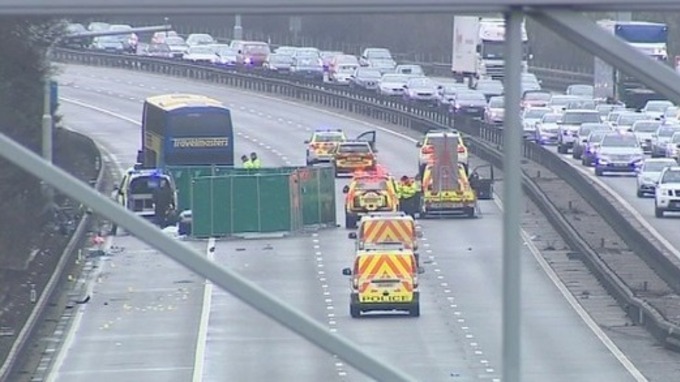 The scene of the accident. Photo courtesy: ITV

British police are yet to release details of those killed in the crash. The driver of the minibus has been locally identified as India-born Cyriac Joseph. A five-year-old girl, a woman and a man are being treated in a hospital with life-threatening injuries, while another woman has serious injuries. The two truck drivers have been arrested, one of them on suspicion of driving while over the alcohol limit.

Both men are being questioned on suspicion of causing death by dangerous driving and are in police custody. The crash occurred on the southbound M1 highway at Newport Pagnell in Buckinghamshire. South Central Ambulance Service said those injured in the collision were taken to hospitals in Milton Keynes, Coventry and Birmingham. Pictures from the crash site show extensive damage to the vehicles involved, including a FedEx vehicle and one belonging to AIM Logistics.

“We would like to express our deepest sympathy to the families who have lost loved ones and also those whom have been injured at this very sad time,” said Ismail Elmagdoub, director of AIM Logistics, based in Evesham, Worcestershire. “Road safety and compliance is of the utmost importance to AIM Logistics and we are continuing to assist the police as much as possible with their inquiries,” he said.