The Union health ministry has taken a number of steps to minimise the risk of disease importation as well as to boost requisite public health and clinical interventions for managing monkeypox, Minister of State for Health Bharati Pravin Pawar told the Rajya Sabha. 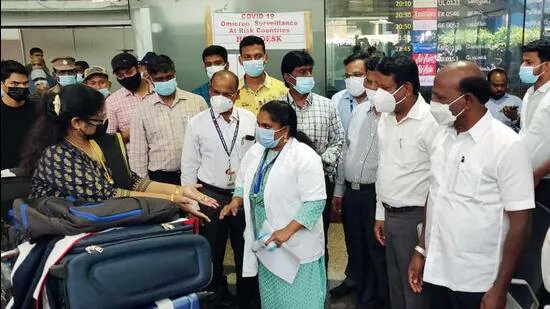 The guideline has also been made available on the Union health ministry's website. Photo courtesy: Twitter/@BNNBreaking

According to the World Health Organisation, as on July 4, 4,920 laboratory confirmed cases of monkeypox have been reported from the European region, which is seeing an increasing trend of cases. Most of these cases are being reported from Spain, the United Kingdom, Germany, France and the Netherlands, Pawar said in a written reply.

India's first case was reported on July 14 in a man travelling to Kerala. Following this, a high-level central multi-disciplinary team of experts has been deployed to assist the southern state's health department in its outbreak control and containment efforts, Pawar said, the NDTV reported.

A 31-year-old man from Kannur in Kerala, who returned from Dubai, tested positive for monkeypox on Monday making it the second confirmed case of the disease in India.

"The Ministry of Health has taken a number of steps to minimise the risk of disease importation as well as to strengthen requisite public health and clinical interventions for management of monkeypox disease," Ms Pawar said in her reply.

As a key measure to contain the disease in the country, Ms Pawar said all airport and port health officers have been instructed to remain vigilant and rigorously screen incoming international passengers.

The NIV Pune (BSL-4 laboratory) under the Indian Council of Medical Research has been designated as the referral laboratory for testing of suspected cases. In addition, 14 other ICMR-VRDL network laboratories have been operationalised to undertake diagnostic testing for monkeypox.

Instructions on sample packaging and transport have been shared with all states and union territories, she said.

The State and District Surveillance Officers (SSOs) under Integrated Disease Surveillance Programme (IDSP) of all states and union territories have been instructed to intensify surveillance activities for monkeypox.

The Ministry of Health has prepared and circulated to all stakeholders 'Guidelines on Management of Monkeypox Disease' covering all aspects to manage the disease, including case definitions, surveillance strategies, clinical management, infection prevention and control and risk communication among others, the minister said.

The guideline has also been made available on the Union health ministry's website.