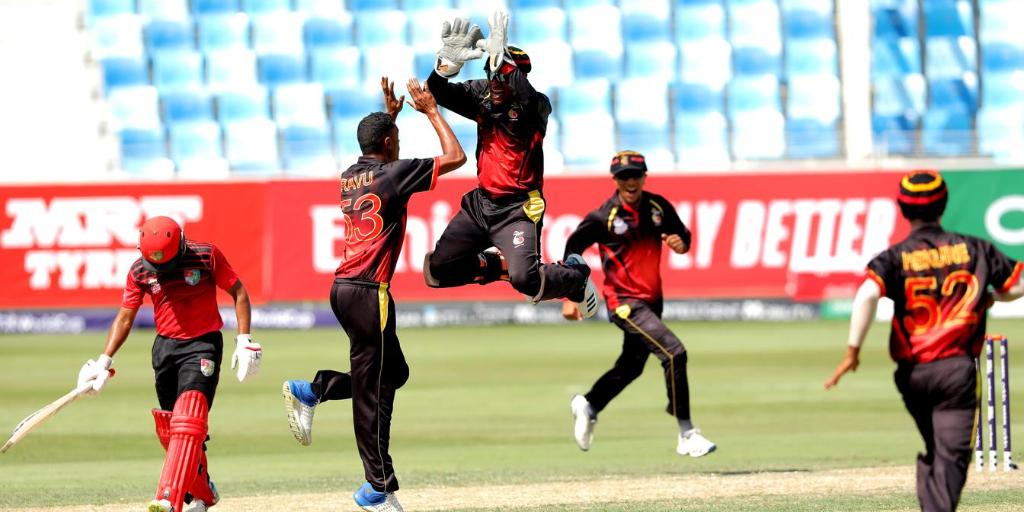 Singapore suffered their third successive defeat in the ongoing ICC T20 World Cup Qualifier, losing to Papua New Guinea (PNG) by 43 runs. The result means that they cannot directly qualify for the First Round of the T20 World Cup next year as only the teams topping the two groups in the Qualifier get a direct pass to the main tournament. They can however still make it to the main tournament through the playoffs.

Put in to bat by Singapore, PNG made a brisk start to their innings with openers Tony Ura and Assad Vala handling everything the Singapore bowlers threw at them with ease. PNG lost their first wicket with 61 runs on the board when Vala was dismissed by Tim David for 24 off 18 balls.

PNG are off to a flier!

Param got two in two when he dismissed Lega Siaka off the very next ball but next batsman in Sese Bau fended off the hat-trick ball to deny the Singaporean.

Singapore skipper Amjad Mahboob had Bau bowled in the thirteenth over and with PNG at 101/4, it looked like Singapore had stemmed the run flow and would manage to restrict PNG, who have suffered only one loss this tournament.

PNG excellent yet again in the #T20WorldCup Qualifier. They need to defend 181 to make it four wins from five.#T20WorldCup | #PNGvSIN | FOLLOW ⬇️ https://t.co/8Ou7fImaNv pic.twitter.com/5VCvxuiYph

Singapore’s chase began disastrously when an unfortunate dismissal saw Surendran Chandramohan depart off the first legal ball of the innings, following a wide first ball. Rezza Gaznavi, who was on strike, chipped and mistimed the ball towards Amini. Chandramohan tried to slide his bat in to beat Amini's throw but the bat got stuck and Amini hits the stumps, leaving Singapore at 1/1.

Rohan Rangarajan hit four boundaries in his innings of 27 off 26 balls but couldn’t keep up the momentum, falling in the sixth over. And when Gaznavi was dismissed off the very next ball, Singapore were in deep trouble at 37/3.

Tim David was the only Singapore batsman who provided any resistance, hitting a quickfire 44 off 26 balls. However, he found little support from the other end as wickets crumbled around him.

Aritra Dutta (11 off 16 balls) and Manpreet Singh (1 off 4 balls) fell in consecutive overs while David and Janak Prakash followed soon after - both dismissed in the 15th over. Singapore at 101/7 with a loss looking more and more likely.

Two in two for Ravu, he's on a hat-trick!

Singapore are three down in the Powerplay and already need more than 10 runs an over to chase PNG's total down.#T20WorldCup | #PNGvSIN | FOLLOW ⬇️ https://t.co/8Ou7fImaNv pic.twitter.com/VstYnGl7sX

Eventually Singapore could only manage 137/9 in their 20 overs, falling 43 runs short of the target to hand Papua New Guinea their fourth win in five matches.

Singapore now have their last game of the group stage on Saturday, against Namibia, which means they can get to a maximum of 6 points, still leaving them behind PNG who are on 8 points. However, Singapore may still have a chance to qualify for the main event through the playoffs.