The vigilant eyes of Immigration & Checkpoints Authority (ICA) officers caught a Malaysian motorcyclist allegedly trying to smuggle 1,169 packets of chewing tobacco in his shoes and other belongings at the Woodlands Checkpoint. 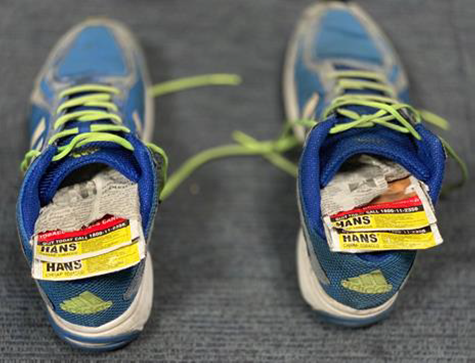 A Malaysian motorcyclist hid 1,169 packets of chewing tobacco in his shoes and other belongings at the Woodlands Checkpoint. Photo courtesy: Facebook page of ICA

ICA officers stopped the 50-year-old man for further checks at about 4.45am yesterday, the authority said in a Facebook post.

The person had hidden a total of 1,169 packets of chewing tobacco in the motorcycle’s carrier box, raincoat bag, haversack and inside his shoes.

The case has been referred to the Health Sciences Authority.

“Our borders are our first line of defence in safeguarding Singapore’s security. The ICA will continue to conduct security checks on passengers and vehicles at the checkpoints to prevent attempts to smuggle in undesirable persons, drugs, weapons, explosives and other contrabands,” said ICA in the post.

Earlier, ICA officers had caught two Malaysians for attempting to smuggle contraband cigarettes through Woodlands Checkpoint about two weeks ago.

In one of the cases, officers found 460 packets of cigarettes hidden in a vehicle’s modified fuel while in the second incident, 30 cartons of cigarettes were found in the speaker compartment of a car boot.