As 2021 ends, Twitter has unveiled the top trending tweets and hashtags that unfolded the year across India. 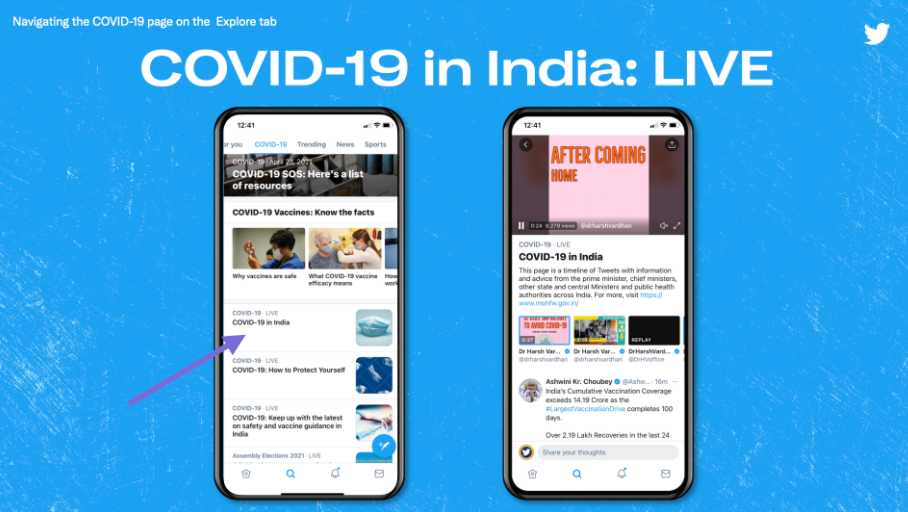 The year witnessed people leveraging the micro-blogging platform to connect with strangers amid a second Covid-19 wave and also turning the service into a real-time helpline, or forging friendships and announcing them to the world through hashtags like #WeMetOnTwitter.

Besides, people also communicated via Twitter Spaces, a feature that allows users to have live audio conversations on the platform. Spaces encouraged and unlocked real, open conversations on the micro-blogging site with an authenticity, nuance, depth and power only the human voice can bring.

Pat Cummins’ tweet about his donation to Covid relief in India

While India battled the second Covid wave, people from across the globe came in support for the citizens. Among them was Australian cricketer Pat Cummins (@patcummins30), who had donated $50,000 towards Covid relief in India and encouraged others on Twitter to do the same.

Twitter India on Thursday acknowledged Cummins' heart-warming gesture as his statement became the most retweeted and quote-tweeted tweet of the year. "@patcummins30's gesture touched our hearts to become the most Retweeted and Quote Tweeted Tweet of 2021," announced Twitter India.

Virat Kohli tweeted on January 11, 2021 announcing the birth of his daughter Vamika. The tweet was liked over 539k times and has over 50k retweets.

Prime Minister Narendra Modi’s tweet about receiving his first vaccine shot became the most retweeted tweet of the year. The tweet also expressed gratitude to doctors, scientists and medical workers for their undeterred contribution towards the Covid-19 battle.

Took my first dose of the COVID-19 vaccine at AIIMS.

Remarkable how our doctors and scientists have worked in quick time to strengthen the global fight against COVID-19.

I appeal to all those who are eligible to take the vaccine. Together, let us make India COVID-19 free! pic.twitter.com/5z5cvAoMrv

This October, the Tata Group welcomed back Air India into its fold - after nearly seventy years of the airlines being state-owned. Expressing his delight at the development, Ratan Tata, Chairman Emeritus of Tata Sons, Tweeted a heartfelt note saying, “Welcome back, Air India”, with an iconic picture of the early Air India planes. The post then became the most retweeted tweet in business.

Hashtags like #Covid-19, #Bitcoin, #FarmersProtest, among others dominated this year on the micro-blogging platform.

1.#Covid19: Right in the early months of 2021, India was hit by the second wave of Covid-19, leaving people distraught. As citizens took to Twitter in search of information, they found help. People on the service volunteered to find resources, mobilise help and connect people with leads for #oxygen, hospital beds and medical supplies. While the second wave inspired an unprecedented movement of humanity on Twitter, the beginning of vaccination drives also brought a ray of hope, and people continued to stay connected on Twitter with #Covid19.

2.#FarmersProtest: Conversations around the #FarmersProtest continued from 2020 into 2021. Politicians, celebrities, citizens and protesting farmers took to Twitter alike to share and exchange opinions, making it one of the most Tweeted hashtags in India this year.

3.#TeamIndia: 2021 was a busy year for Indian sport - and so was it for the sports community on Twitter. From the men’s cricket team’s historic win at the Gabba to an unprecedented run at the Olympics and the Paralympics - sports fans on Twitter cheered on for #TeamIndia across games, matches and tournaments - turning Twitter into a virtual stadium that was always roaring their support for our athletes.

4.#Tokyo2020: With #TeamIndia finishing at a total tally of seven medals at the Olympics and 19 medals at the Paralympics, the #Tokyo2020 Games were all the talk on Twitter. People took to the service to support their favourite athletes at the Games and made sure to celebrate each of India's wins across the season.

5.#Bitcoin: A conversation that gained momentum on Twitter this year was around cryptocurrency and digital assets. Twitter has become the home for crypto conversation and #Bitcoin made it to the list of most popular conversations of the year.

Besides, several other conversations across categories kept people engaged and tweeting that include #Afghanistan, #CGL19marks, #IndianArmy and #Uttarakhand.