The first track from Secret Superstar, Main Kaun Hoon, is out. It features Zaira Wasim, the protagonist of the film.

Sung by Meghna Mishra, the music of the song is composed by Amit Trivedi and lyrics are by Kausar Munir. 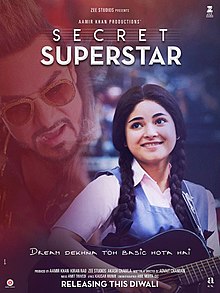 Secret Superstar, whose trailer was launched in Singapore, traces the journey of Insia, a 14-year-old girl from Baroda, who wants to become a pop star but faces stiff resistance, as far as one can make out from the trailer, from her father. Complete with a silent but supportive mother, extremely conformist and conservative father, a rebellious young girl steals everyone’s attention on the internet.

The movie promises to be an engaging affair, which will hit the big screens this Deepavali on October 19.

Zee Studios International is distributing the film in Singapore.