Election Commissioner calls for NRIs to register to vote

Highlighting the increasing role of overseas Indians in the election process, Election Commissioner Sushil Chandra on Tuesday called on all Non-Resident Indians (NRIs) to register online to boost the numbers of such voters ahead of provisions being put in place for either proxy voting or voting through embassies and missions for them in upcoming polls. 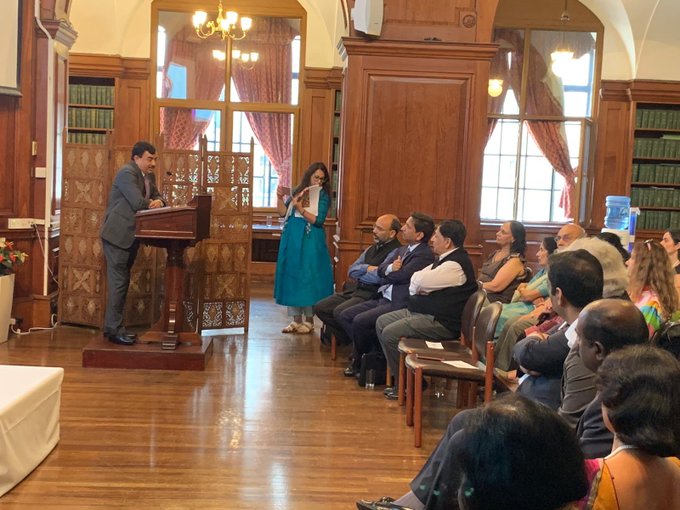 EC Chandra, part of the three-member panel of election commissioners in India, said that only 1.15 lakh NRI voters had registered in time for the 2019 general election. Photo courtesy: Twitter/@HCI_London

Addressing a gathering of the Indian Professionals Forum (IPF) at the Indian High Commission in London on ‘Decoding Indian General Election 2019’, Chandra said the ease of NRI voting remains a focus for the Election Commission so that all Indians anywhere in the world can participate in its democracy.

Chandra, part of the three-member panel of election commissioners in India, said that only 1.15 lakh NRI voters had registered in time for the 2019 general election, which is not an entirely reflective figure for India’s NRI voter base.

He indicated that besides proxy voting, the Election Commission is also looking at the option of using the electronic voting technique currently in use by diplomatic staff worldwide.

"We are searching for options, the proxy voting bill had been cleared by the Lok Sabha but lapsed in the Rajya Sabha. But we want they should be able to vote. We want to be ahead of each and every country in the world,” said Chanrda.

At present, registered NRI voters have to be physically present in their constituency in India to cast their ballots.