With only a few days to go, the fog surrounding the United Kingdom’s elections shows no signs of dissipating with the Conservatives, Labour and other parties locked in their struggle to capture the hearts and minds of the voters.

British-Indians have been playing a more active role in campaigning than usual, with organisations such as the Overseas Friends of BJP’s (OFBJP) UK chapter throwing their weight behind the Tories following Labour’s perceived anti-Kashmir stance.

There has also been pushback against the OFBJP from the Indian community in various constituencies such as Harrow, with the traditionally Labour-friendly voters calling the overseas body’s actions an overreaction by the Indian BJP government.

Leading up to the elections, Connected to India takes a look at some of the prominent Indian-origin candidates who are campaigning furiously across the UK. The following are four British-Indian Tory MPs fighting to retain their seats: 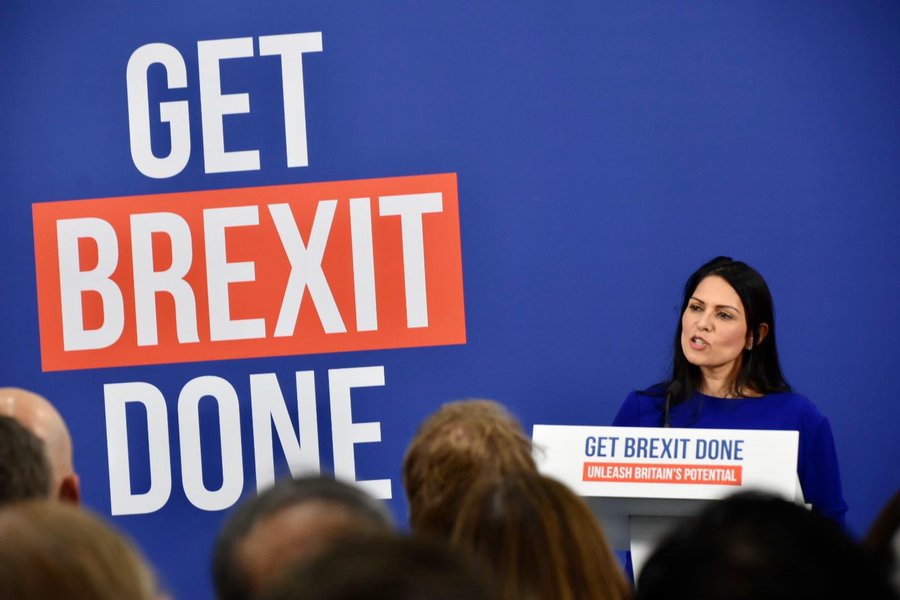 Patel has spoken out about increasing border security and launching a points-based immigration system in her campaign. Photo courtesy: Twitter/@patel4witham

Hours after Boris Johnson was appointed by the Queen as Britain’s new prime minister in July, he named Priti Patel, one of the most vocal Brexiteers in the Tory Party, Home Secretary. This was a historic moment as Patel became the first ethnic minority woman to hold the office.

Born in London to a Ugandan-Indian family, Patel was educated at Keele University and the University of Essex. The self-proclaimed Thatcherite and former member of the Referendum Party has in the past been criticised for her support of the alcohol and tobacco industries and had been forced to resign from the post of International Development Secretary in the Theresa May Cabinet over allegations of unauthorised meetings with Israeli officials.

Most recently, she was involved in a Twitter war with Labour MP Yvette Cooper over the release of London Bridge attacker Usman Khan last year.

Patel has spoken out about increasing border security and launching a points-based immigration system in her campaign and has been active throughout the country in many marginal seats, urging voters to give the Conservatives a proper majority. 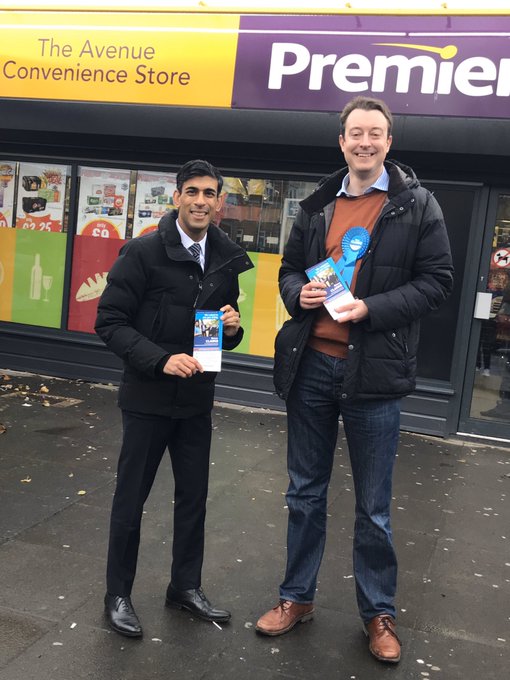 Rishi Sunak, the former Chief Secretary to the Treasury under Johnson, has been hailed as the Tories’ “next bright young thing” after the 39-year-old Indian origin MP represented the Conservative Party in two live TV debates on BBC TV and ITV with rival political leaders.

Sunak’s grandparents were born in Punjab, India and emigrated to the United Kingdom (UK) from East Africa in the 1960s. Born in Southampton, Hampshire, Sunak was Head Boy at Winchester and studied Philosophy, Politics and Economics (PPE) at Lincoln College, Oxford. After graduating, he obtained an MBA from Stanford University, where he was a Fulbright scholar. Sunak is also the son-in-law of Infosys co-founder Narayana Murthy.

With opinion polls indicating that the Tory lead over Labour is narrowing in the closing days of the election campaign, Sunak has been busy defending the government’s record on everything from the National Health Service to security in the light of the London Bridge attack, immigration and Brexit. 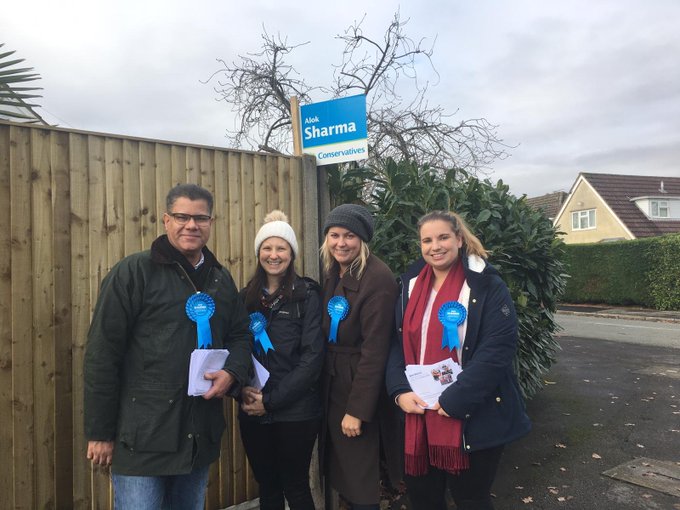 Sharma was elected as the MP for Reading West in 2010, winning a majority of 6,004. In the 2017 general election, he won his seat with a reduced majority of 2,876. Photo courtesy: Twitter/@AlokSharma_RDG

Alok Sharma was appointed the International Development Secretary in the Johnson cabinet in July 2019. He has been the MP for Reading West since 2010, and a YouGov poll has predicted he would get 48 per cent of the vote in Reading West to retain his seat. These estimates are based on 100,319 interviews conducted across the UK over seven days and have a stated margin of error, but correctly predicted the result in 2017.

Sharma was born in Agra, India, but moved to Reading with his parents when he was five years old. Sharma was elected as the MP for Reading West in 2010, winning a majority of 6,004. In the 2017 general election, he won his seat with a reduced majority of 2,876.

Sharma supported the opening of one of the first free schools in England in his constituency and is a recent Brexit supporter. 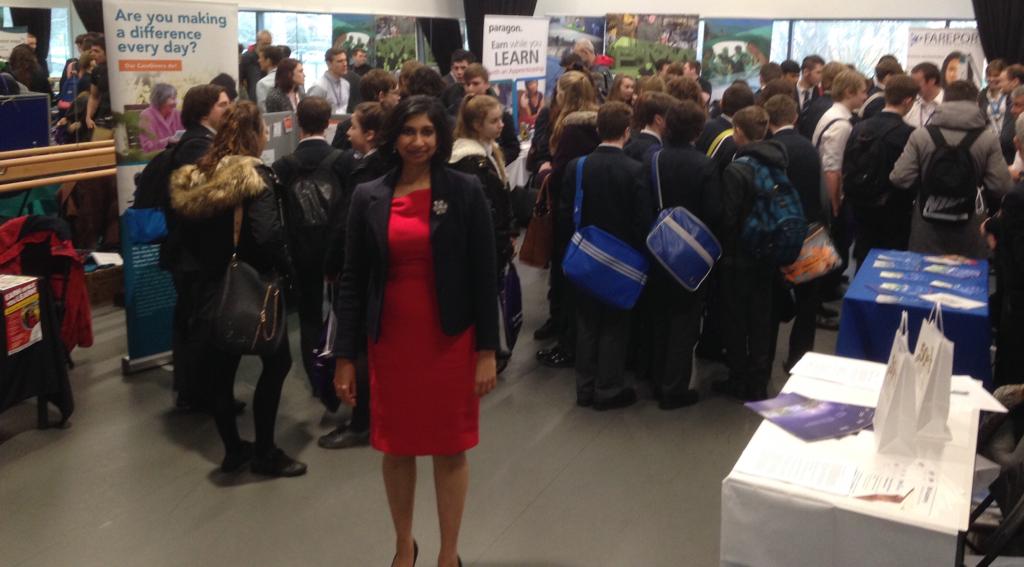 Braverman enjoyed 56 per cent of the vote in the 2015 election - and then 63 per cent in the 2017 election after the Brexit referendum. Photo courtesy: Suella Braverman's newsletter

Suella Braverman, the former Parliamentary Under-Secretary of State for Exiting the European Union, is one of the earliest pro-Brexiteers. Born to Christie and Goan-origin Uma Fernandes in Harrow, London, Braverman read Law at Queens' College, Cambridge, and completed a Master's degree in European and French Law at Pantheon-Sorbonne University.

After losing to long-time Labour MP from Leicester East Keith Vaz in the 2005 polls, she practiced as a barrister till the 2015 election, which she contested from Fareham.

Braverman enjoyed 56 per cent of the vote in the 2015 election - and then 63 per cent in the 2017 election after the Brexit referendum. She chaired the pro-Brexit European Research Group within the Conservative party from 2017-2018.

Her pro-Brexit stance is a reflection of her constituency - 55.1 per cent of the 32,000 votes cast in the Brexit referendum from Fareham were to leave the European Union.

The YouGov poll has predicted that Braverman will retain her seat from Fareham with the Conservatives gaining a large majority this time around.