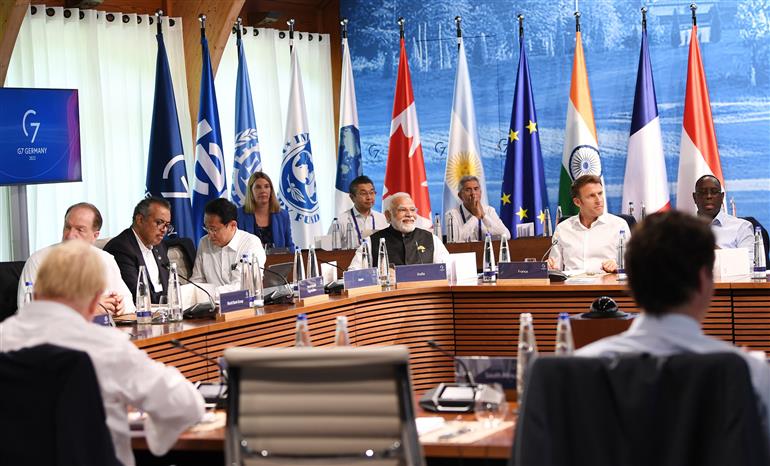 “PM @narendramodi concludes his visit to Germany for the G7 Summit, wrapping up two days of productive discussions on sustainable solutions to global challenges, PM Modi now emplanes for Abu Dhabi for a brief stopover before reaching New Delhi,” the Ministry of External Affairs tweeted.

PM Modi in Abu Dhabi conveyed his personal condolences on the passing away of Sheikh Khalifa bin Zayed Al Nahyan, the former UAE President and Abu Dhabi ruler, who had been in office since 2004. He died at the age of 73 after a prolonged illness on May 13.

During a special briefing ahead of the PM’s visit on June 24, India’s foreign secretary, Vinay Kwatra said, “The Prime Minister will be travelling to the United Arab Emirates on June 28 to pay personal condolences on the passing away of His Highness Sheikh Khalifa Bin Zayed Al Nayhan, the former UAE president and Abu Dhabi Ruler. At the same time, this will be the Prime Minister's first meeting with His Highness Sheikh Mohammed bin Zayed Al Nayhan since his election as the new President of the UAE and the Ruler of Abu Dhabi.”

The visit also comes in the wake of the controversy around remarks made by a BJP spokesperson about Prophet Muhammad. The UAE had also issued a statement raising concerns about the matter. On being asked whether or not the issue will come up when the leaders meet, Kwatra said, “Almost all West Asian nations have a clear understanding of India’s position and the situation on this issue. We have specified it on various platforms. PM Modi is visiting the UAE for two main agendas. To pay condolences for the demise of the ruler of UAE and to meet the new President.”

The Foreign Secretary did not specify the contours of what will be discussed between the leaders but emphasised the enhanced relations that the two nations share.

“When it comes to relations between India and the UAE, they are diverse and robust. Energy security has been an important part of bilateral ties and so have been people-to-people ties, along with other areas of climate, trade, education, and culture. When the leaders meet, enhancing cooperation in all these areas will be discussed. Can’t specify details before the meeting,” he added.