Indian Prime Minister Narendra Modi and his British counterpart Boris Johnson met in Biarritz, France on Sunday on the sidelines of the G7 summit. The two leaders discussed ways to strengthen bilateral cooperation in trade and investment, defence, security and other key areas. 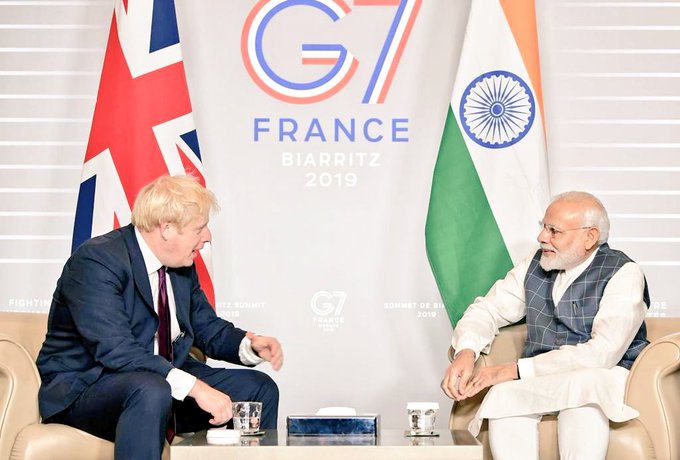 This is the first meeting between the Indian and British leaders against the backdrop of the Modi government revoking the special status to Jammu and Kashmir. Photo courtesy: Twitter/@MEAIndia

India has been invited by French President Emmanuel Macron as a special partner to attend the G7 Summit. This is the first meeting between the Indian and British leaders against the backdrop of the Modi government revoking the special status to Jammu and Kashmir and bifurcating the state into Union Territories. Pakistani and Khalistani supporters protested outside the Indian High Commission in London on August 15, injuring Indians celebrating Independence Day and leading to police intervention. Boris Johnson had expressed regret for the incident.

During a telephone call early this week, Johnson told Modi that Kashmir remains a bilateral matter between India and Pakistan as far as the UK's view is concerned.