Indian culture is replete with mythological stories that are not just entertaining but also a goldmine of life lessons.

Leadership and management are often important cornerstones of many Indian mythological tales and can be of significant inspiration for leaders today. This core concept formed the basis for a panel discussion titled 'How can Indian Culture inspire Good Leaders?' as part of the Indian Heritage Centre’s CultureFest 2020.

“I was a part of last year’s CultureFest, where I organised 2 panel discussions on the Tamil language. It was a great success. This year, since the theme was Ramayana, I had suggested that we discuss leadership skills and our Indian culture. The wonderful team at IHC welcomed the idea”, said Kalpana. 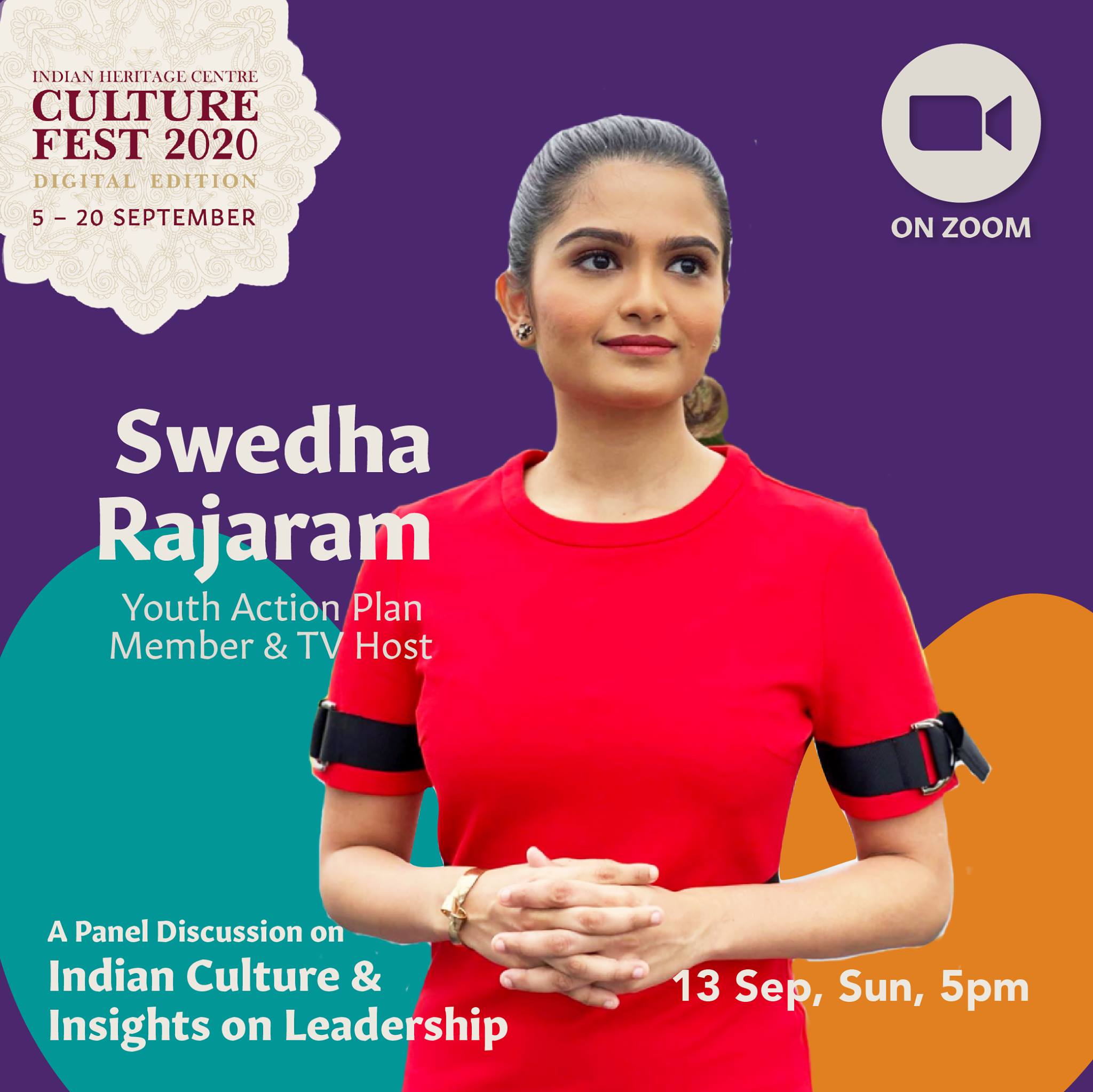 Five young and inspiring leaders in Singapore were hand-picked for their take on leadership goals, challenges, future aspirations, as well as some of their notable experiences through a ZOOM panel discussion.

“Youths are the most valuable asset of a country to take over lea­dership and development for the future of the nation. We felt it would be best to hear their valuable inputs on this subject matter”, explained Kalpana. 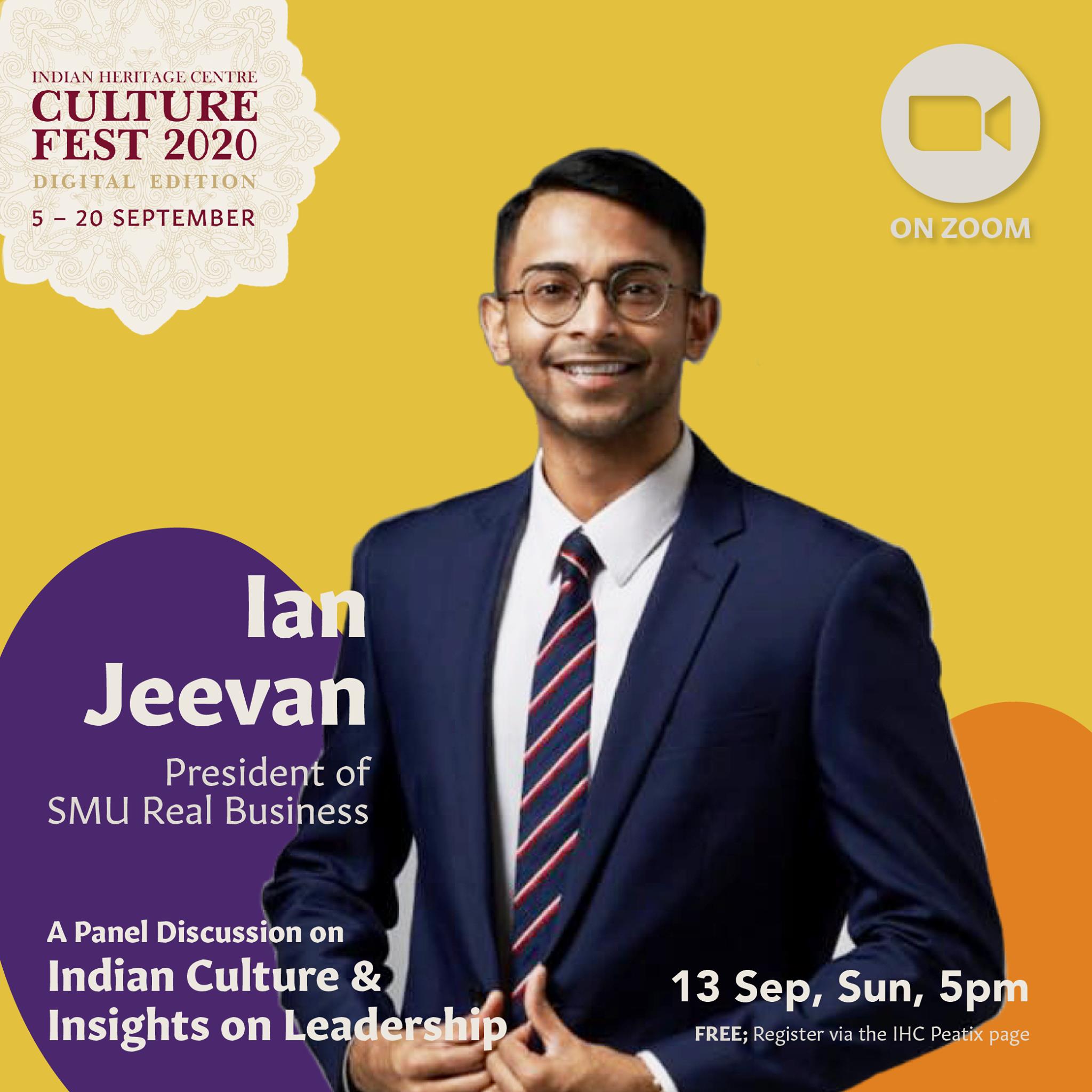 Ian Jeevan Arumugam - is the President of SMU Real Business Club that aims to support and equip budding entrepreneurs. With his own creative videos, Jeevan is an upcoming and growing social media influencer as well. Photo Courtesy: IHC

The panel was moderated by Sharul Channa - the only full-time female stand-up comedian in Singapore. She has proved to be a leader in her own field of work, crafting her unique stand in a largely male-dominated environment. 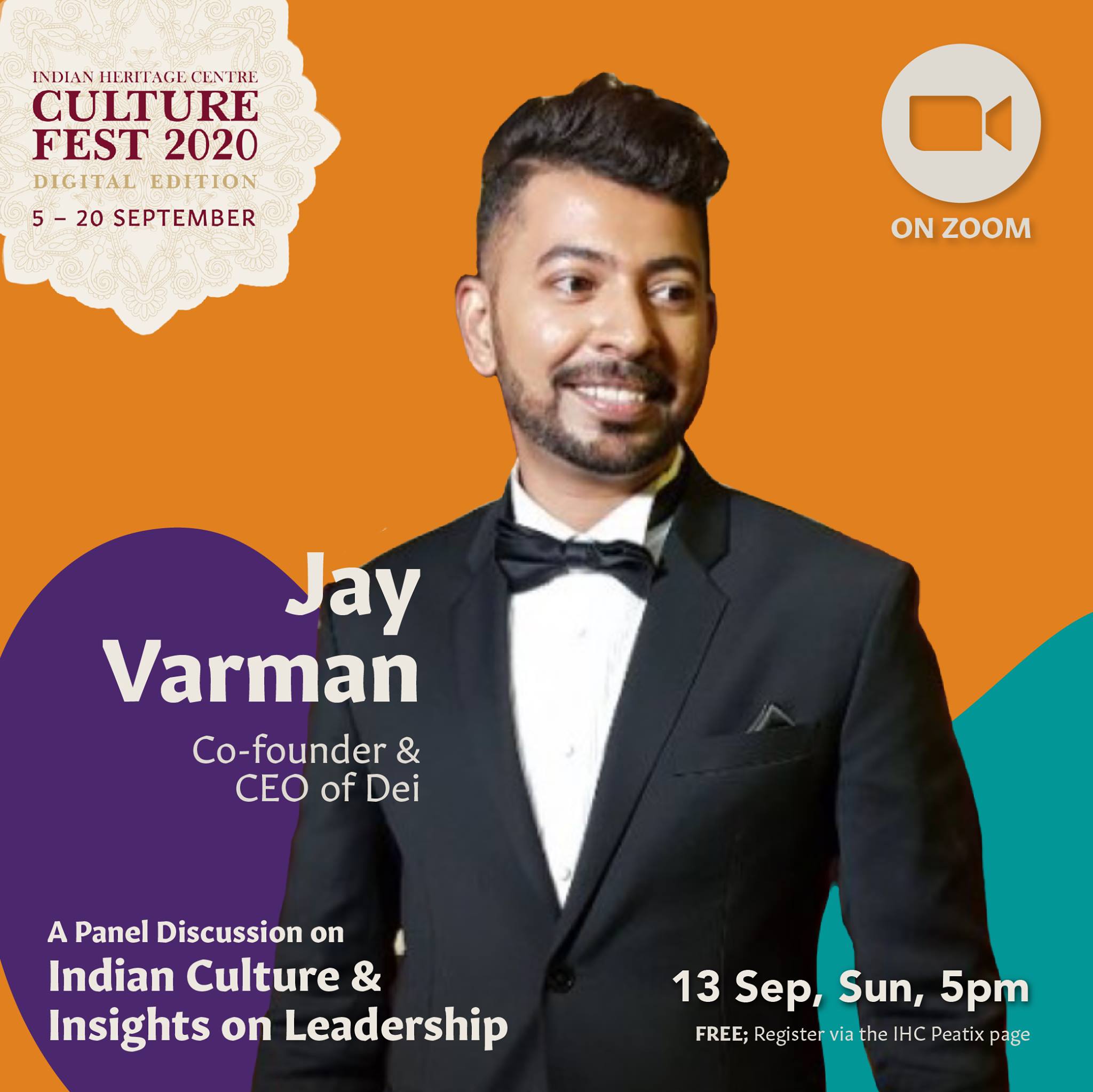 Jayavarman Gnanasekaran - is the CEO of Dei Holdings which he founded and recipient of Young Entrepreneur Award 2019 at the SICCI Awards. Photo Courtesy: IHC

“As you can see, all of them come from very diverse backgrounds and various walks of life,” said Kalpana.

“Though some of them have been a part of other panel discussions, this is the very first time that they are participating in IHC’s Panel Discussion,” she added. 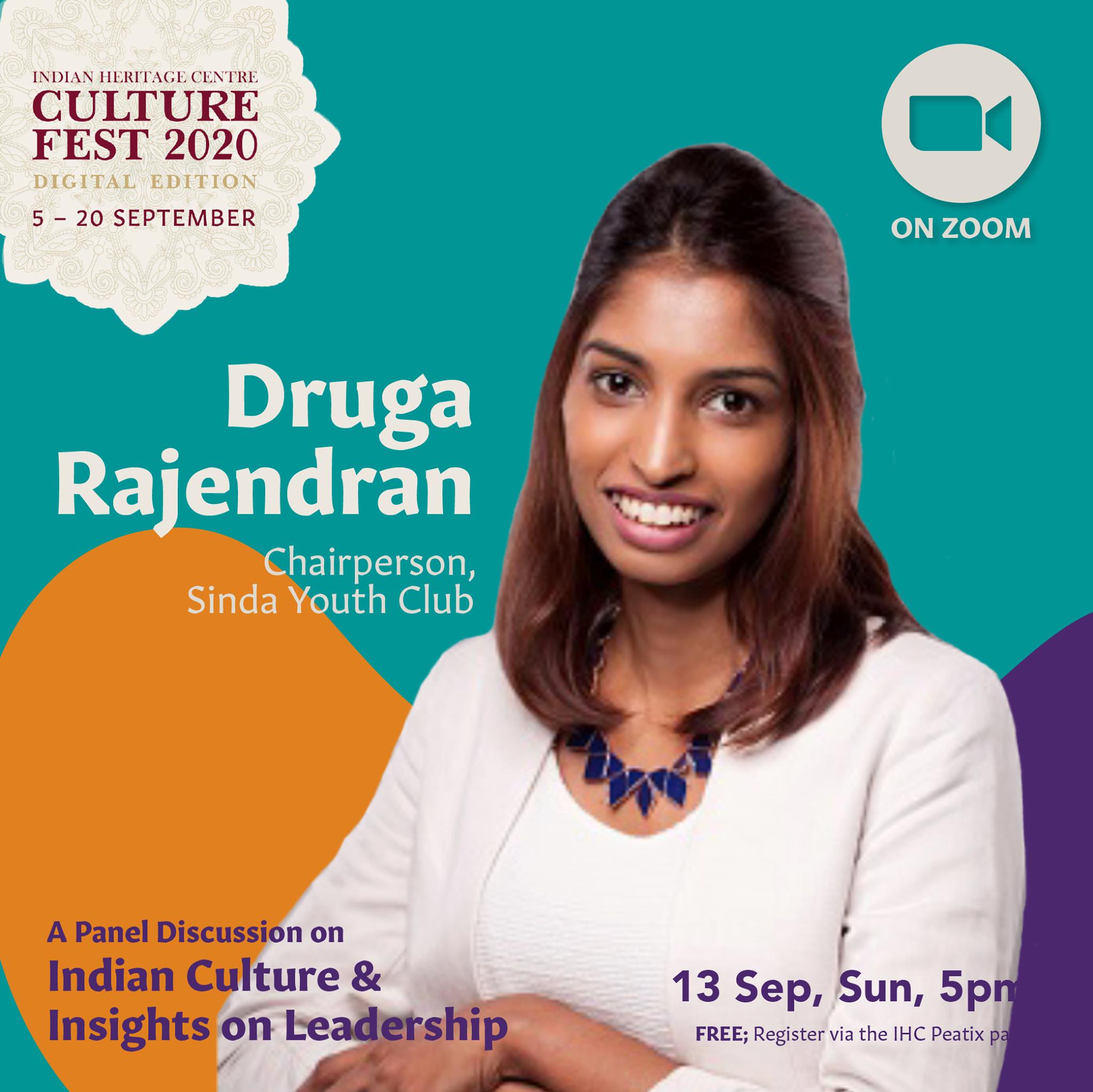 The discussion took place on September 13 via a zoom session which only admitted registered audience. Viewers were encouraged to ask questions during the session, resulting in a highly interactive, engaging, honest and robust discussion. 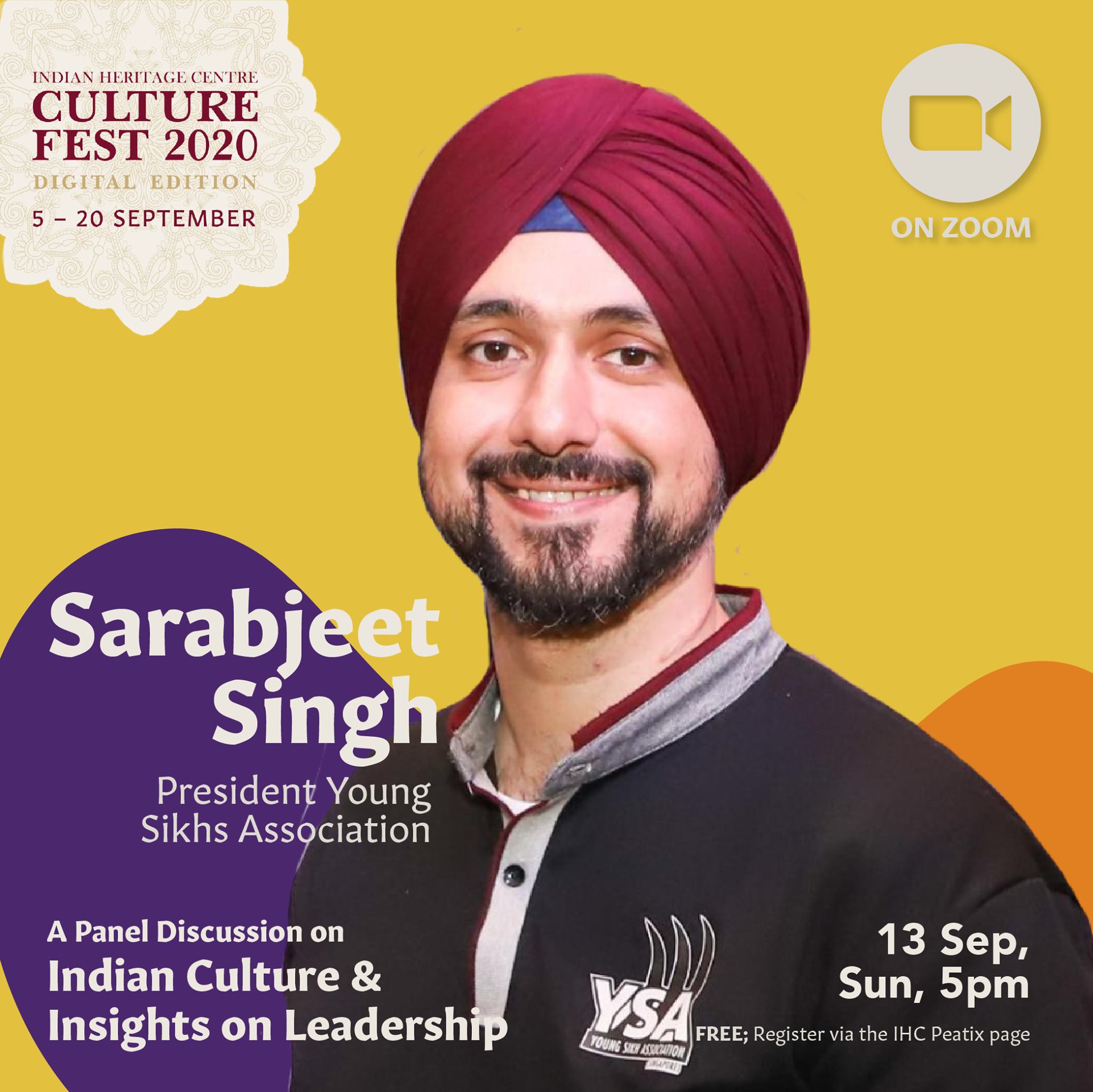 Sarabjeet Singh is the President of the Young Sikh Association (Singapore) and has organised Ministerial Dialogues and Lecture Series. Photo Courtesy: IHC

“Being an Indian and an entrepreneur, I believed I could share my experiences based on both these key components”, he added.

Like the other panelists, Jayavarman felt that, “no matter how society has evolved, everyone plays a very important role within the fabric of society.”

“We should never neglect our culture and I believe that this discussion led by youth will explore its relevance in today's context and leadership plays a key role in that,” he stated. 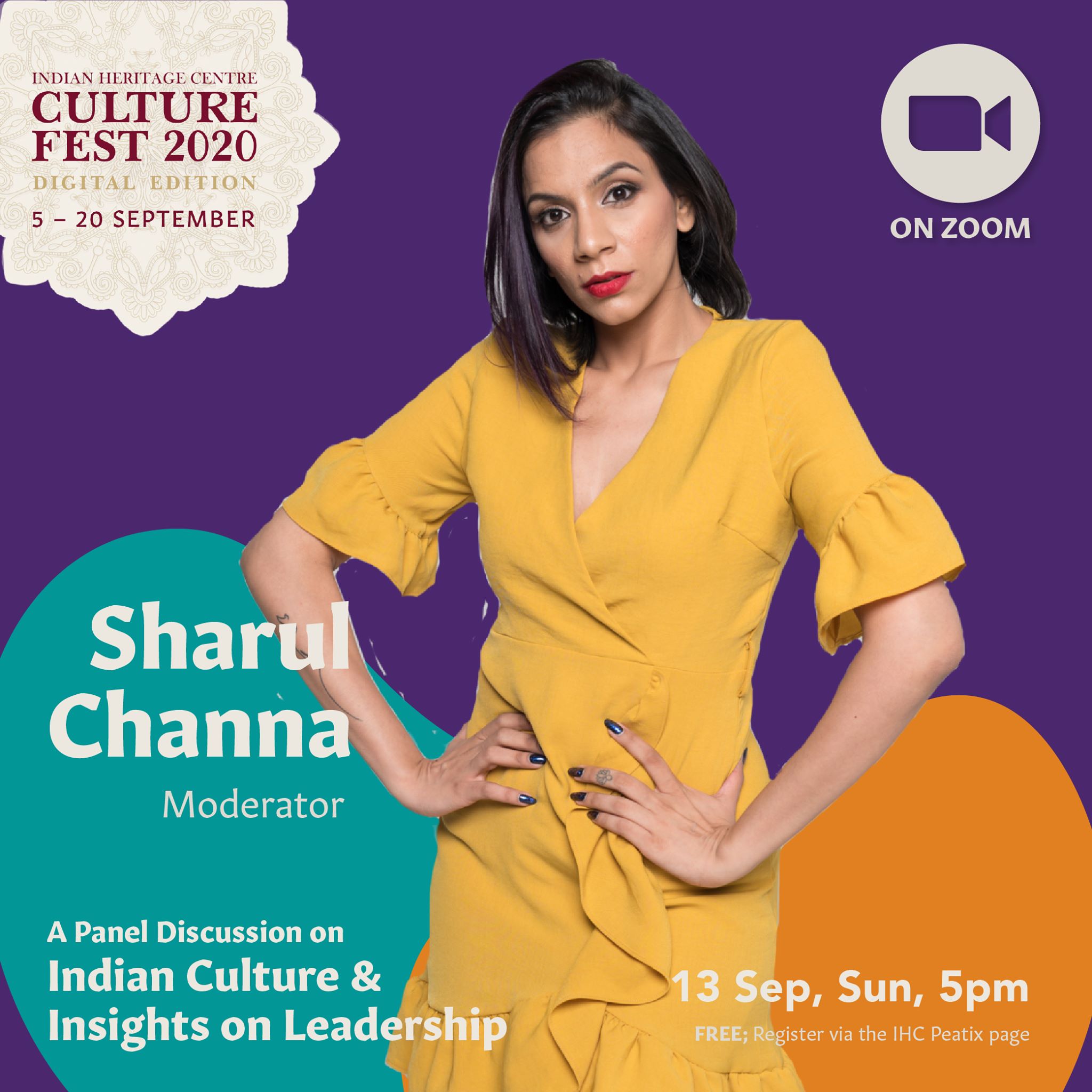 Moderator Sharul Channa the only full-time female stand-up comedian in Singapore who has proved to be a leader in her own work field. Photo Courtesy: IHC

With increased and easy availability of information, many types of leaders are under the spotlight. But what kind of leaders will help to evolve and bring Indian culture forward was a key question posed during the panel.

“Being the head of Dei, I have learned a lot about what it takes to be an effective leader. I have made many mistakes and these lessons have made me evolve to better myself and to bring the best out of my colleagues,” said Jayavarman.

These, as well as other personal experiences and stories shared by the youthful panelists with their fellow leaders, aided them in giving and gaining valuable inputs at the Indian Heritage Centre’s CultureFest 2020 Panel Discussion.