In a bid to attract investments to the state, Uttar Pradesh Chief Minister Yogi Adityanath met the delegation of India Foundation and Institute of Political and International Studies, Iran, as per an official statement. 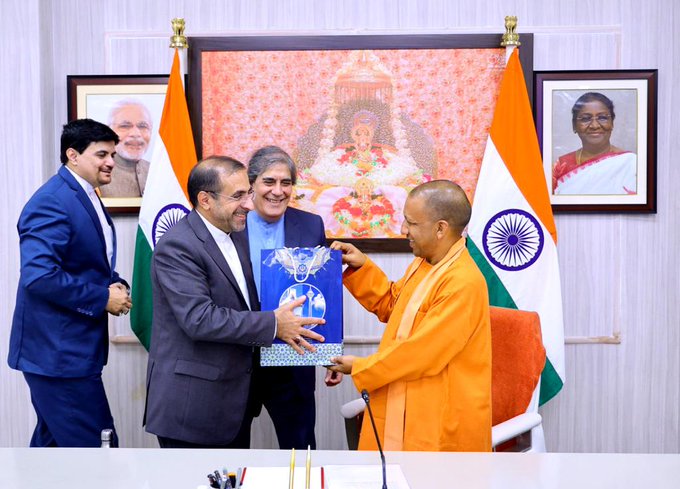 He stated that Uttar Pradesh is working as the growth engine of India's economy in line with Prime Minister Narendra Modi's vision.

"We are the top producer of food grains even though we are not the largest state land-wise. Uttar Pradesh contributes more than 20 per cent of the country's total food grain production", said UP CM.

The Chief Minister said that the state has the best water and agricultural resources. Uttar Pradesh is number one in the production of fruits, vegetables and milk along with all other food resources including wheat, and sugar.

"Meanwhile, under Prime Minister Modi's direction, much progress has been made in the infrastructure in Uttar Pradesh. Our connectivity is good. Today every part of the state is connected by rail, good highways and air connectivity", CM Yogi remarked.

Maintaining that with planned efforts in the last five years, UP has emerged as the best destination for industrial investment in the country, the CM added, "Cement, vegetable oil, textiles, cotton yarn, sugar, jute, carpets, brassware, glassware, bangles, and leather goods are among of the state's key businesses."

"The traditional industries including handicrafts, carpet manufacturing, metal artefacts, perfumes and leather goods form a major part of exports from India. Connectivity in the state has also become very strong. Today 6 expressways are operational, besides, 7 new expressways are going to be ready soon," added CM Yogi.

As per the CM, a number of PPP-based projects in the areas of power, metro rail, transportation, education, health, and urban renewal are in various stages of development and will result in more business prospects in the future.

CM Yogi said that Uttar Pradesh had received 93 investment proposals worth more than ₹ 11,250 crore for the flagship Defence Corridor project. Under the UP Defense Corridor, the BrahMos missile project in Lucknow is being fast-tracked, which will develop the next-generation supersonic missile for the Indian forces.

"India's drone sector is projected to clock a turnover of ₹ 12,000-15,000 crore by 2026. The government has announced plans to establish a Centre of Excellence dedicated to drones at the Indian Institute of Technology (IIT), Kanpur, to foster research and facilitate setting up of drone units in the state," he said.

Iran's ambassador to India, Dr Iraj Elahi, said during the meeting that Iranian and Indian customs and cultures are very similar. "India feels like our home," he said.

He invited CM Yogi to visit Iran and said that if he did he would feel like being in India. The Iranian Ambassador praised the way Prime Minister Narendra Modi has led India in pursuing its independent and pragmatic foreign policy.

He invited CM Yogi to visit Iran and claimed that if he did, he would feel like India. The Iranian Ambassador praised the way Prime Minister Narendra Modi has led India in pursuing its independent and pragmatic foreign policy.

Stating that India has become a major global power in recent years, Dr Elahi said, "Uttar Pradesh's significant contribution to India's economy is a hint that the country's economy will soon expand more quickly. The pace of infrastructural work as well as enhanced connectivity in the state is an indicator of the major transformation that has taken place. Iran is keen to invest big in Uttar Pradesh."