With drones, fireworks and cheerleaders, gear up for a festive SCC T20 tournament

The 5th International SCC T20 tournament kicked off today with a press conference introducing the captains of the eight participating teams and a Q&A session with the captains and marquee players Muttiah Muralitharan and Ferveez Maharoof.

President of the Singapore Cricket Club Sher Baljit Singh welcomed the players and audience to one of their signature events, introducing the history of the club. “The cricket section and the organising committee to ensure we will have a great event. We will have a lot of fireworks and entertainment over the weekend.”

Pushpendra Sharma, Chairman of the SCC T20 tournament, lauded the organising team for their work over the past nine months. He also thanked the sponsors for making the event possible. Sponsors for the event include Dimension Data, Global Citizens Forum, SCM, UFL, Ashok Mahatani, Harish Dongre and Dharmichand, Myra’s and Petersons.

“Our sponsors are coming back once again,” he said. “And that’s a good thing because it shows us we’re doing things right.” He also thanked Connected to India and other people affiliated with organising the event. 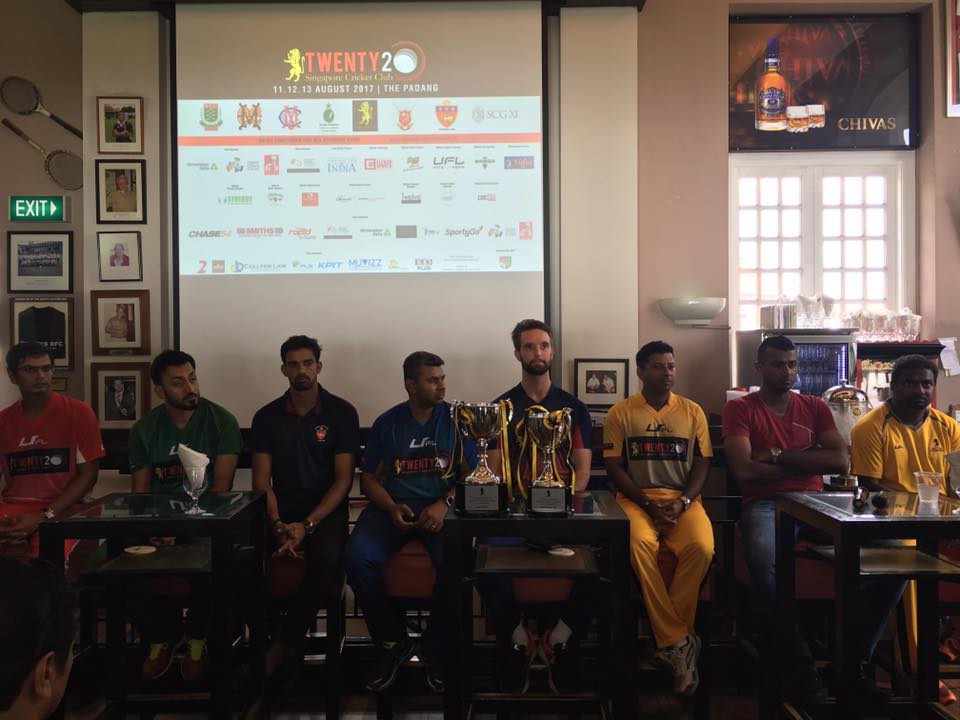 The SCC T20 officially got underway with the Press Conference being held at Stumps, SCC. Photo courtesy: SCC.

Legendary Sri Lankan bowler Muttiah Muralitharan, who holds the world record for the most wickets in Tests (800) and one-day internationals (534), will turn out for the hosts SCC, along with former Australia opening batsman Ed Cowan, 35, and Sri Lanka all-rounder Farveez Maharoof, 32.

Maharoof spoke about his hattrick against India and experience in the IPL. “Playing with Glenn McGrath was one of the best things to happen to my career.”

Riaz Hussein, captain of the SCC, made the audience chuckle with his reply when asked how the SCC were going to win the tournament. “Both of them are sitting right here,” he said pointing to Murali and Maharoof, adding that, “we’re going to do our best and hopefully we’ll still be in the tournament on Sunday.”

Sachithra Senanayaka, the captain of two-time winners Sinhalese Sports Club, said the tournament had become more competitive each time and they would be facing stiff opposition. He also seemed excited about playing against Murali.

“Muttiah Muralitharan is one of my real-life heroes. I’ve played with them and now I have to play against them, which I’m looking forward to.”

The event wrapped up with Andrew Beer, the moderator, listing some of the side events during the weekend. Entry to the matches is free. For the first time, cheerleaders will be present on the grounds, as well as a spinning DJ.

The tournament will also use modern devices such as drones, Go Pro cameras and luminous bails. Fans will get prizes for taking catches beyond the boundary rope, as part of a series of promotional events around the tournament, which has been recognised by the ICC and the Singapore Cricket Association. 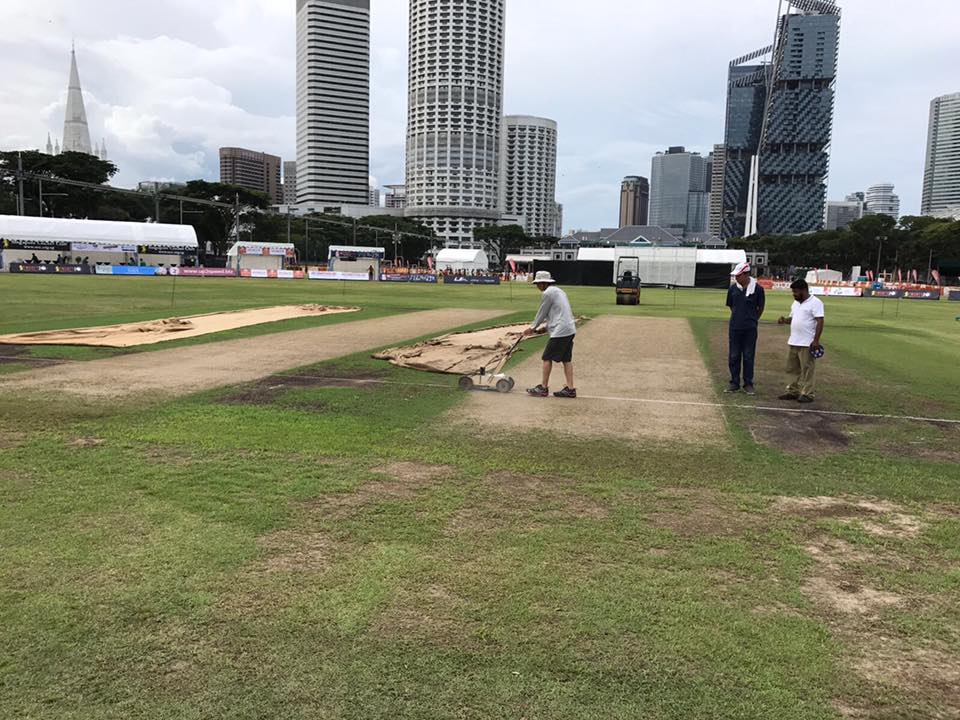 SCC Groundsman Rashid and team in action at the centre wicket. The stands are also getting set up for the exciting weekend of cricket extravaganza. Photo courtesy: SCC
Singapore Cricket Club