“Whose grandfather is this?”: Dr Anitha Devi Pillai

Sometimes you find pieces of yourself in unexpected places.

In the course of the research for her book From Kerala to Singapore: Voices from the Singapore Malayalee Community, Dr Anitha Devi Pillai came across a photograph of her paternal grandfather in a private Facebook group for former residents of the old Sembawang Naval Base. It was aptly captioned, “Whose grandfather is this?” 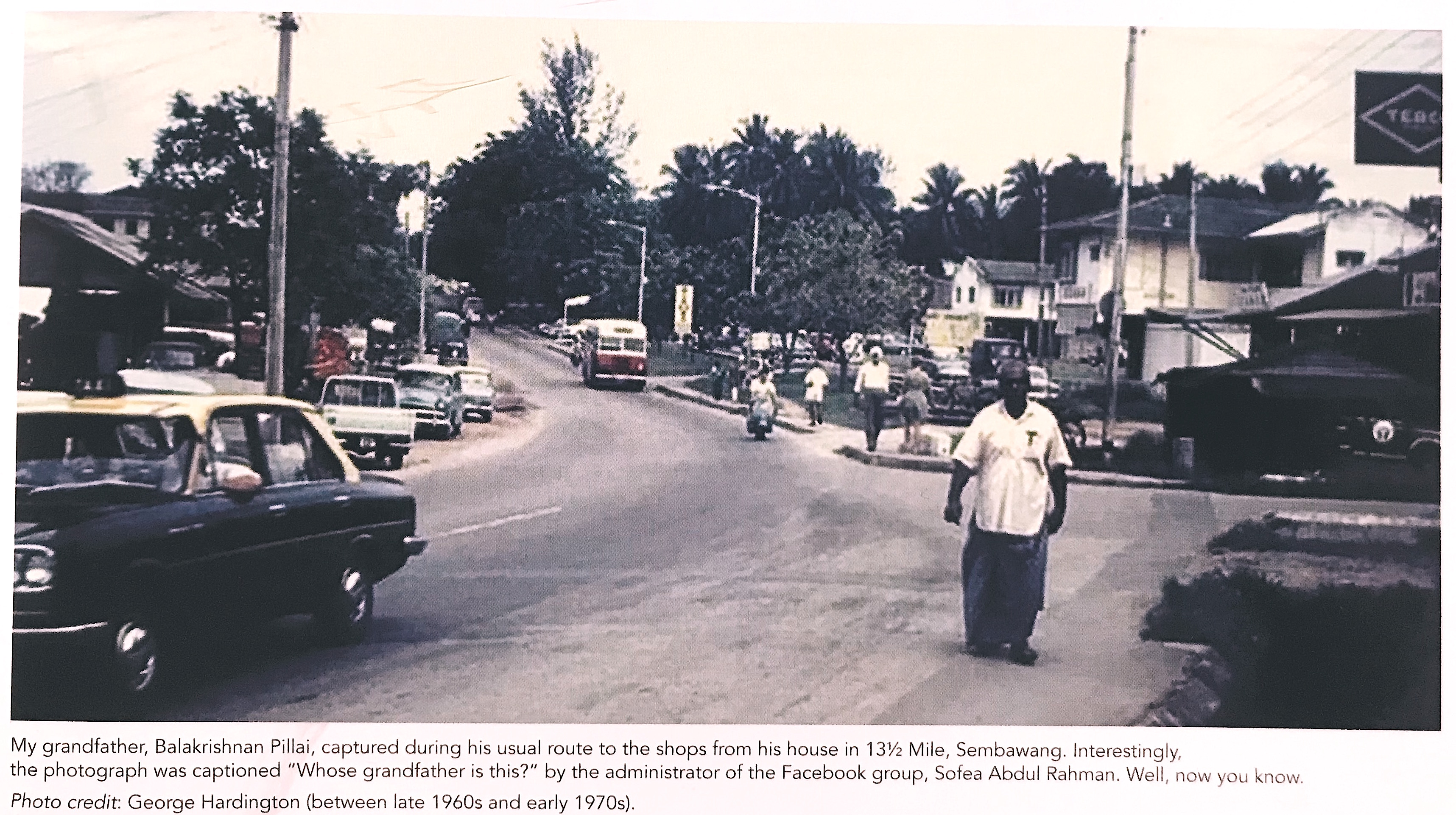 Photo: From the book 'From Kerala to Singapore: Voices from the Singapore-Malayalee community' by Dr Anitha Devi Pillai

From Kerala to Singapore traces the lives of Malayalees in Singapore through more than a hundred personal narratives. “Malayalees were very small in numbers, and we were a minority within a minority – in fact, we still are. But certainly, we made our mark,” shared Anitha.

In fact, when Singapore issued its first definitive series of stamps after independence, the designs chosen as representations of Singapore’s Indian culture included a masks from a Kerala dance form: Kathakali, and Santha Bhaskar as a Bharatanatyam dancer, a Malayalee anda Cultural Medallion recipient.

Professor Rajesh Rai describes the Malayalee influence as being “ disproportionate to their numbers, precisely because of their prominence and their involvement in the community life of Indians in Singapore” in the book. Yet, there was very little documentation of the migration and evolution of this community, whose history is intricately intertwined with that of Singapore’s.

“My hope is that this book will go towards some way in filling this gap and helping readers to appreciate how the Singapore-Malayalee community has maintained aspects of the cultural heritage even as they integrate into the larger Singapore social fabric,” Anitha said. 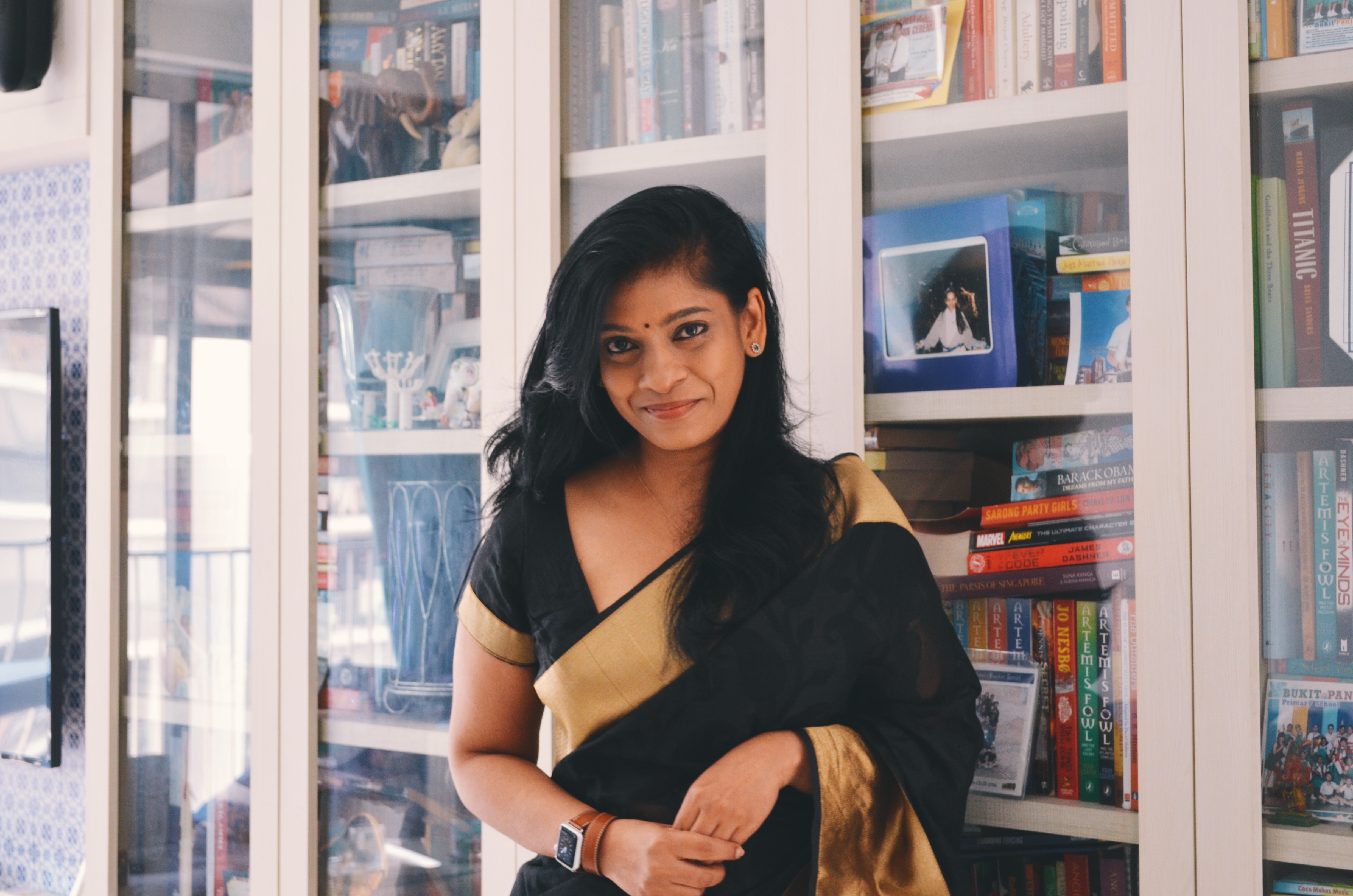 The pieces to be found

On a personal level, it is a project that is very close to her heart. “I have always been interested in understanding my community and identity as a fourth generation Malayalee in Singapore. Before the internet became widely available, I often had to explain Malayalee festivals and practices to my peers. Even amongst my Indian classmates, there was very little understanding or awareness about Malayalees.”

Under the guidance of Professor Lionel Wee at National University of Singapore in 2002, she embarked on her Master thesis on the Malayalee community. “But the thesis was just 20,000 words long and it had to be completed within a year. So all too soon after I started on my research, I had to stop.” But Anitha was determined to complete what she had started. “And I did – with the help of a lot of people and the community. My former supervisor came for the book launch and when I finally handed the book to him, I felt like I had finally completed what I had set out to do years ago under his guidance.”

Growing up, Anitha acquired Malayalam and English at home, and learned Tamil as a second language in school. “My mum would only converse to us in Malayalam while my dad would switch between the two languages depending on the context of the conversation.” While she has never attended any formal Malayalam classes, she could speak it with ease, having grown up watching a lot of Malayalam dramas on stage, she developed fluency in the language.

Access to Malayalam movies and songs was limited in the early years. However the Malayalee community in Singapore did a great job of organising get-togethers and putting up shows such as Onam Night, Sports Day and drama competitions. “My family and I attended all of it as much as possible – these occasions allowed us to speak and mingle with other Malayalees in Singapore outside of our family circle.”

The book was titled ‘Voices from the Singapore Malayalee Community’ – with ‘voices’ indicating that Malayalam dramas were an important aspect of the lives of the interviewees over the years. “I remember watching a few plays during one of the family outings, that touched on issues pertaining to Kerala. I must have been really young then. In fact, it was the interviewees who jolted my memory of these plays,” Anitha recalled. “The most memorable plays that I have attended were the ones that touched on social issues in Singapore – written by Singapore Malayalees and sometimes incorporating Singlish expressions into them.” 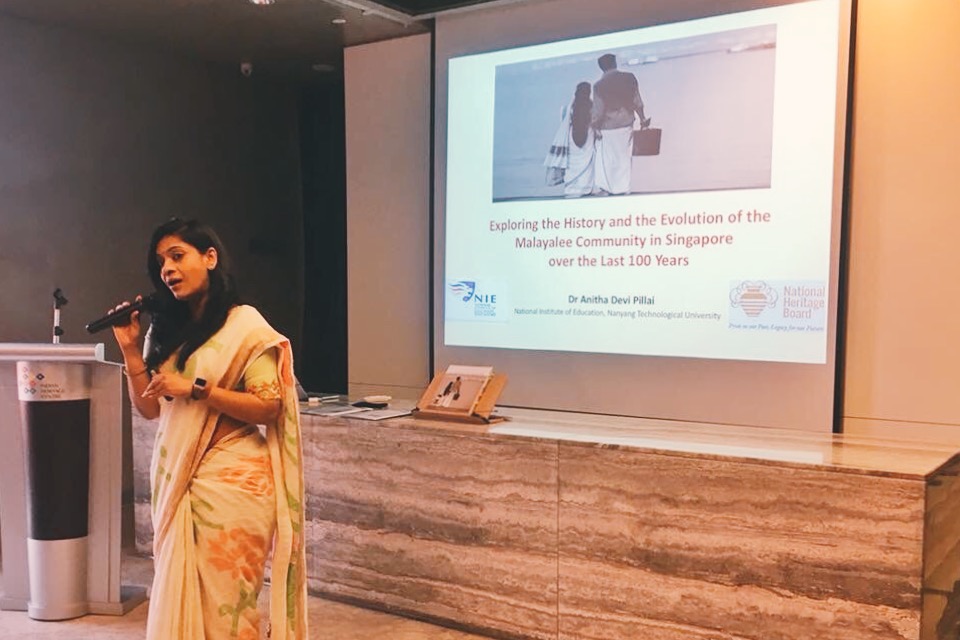 The stories lost and found

While the Malayalees are the second largest sub-group in Singapore's Indian community, they are a small tight-knit group. “Most families know each other, and so I was quite surprised when a few people called me up after reading the book, saying that there were some things I had written that they weren’t aware of,” said Anitha. For example, during the elections in the early days, the authorities were actually looking for election officers who spoke in Malayalam – which wasn’t one of the four official languages of Singapore. She also discovered a strike notice from the 1950s written in Chinese, Malay, as well as Malayalam. “These are the little nuggets of information people never knew and they appreciated that the book allowed them to learn more about their own heritage.”

Speaking about the most memorable part of the journey, Anitha recounted the touching moment they finally held the book in their hands.

“After the launch, one of the aunties from my community came over to me and rested her hand lightly on my head as a blessing. That meant a lot to me as it was my dream project. But in that moment, I also realized something else. The book meant a lot to other members of the community as well,” she concluded.

From Kerala to Singapore: Voices from the Singapore Malayalee Community, can be bought from: