Over the weekend I attended the premier at Carnival Cinemas at Shaw Theatre, Singapore. Not of one but of two movies in quick succession.  It was not a marathon six hour movie session. All winded up in just under 60 minutes!

For the first ever time in Singapore two short films were showcased on the huge 70mm screen at Carnival Cinemas to what seemed like a full house!

I’ll start with the 2nd movie to be screened, as I followed the LIFO (Last In First Out) method and the last scene was the first to be jotted in my notebook. 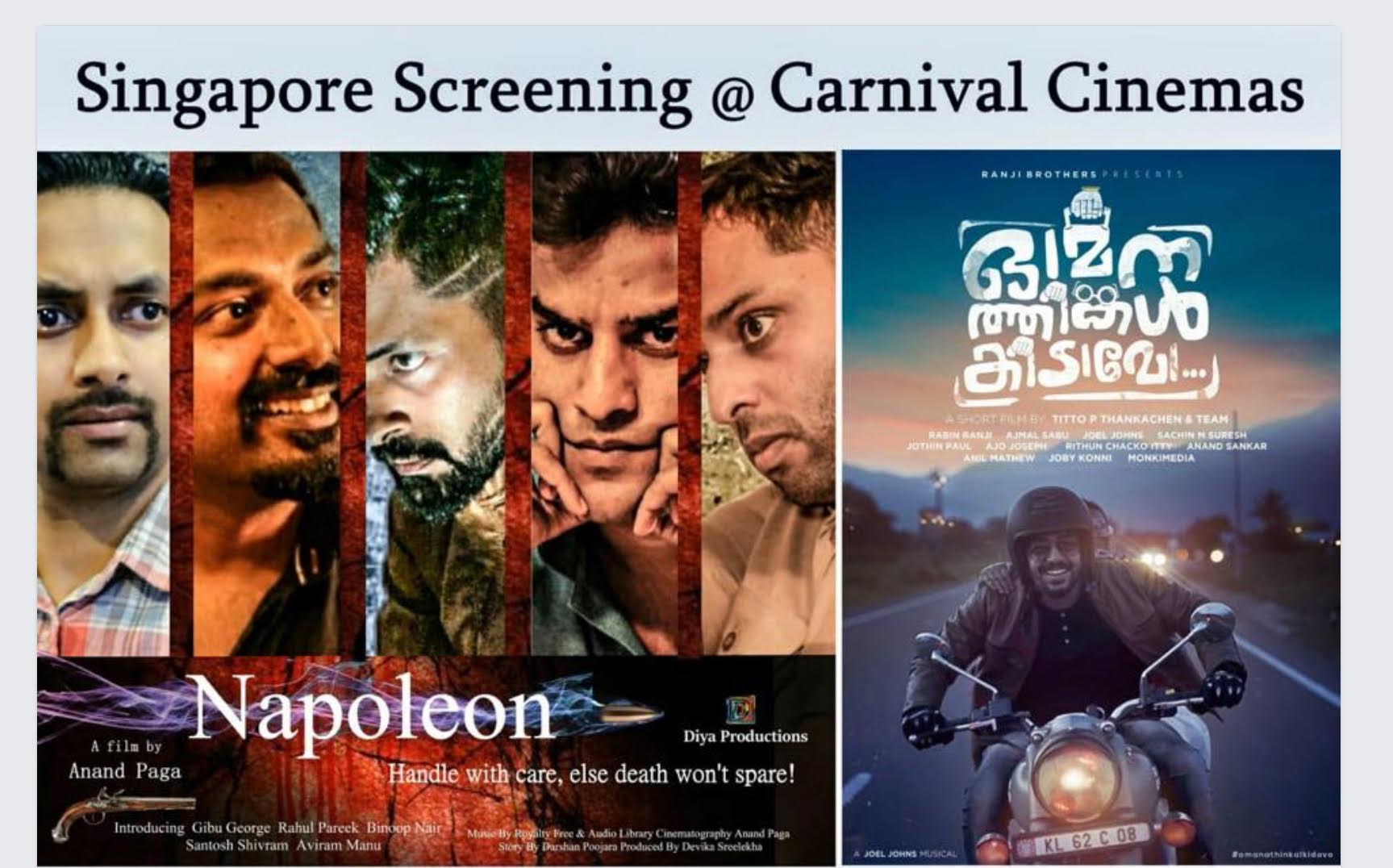 The impressive line up of credits is convincing enough for us to believe when Rabin says, “Omana Thinkal Kidavo (OTK) although a short film has been treated as a full length feature film right from its making till post production”. He adds that, "Its four song tracks are already playing over FM radio and Surya TV will telecast it in November. They have seen the final product and heard the audio and highly appreciated its quality. Definitely it  will set a benchmark for all genres of short films," he adds with quiet pride.

Rabin is a working professional with a passion for movie making. With OTK being shot on location in Kerala he says it’s a blessing of being in Singapore, so he could fly over almost every weekend. For his extremely supportive wife and him it must have been like having twins, as this movie was as much their baby as the baby boy they had just about a dozen days before OTK’s premier on 9th September! Rabin shared all this and more over a chat with Connected to India (CTOI). 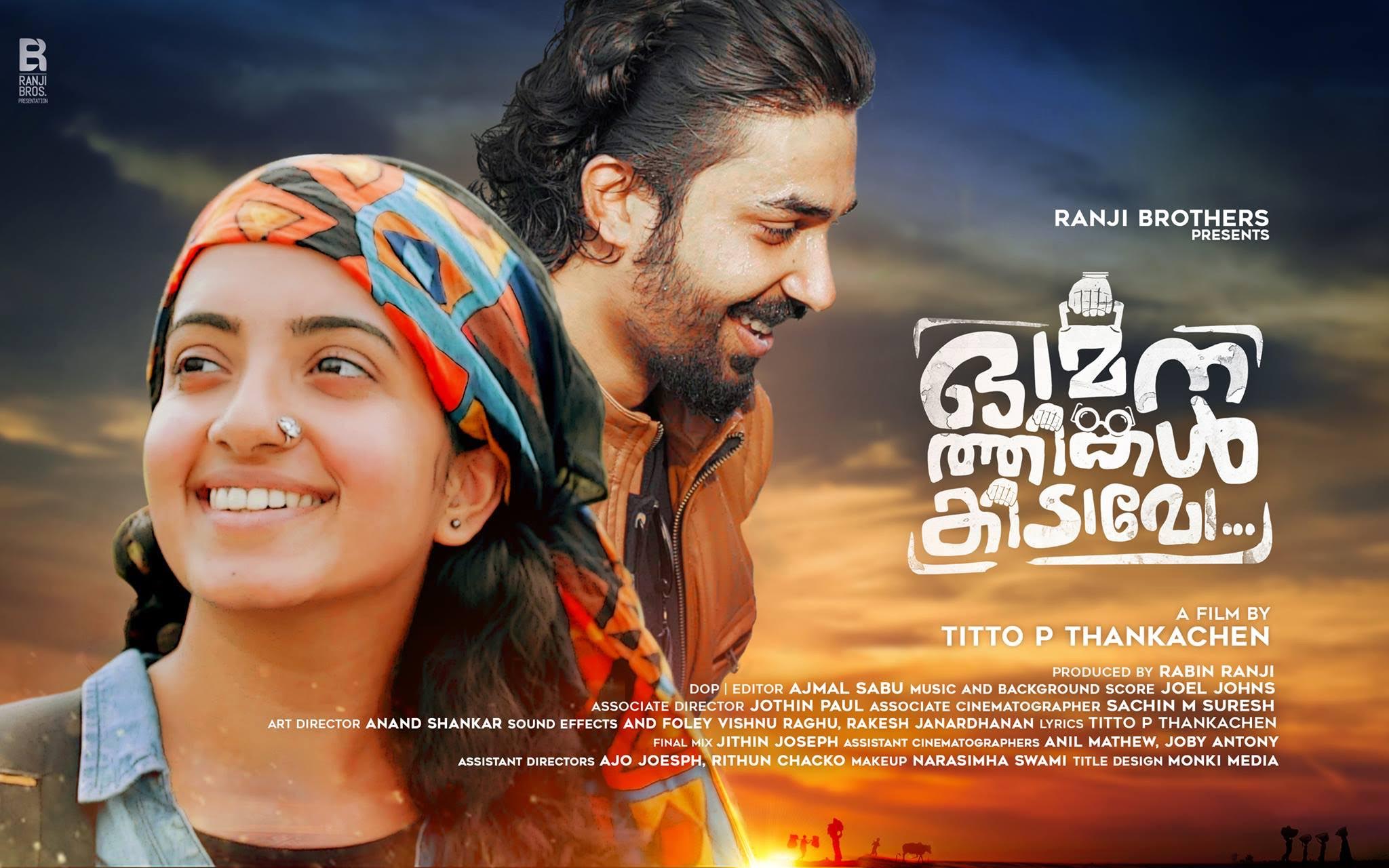 CToI : How did the idea of OTK come about?

Rabin: It is based on actual conversation thread, when the director spoke to some one from an old age home. The director then saw a story in it and started scripting.

CToI: What were the challenges you faced?

Rabin: The shooting was at an actual old age home in Chenganassery, Kerala. Getting permission to shoot there was difficult. When convinced that it is to convey a socially relevant image, the sisters of the mission there agreed. However the inmates need to give their permission, the sisters stated.

The residents of the old age home then said that they would give their blessings on one condition. The condition was that the crew had to spend some time and talk to them.

I was really moved by this and had to take a moment to myself before I continued the conversation. All these residents of the old age home wanted –  I really hate the term ‘inmates’ which most people seem to use, but yes, it is a form of incarceration isn’t it? – was someone to have a few minutes of conversation with!

Rabin told me that this was both a challenge and a blessing in disguise as the skeletons of the older characters in the script, could be then thrashed out into real flesh and bone people with emotions,  based on the directors interaction with them. Reel became a lot more real! Possessiveness, affections, liking, deep bonds were soon found out to be a common thread. Instances such as when one of the old folks doesn’t eat without the other or wont celebrate an occasion without the other were highlighted among these extremely caring and loving people. This reflects in the movie where one of the old folks who is aiding and abetting the old mother to jump over walls and run away from the home, asks her to come back before Christmas so he can celebrate with her.

Cinematography and music were absolute highlights for me as well as for many, based on the feedback I received. DOP and Editor  Ajmal Sabu and Music and Background scorer Joel Johns, take a bow! The many shots such as the three puppies (so adorable that i wanted to take them home) , the vibrant young classical dancers (shot at an actual dance school nearby), the amazing scenic landscapes (shot with drones at Thenkashi over the Kerala-Tamil Nadu border) are some I loved.

Prior to this the Ranji brothers had produced ‘Kalki’ which won a state award for short film. It will be showcased at the Singapore South Asian International Film Fetival (SSAIFF) 2018. Kalki also deals with a socially relevant and very somber case. It portrays the emotions of a rape case victims father one day before the court gave its verdict. You can catch Kalki at SSAIFF, the schedules of the shows will be available here : http://www.sgsaiff.com

You can catch OTK here :

Omana Thinkal Kidavo, this short film is a journey of Motherhood, Memories, Emotions and much more, it says in its tagline. The audience could relate to the journey of a mother whose love for her child paved the way. The theatre was cold Brrrr… but the warmth of the movie kept us glued to the seat right till the closing scenes when we spontaneously burst into applause.

The credits speak for themselves don’t they, as they depict that this  ‘Napoleon’ too was run by an army, a one man army called Anand Paga - who has handled the script, camera, sound, editing, pre and post production and everything in between. Rahul, Binoop, Santosh, Manu and Gibu form his cast who fueled by their passion, burnt their weekends and evenings in an effort to bring their dream to fruition.

A haunted gun, is the daring premise on which the movie, Napoleon is based. It brought together 5 people who are full time IT professionals by day and aspiring actors in their free time. The inspiration for this story came from a meet-up with a family friend who recounted a story about Napoleon’s pistol which was said to be possessed by a spirit.

Putting a movie out there for everyone to see is a big step. Add to it that it is a 70mm big screen and this is your first movie. It must have been as nerve wrecking as holding a pistol, sans bullet but with a evil resident spirit,  in your hand for the cast. However the director and his team of gung-ho actors were cool as cucumbers and handled the pressure well.

The movie’s plot is very interesting and based on a historical premise. Napoleon Bonaparte’s pistol is the heroine, as one of the actors remarked when asked why there were no heroines in the movie. The movie revolves around this revolver which is reputed to have a resident evil spirit that kills people even though the bullets for this pistol are no longer available. Napoleon ran out of ammunition for this custom-made pistol before the end of his last war says the captions at the end of the movie.

Historically there is a Flintlock belonging to Napoleon that was said to have some unique characteristics and properties. Loosely based on that, with some thriller and mystery elements added in, it did keep the audience hooked till the twist in the tail was revealed at the end of the tale.

Anand Paga and Darshan Pujara came up with the initial idea and the story. Recorded with a DSLR camera and with not much experience in technical aspects and post production, the editing itself was done more than a dozen times, they said. Some of the audio was even recorded on phones and shared over WhatsApp messages, stated the motley crew. So a few rough edges can be expected but when the heart is in the right place these can be overlooked.

“We accept the technical flaws but with just the very minimal resources we pushed the limits for getting the best possible output and that is our achievement”, says the visibly proud Gibu George, who plays a key character in the film. The focus was on just the script, acting and editing. “That is what we all had to offer and no fancy things were done, which is usual for any short films these days. We were so confident about the script, story build up and the performances”, states Gibu. A humble effort to bring the small films into big screen so as to provide the right ambience for a complete viewing experience, Napoleon is a collaborative effort with input from almost the whole cast during the production of the movie.

Anand Paga shared some of his experiences over a chat with Connected to India.

CToI: What were the challenges you faced?

Anand - Meeting self -expectations and handling the technical aspects. Art direction, light and many other aspects were self-taught through you tube tutorials.  We still managed to pull it through. Post production was however the biggest challenge. 4 months was the time taken in the post production itself.

CToI: What was your budget? Can we call it a Low Budget film?

Anand: (Laughs) It was not a Low-Budget but a No-Budget movie! Shot at home mostly with all expenses borne by the cast and crew, except for a few Biryani meals sponsored by the director.

CToI: You mentioned that we can expect more in the future. What are your future plans?

Anand: We have 4 projects in the pipeline. You can expect a more professional short film - in Malayalam - in the future may be as soon as in 6 months.

CToI: Was this your first ever attempt at film making?

Anand: No. I have made a movie earlier.  A short film called Bhani. Its name is inspired and made up of the first two syllables from ‘Bharatiya Nilayam’. It got a good response and inspired me to do this one.

Bhani, this horror-thriller was Anand Paga‘s earlier film. He is planning to release Napolen on YouTube by 15th September.

Almost 200 people attended making it a houseful show. A mix of audience who may or may not have been bilingual. As Napoleon was multilingual with dialogues in English, Hindi, tamil and Malayalam, English subtitles were added in. OTK was in Malayalam with English subtitles as well.