A fund raising campaign set up to support the family of Srinivas Kuchibhotla, Engineer from Hyderabad and the victim of the Kansas City hate crime has raised USD 505,090. Campaign was set up on the crowd funding site GoFundme by Kavipriya Muthuramalingam.

Post accompanying the campaign said, “We've set up this fund to help them with  the funeral expenses and other ongoing grief / recovery support costs. This includes the very expensive process of  carrying his mortal remains back to India, so his parents can say goodbye one last time to their beloved son. Any and all contributions are greatly appreciated.”

The campaign worked as donations from both Indian-Americans and the local American community started pouring in and went past the target amount set up at USD 150,000.

Most donations are in the range of USD 25 to 50 and highest amount goes up as much as USD 2,500. People have been moved by the incident. Dan Baker, Principal Engineer at Tektronix, Inc donated USD 1,000 and said, “I was sickened by this. So sorry.” 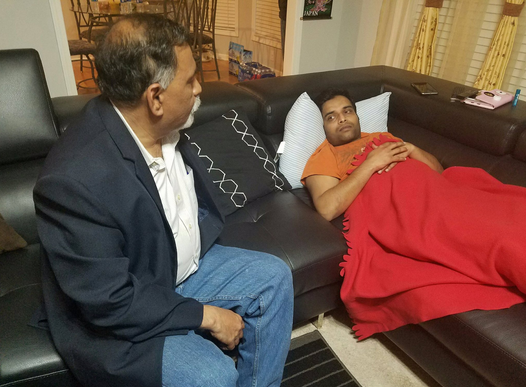 Alok Madasani, Srinivas’s colleague and a 24 year old American Ian Grillot were also injured in the incident. Both of them are recovering from their injuries.

Consul General of India in Houston Anupam Ray is supervising the current situation and providing all possible help for the grieving family and the community in Olathe area of Kansas. Sushma Swaraj, Minister of Enternal Affairs has also expressed her condolences.

I am shocked at the shooting incident in Kansas in which Srinivas Kuchibhotla has been killed. My heartfelt condolences to bereaved family.

“Immediately when the incident occurred, Consulate rushed Deputy Consul RD Joshi and Vice Consul H Singh to Kansas to be with the family of Srinivas at this trying moment,” Ray told PTI.

While Twitter friendly President Trump had tweeted about crimes in Chicago on the morning of February 24 there is no response from him nor his administraion in the Srinivas Kuchibhotla case. His wife has asked a question, "How safe are we?" Wonder if President Trump is interested in answering the question.

Seven people shot and killed yesterday in Chicago. What is going on there - totally out of control. Chicago needs help!