Ukraine President thanks Modi for support 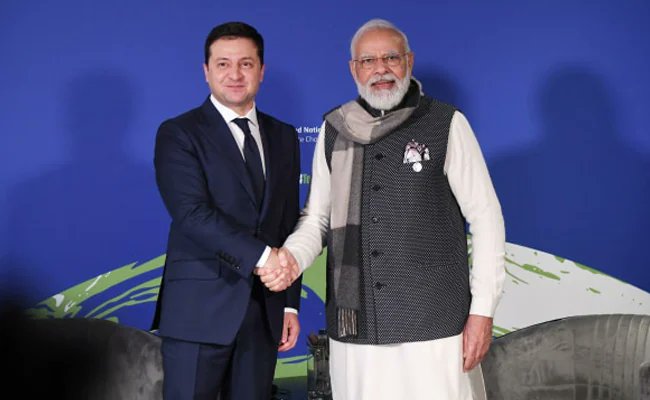 Taking note of the dialogue between both leaders in Uzbekistan, the Ukrainian president underlined the importance of PM Modi's message and extended his gratitude. Photo courtesy: Twitter

In a telephonic conversation with Zelenskyy, PM Modi reiterated his call for early cessation of hostilities and the need to pursue the path of dialogue and diplomacy.

"Prime Minister [Narendra Modi] reiterated his call for an early cessation of hostilities and the need to pursue the path of dialogue and diplomacy. He expressed his firm conviction that there can be no military solution to the conflict and conveyed India's readiness to contribute to any peace efforts," the Prime Minister's Office said in a statement

Thanking the prime minister for his support of Ukraine's 'integrity', Zelenskyy emphasised the importance of his recent statement wherein he deemed the period as wrong for any war.

Zelenskyy's office in a statement said he discussed with PM Modi the "holding of the so-called referenda by Russia in the temporarily occupied territories of our country".

"The President noted that all the aggressor's decisions aimed at attempting illegal annexation of Ukrainian territories are null and void and do not change reality," a Ukraine government statement said.

Earlier, during the Shanghai Cooperation Organisation (SCO) conclave in Samarkand, PM Modi spoke to Putin about the ongoing Russia-Ukraine conflict on the sidelines of the meeting.

"Today's era is not an era of war, and I have spoken to you on the phone about this," the Indian PM told Putin.

Taking note of the dialogue between both leaders in Uzbekistan, the Ukrainian president underlined the importance of PM Modi's message and extended his gratitude. Zelesnkyy renewed his invitation to the Indian leader and urged him to visit the eastern European country, reeling under hostilities and military offensives, at present.