Britain's international trade secretary Liz Truss is set to arrive in New Delhi for talks with Commerce and Industry minister Piyush Goyal tomorrow and to work out further details around a proposed Enhanced Trade Partnership between India and the UK, officials stated. 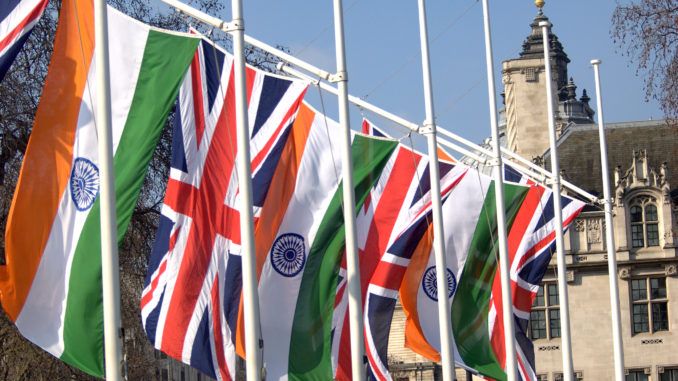 The visit by Truss this week is also seen as a precursor to a proposed visit by UK Prime Minister Boris Johnson ahead of the G-7 summit, scheduled for June 11-13 in Cornwall. Photo courtesy: MEA

The visit follows a virtual dialogue between the two ministers in November 2020 to review the progress on a closer post-Brexit bilateral tie-up, following Goyal's visit to England in 2019.

The visit by Truss this week is also seen as a precursor to a proposed visit by UK Prime Minister Boris Johnson ahead of the G-7 summit, scheduled for June 11-13 in Cornwall.

"The honourable ministers will be meeting in New Delhi as part of the ongoing engagement on reducing barriers to trade," Gaitri Issar Kumar, the Indian High Commissioner to the UK, said during a post-Budget virtual interaction session in London.

"The Budget sets a firm path of job creation and economic growth and is also great news for British collaborators and investors," she added.

The interactive session, organised by the Indian High Commission with the Indian Professionals Forum (IPF), Federation of Indian Chambers of Commerce and Industry (FICCI), Confederation of Indian Industry (CII) and Ernst & Young (EY), evaluated the most important aspects of the Union Budget from a foreign investor's perspective.

There was unanimity on the positive impact the Budget would have on India-UK trade and investment partnership, with a particular focus on research and design in the UK, make in India and export to the world.