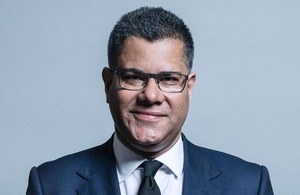 Sharma said that India has a vital role to play as nations look to build global resilience ahead of COP26. Photo courtesy: gov.org.uk

Sharma is on a three-day visit to India to deliberate on climate action with ministers, industry leaders and representatives of civil society organisations ahead of the 26th UN Climate Change Conference (COP 26) in Scotland’s Glasgow from October 31.

This comes as the UK calls on all G20 countries to sign up to net zero, set out clear plans to cut emissions by 2030, and commit to ending coal power, transitioning to electric vehicles, and restoring nature, with the richest nations providing financial support to the rest of the planet to go green.

Sharma said that India has a vital role to play as nations look to build global resilience ahead of COP26.

"All countries - including the UK and India - have a historic opportunity to build back greener from the COVID pandemic. Providing climate-resilient jobs that also promote economic growth will lead to a green industrial revolution that also makes financial sense," he added.

The meeting between Sharma and Kumar saw discussions on the need for India to increase storage capacity to optimise the installed renewable energy when India achieves its milestone of achieving 450 gigawatts of renewable energy by 2030.