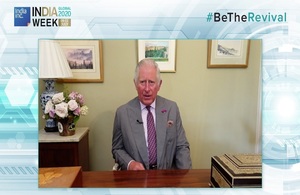 The three-day virtual summit brought together influential participants from the private and public sectors to discuss India, the UK and the world. This included an inaugural address by Indian Prime Minister Narendra Modi and a special address by His Royal Highness The Prince of Wales - who visited India last year - highlighting enduring UK-India bilateral ties and the importance of building a green, sustainable future.

Welcoming @pritipatel UK Home Secretary, as she delivers a special address on the global platform of #IGW2020

"It is difficult to think of two other countries so deeply intertwined as the living bridge between our nations strengthens. Our partnership for the future is based upon our shared values and determination to be a force for good as we collectively embark upon new challenges and new shared opportunities," she said.

The UK Foreign Secretary gave a speech by video, discussing the way Britain and India are maximising research and innovation links to tackle the challenges posted by COVID-19 and climate change.

#Covid-19 is a global challenge & the UK has been proud to stand shoulder to shoulder with India in our international response, says UK Foreign Secretary Rt Hon @DominicRaab in his #IndiaGlobalWeek2020 address. #BeTheRevival pic.twitter.com/vQOX2bdkdH

"As leaders in the international COVID-19 response, the UK and India also co-authored the G20 Action Plan, providing an immediate package of $200 billion of global support to the most vulnerable countries around the world. We also believe our friendship with India will be crucial as the UK fulfils its ambition to be an even stronger force for good in the world," Raab added.

Other senior UK speakers during the summit included Trade Secretary Lizz Truss who spoke about the expansion of the UK-India trade and investment relationship, Health Secretary Matt Hancock, who highlighted the strong collaboration between the two countries on health-tech and pharmaceuticals during the pandemic and Lord Jitesh Gadhia, Member of the House of Lords, who moderated a dialogue on the strategic relationship between the UK and India.

Lord @JiteshGadhia introduces the Annual UK-India Day to deliberate on the strategic UK-India partnership with Lord Tariq Ahmad, UK Foreign Office Minister, Indian High Commissioner to the UK Gaitri Kumar and Amit Kapur of TCS following on from a scene-setting by @DominicRaab pic.twitter.com/3q51cs6lQS