An Indian school group in UAE has set Guinness Records for ‘Most Contributions to a Handprint Mural’. 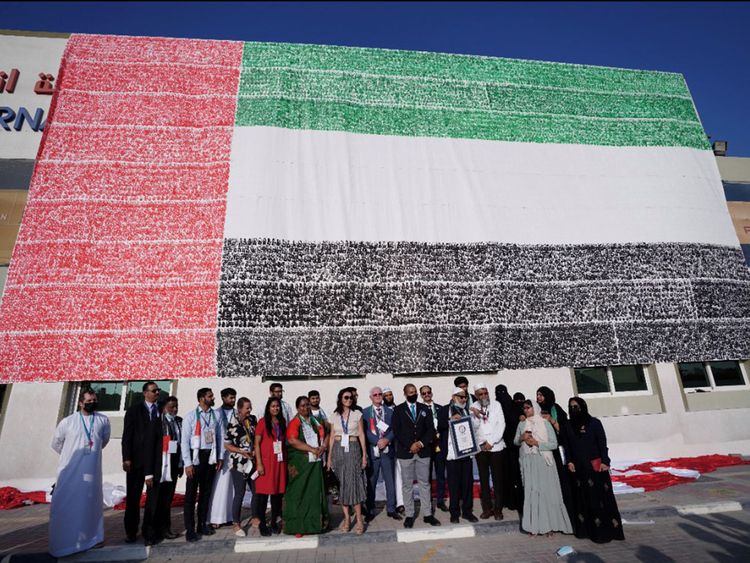 Held as part of the 50th UAE National Day celebrations, the flag was created by 16,367 members of PACE Education Group’s students, teachers, staff, parents from 64 countries under the theme ‘One Community, Many Hands’.

The nine metre-wide, 18-metre-long flag in red, green, black and white set the new Guinness World Record for ‘Most Contributions to a Handprint Mural’.

They painted one hand and made the handprint to fill the different colour portions of the UAE flag.

Ahmed Bucheeri, the official adjudicator for Guinness World Records, witnessed the event on Monday during which, all the colours of the UAE flag were joined together and the attempt was declared to be “Officially Amazing!”

This is the sixth time that the schools under the group entered the Guinness Records.

It was a personal milestone for Dr PA Ibrahim, chairman of PACE Education Group, as an Indian expat who had landed on UAE shores before its formation.

Having witnessed the historic moment of the formation of the UAE in 1971 and its phenomenal growth during the 55 years of his journey as an expat, Ibrahim said he was delighted to give back to this country through his education group and other business verticals.

He was also instrumental in the success of the group’s previous record-setting attempts, the group said.

As a tribute to the first Emirati astronaut Hazza Al Mansouri’s voyage to space, the ‘PACE to SPACE’ endeavour in 2019 aimed to create the largest human image of a rocket in the model of the Russian Soyuz MS-15 spacecraft and successfully achieved the group’s fourth Guinness World Record with 11443 participants.

In view of the COVID-19 pandemic in 2020, a fifth record was completed by making the largest online video chain of 3,537 people passing the UAE flag.

The latest attempt was conceptualised by vice-principal Shifana Muiz and senior administrative manager Safa Azad under the support of PACE Education Group and its institutions to commemorate the country’s 50th anniversary and to reflect on the unforgettable journey of development by the country, the group said. It said these achievements are the outcome of the enormous support extended by Dr Ibrahim, along with the group’s senior director Aseef Mohammed, deputy managing director Salman Ibrahim, executive director Zubair Ibrahim, and directors Bilal Ibrahim, Adil Ibrahim, and Latheef Ibrahim.