Advocacy and welfare group Migrant Workers' Centre (MWC) has flagged two dormitories in Geylang for lapses in hygiene and safety, according to a report by Todayonline on August 14, 2017.

MWC will be submitting documentation and its observations to the authorities, and will urge that stern action be taken against the employer, said MWC chairman Yeo Guat Kwang.

The centre made surprise visits to the dormitories at Lorong 13 and 17 Geylang slightly after midnight on Sunday, acting on complaints by foreign workers in the past week about their accommodation and meals. 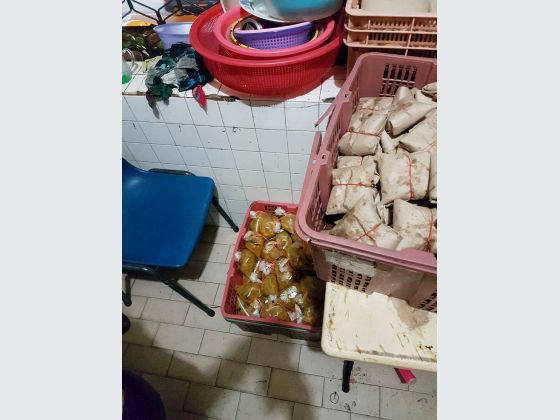 Food packets for the workers' breakfast and lunch the next day, which were already packed at midnight. Photo courtesy: MWC

The conditions in the two dormitories, both walk-up apartment units, were found to be similar. More than the maximum allowed number of eight occupants were living in each unit. There were also unsanitary common areas and sleeping quarters. Many of the workers had to sleep on the floor – including along the corridor and common areas – as no proper bedding was provided.

The electrical power points were overloaded, and there was a lack of proper storage or laundry facilities, Todayonline said in a report.

Other observations include bedbug and cockroach infestations, and more than 100 packets of breakfast and lunch for the next day which were left in the dormitory for collection. “(It was) more than seven hours before consumption of breakfast, and most alarmingly, more than 12 hours before lunch would be consumed,” said Yeo.

The workers were charged S$130 a month for these meals, which were often unconsumable, with the cost deducted from their salaries, they told MWC.