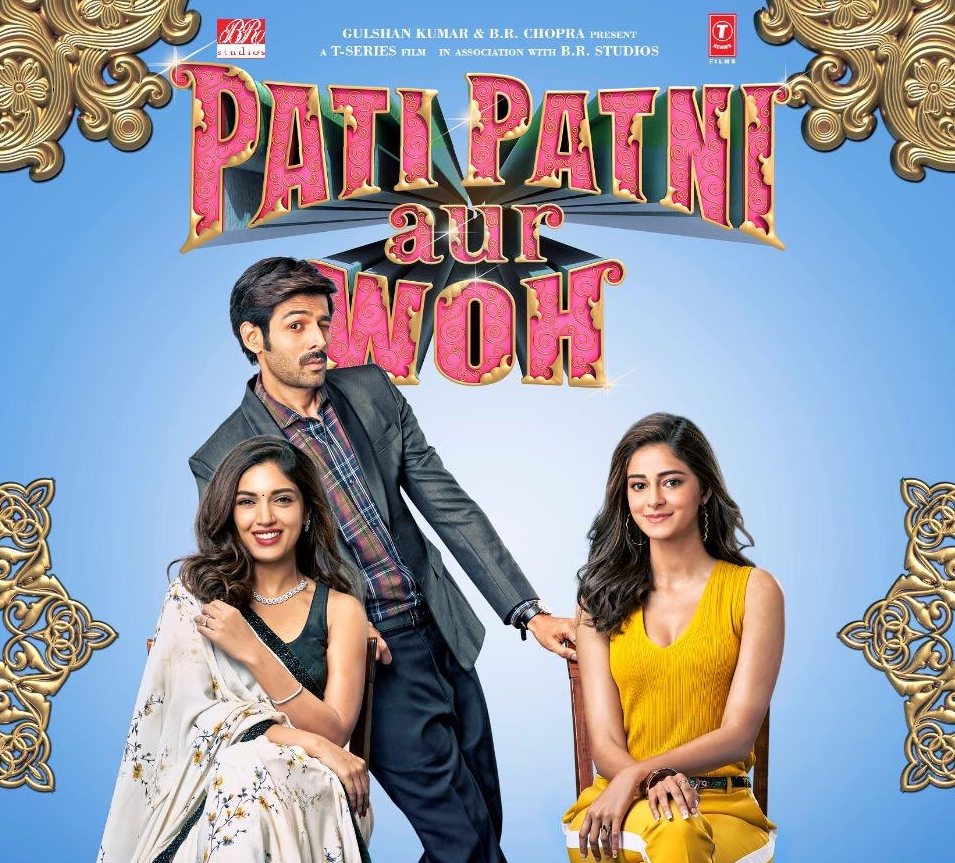 Pati Patni aur Woh is a remake of the 1978 film. Photo courtesy: Twitter/@BRStudiosLLP

Twitter users slammed the new trailer of Bollywood film Pati Patni aur Woh for a dialogue that jokes about marital rape. The line delivered by Kartik Aaryan, the lead of the movie, jokes about how unfair it is that men are termed "rapists" when they manage to trick or convince their wives to give in to their demands and have sex with them.

Twitter users wasted no time in lambasting the movie, the actor and the filmmaker for joking about marital rape especially in the age after #MeToo scandals have rocked various industries across the world, including the Indian film industry.

Rape is NOT a joke. Jokes on rape r NOT funny.
B-town can't present anything just like that with a meaningless disclaimer before beginng the crap. Is marital rape a "jugaad sex"? Movie makers,REALLY?Disgraceful. #PatiPatniAurWoh @TheAaryanKartik @NCWIndiahttps://t.co/aory0ybHNQ

Saw trailer of #PatiPatniAurWoh and what a shameful statement what says that "Rape" is a "Jugaad Sex" Utterly disgraced by this dialogue and atleast didn't expect this from @TheAaryanKartik .

One Word- Disgusting.. you guys have made marital rape a mockery just for sake of earning money...such a disastrous and shameful act...@TheAaryanKartik @bhumipednekar didn't expect this from you guys..#patheticmonologue

Stop telling women to quit being sensitive towards rape jokes. We deal with the repercussions of a society that thinks this way everyday. The irony remains that to this day marital rape is not recognised as a criminal offence.#PatiPatniAurWoh

I am an aspiring filmmaker taking a Screenwriting course. And I strongly condemn the views of writer, director and the producer of #PatiPatniAurWoh to write absolutely irresponsibly on marital rape. I request you to take that particular line out from the final cut.@TSeries

Not expecting @TheAaryanKartik to be the moral compass of the society but rape jokes aren't funny. #PatiPatniAurWoh makers, this is a dangerous trend.

The sickening pervasive misogyny that is increasingly becoming a trend in Bollywood is disturbing to day the least. Rape jokes, crass remarks about 'obtaining' sex from women as if that's all that one can 'get' from the fairer sex..... what else is left? #PatiPatniAurWoh

I was feeling only queasy due to the #DelhiSmog but I threw up after watching #PatiPatniAurWoh trailer.
It's like no one involved in making that film has any idea about consent. https://t.co/RbujTDNeBj

Shame on you, @TheAaryanKartik ! Marital rape is a joke to you. The scripts you like and land just end up presenting toxic masculity in different costumes. Shame on you, the writers of #PatiPatniAurWoh

Directed by Mudassar Aziz and co-produced by T-Series and B R Studios, Pati Patni aur Woh is a remake of the 1978 movie of the same name. It tells the story of Abhinav Tyagi (Kartik Aaryan), also known as Chintu, who marries Vedika Tripathi (Bhumi Pednekar) and lives happily ever after - but only until he meets a new colleague, Tapasya (Ananya Pandey). He tells Tapasya that his wife is having an affair - this being the spin given on the original Sanjeev Kumar, Vidya Sinha and Ranjeeta Kaur starrer, where the husband tell his secretary that his wife is terminally ill.

Actress Bhumi Pednekar recently defended the film, telling IANS “The story is very empowering to both genders. I think that the makers made sure that this does not turn into a sexist, baseless film. I do not think anyone who is part of this film, including us actors, belong to that school. We were extremely conscious of the fact that we do not end up making it into a sexist comment... This is a subject that could have gone wrong easily. But they (the makers) have been sensitive and careful.”

However, after seeing the trailer, Twitter users are not buying this and are calling the film out for its insenstivie, crass and humourless joke about rape, especially marital rape in the post #MeToo era and that too in a country where crimes against women are a major cause of concern.