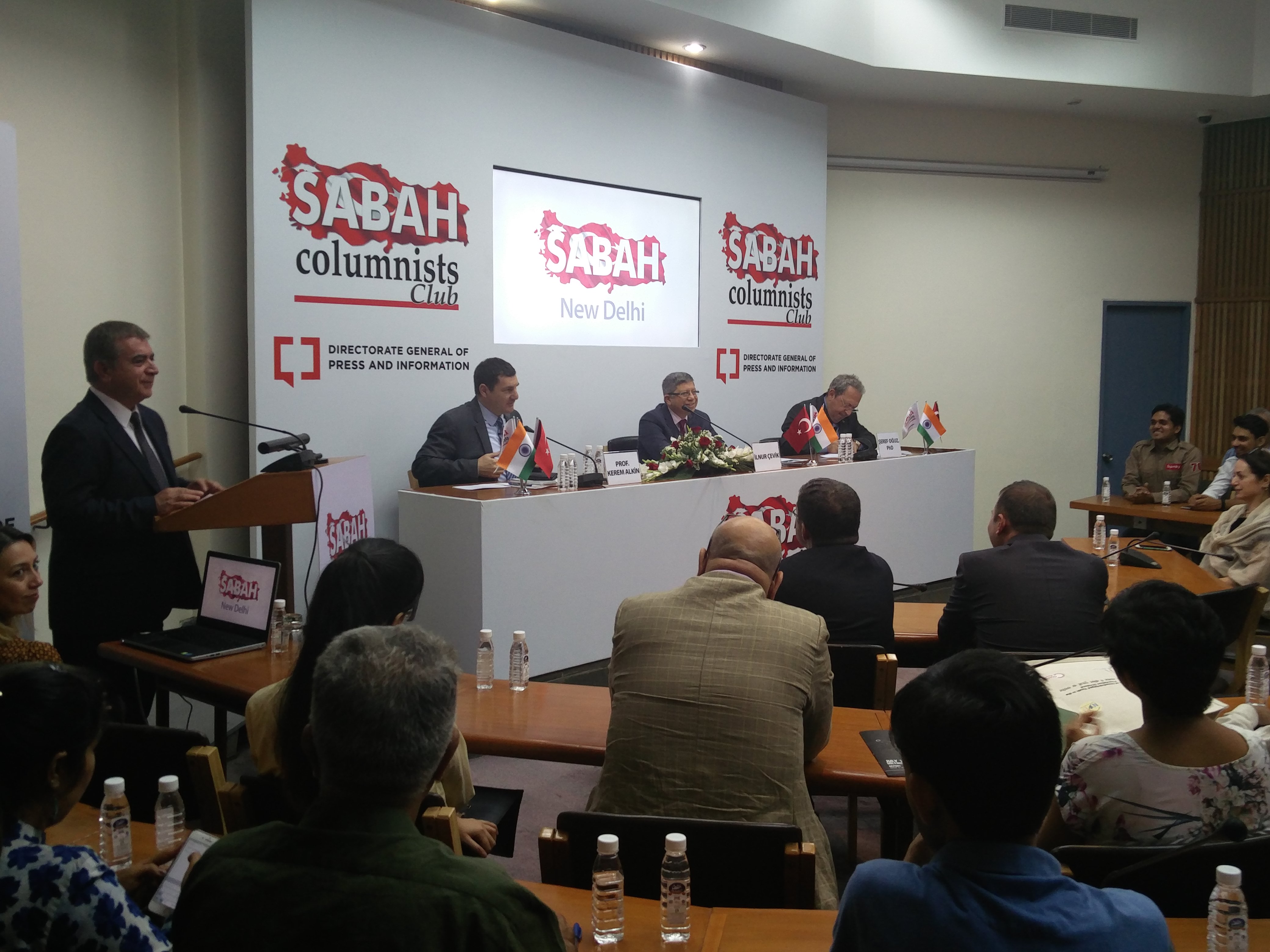 The seminar at the India International Centre Annexe. Photo: Connected to India

Award-winning journalist and media mogul and current Senior Advisor to President Erdogan Ilnur Cevik headlined the seminar with a talk on ‘India and Turkey: Rising stars of the 21st century’. He was followed by Professor Kerem Alkin, a noted academician in Turkey and Professor at Istanbul Medipol University’s Faculty of Business and Managerial Sciences and Dr Seref Oguz, a columnist for Sabah. The panel was introduced by Mehmet Akarca, the Director-General of Press and Information for Turkey.

The panellists reiterated Turkey’s determination to remain neutral in global politics and, in response to a question from Connected to India, said the Turkish government, which is a traditional ally of Pakistan, would not support either Pakistan or India on controversial issues like Kashmir.

Cevik in his address touched upon the issue of the coup in Turkey last year and stated that the Turkish people were being punished by the European Union (EU) for stopping a coup. He was referring to the monitoring status that Turkey is facing after allegations that President Erdogan was trying to manipulate the referendum on Constitutional amendment in Turkey.

“The Fetullah Gulen Organisation had infiltrated our government, military and judiciary, and President Erdogan was very decisive in stopping this terrorist organisation’s actions. Now, the international community is against him and we hope India will stand with him.” Erdogan was congratulated by only three heads of state after his Constitutional Amendment referendum ended in victory.

He also touched on the issue of Turkey’s dissatisfaction with the current United Nations Security Council, particularly their veto power, and called for it to be revoked. 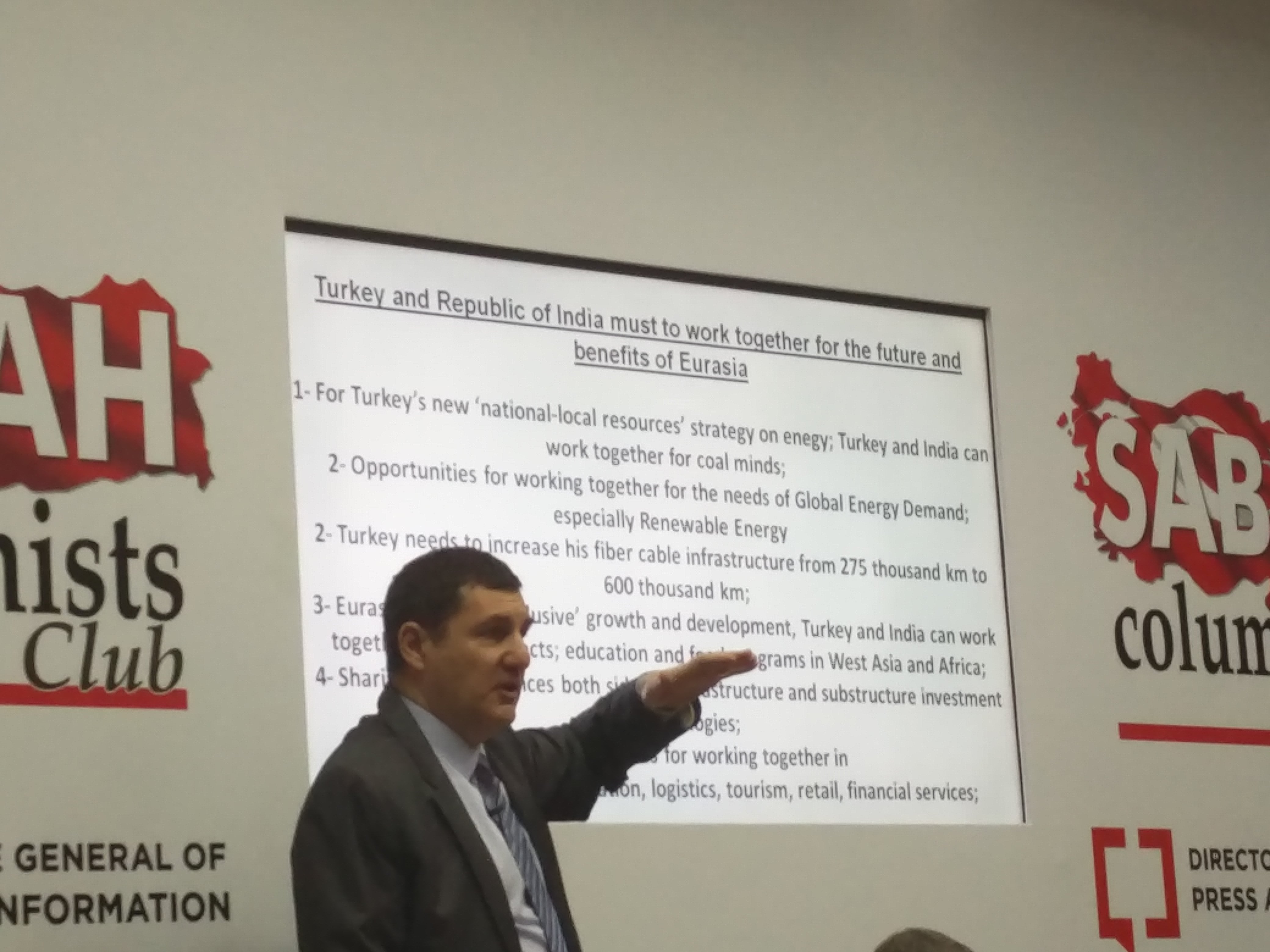 Professor Alkin highlighted the economic development that Turkey has undergone in his presentation and showed the growth of Turkey’s GDP despite the coup last year, especially in the Bosphorus Strait area.

“We have completed a USD2.3 billion project in the Bosphorus region. We have created a tunnel linking Asia and Europe under the Bosphorus Strait. We do this not just for us, but for the connection of the world,” he said. “What we can do together with India is look into a new resources strategy and energy policy. We can learn from India’s experiences in infrastructure development. Turkey and India can work together and there are huge opportunities to share technological and educational information to develop various sectors.”

Developing on the theme of economic cooperation, Dr Seref Oguz claimed that the Turkey India Business Council, which last met in 2009, aims to improve bilateral trade. “There are 14 Turkey-based companies operating in India with a total revenue of USD 212 million dollars. In Turkey, by 2013 there were 179 Indian companies operating in our nation.”

The presentations were followed by a discussion with the audience, where the speaker fielded questions on topics relevant to Turkey such as the Kurdish problem, NATO membership and alliance with Pakistan’s repercussions on its quest to make friends with India.