US President Donald Trump has said that a statue of Mahatma Gandhi was among those vandalised by protesters in Washington DC in the aftermath of the death of African-American George Floyd, calling them a "bunch of thugs". 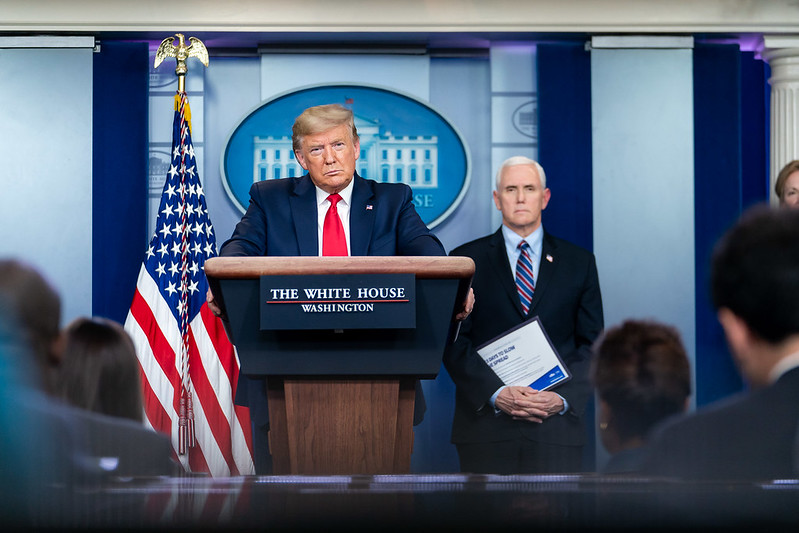 The vandalised statue of Mahatma Gandhi was restored later by the Indian Embassy, with the help of National Park Police and the State Department. Photo courtesy: White House

"You know, they started ripping down Abraham Lincoln. When they hit Lincoln, I said wait a minute. This is the man and you can do - then they hit George Washington, Thomas Jefferson. They had everybody," Trump said at a well-attended election rally in Minnesota, a State that he lost by a little over 44,000 votes in 2016.

"They even had (Mahatma) Gandhi. All Gandhi wanted was one thing, peace. Right? We have peace. Rip down his statue. We don't like him. I don't think they have any idea what they're doing," President Trump said.

The vandalised statue of Mahatma Gandhi was restored later by the Indian Embassy, with the help of National Park Police and the State Department.

The US President told his cheering audience that he had signed an executive order that would put such vandals in jail for 10 years.

George Floyd died in Minneapolis on May 25 after white police officer Derek Chauvin handcuffed and pinned him to the ground, and knelt on his neck for more than eight minutes while the 46-year-old from Houston gasped for breath.

The footage, which went viral, showed Floyd pleading with the officer, saying he can't breathe. His death sparked nationwide violent protests with some protesters resorting to vandalism, looting and rioting across the country, leaving behind a trail of destruction.