US President Trump and Democratic nominee Joe Biden made their final arguments to voters at their second and final presidential debate, squaring off in Nashville, Tennessee, with less than two weeks until the election. 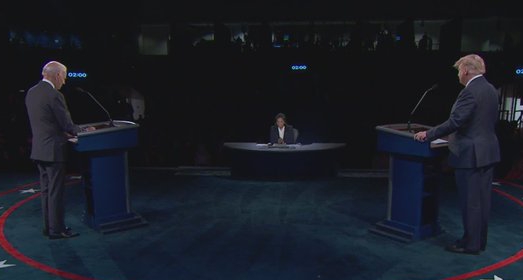 Biden blasted Trump for his handling of the pandemic that has killed more than 220,000 Americans. Photo courtesy: C-SPAN

The debate was a much more orderly affair than the first time the two candidates met in September, with relatively few interruptions and stricter controls on speaking time. The 90-minute event featured 15-minute segments touching on COVID-19, foreign policy, the economy, race, climate change and more.

The President, who is lagging in the polls, defended his record on the coronavirus pandemic while criticising Biden for failing to act on a variety of Democratic proposals while he was vice president, warning that Democratic priorities would hamper the economy.

"You will have a depression the likes of which you've never seen" if Biden is elected, Trump said. He also brought up recent reports about Biden's son Hunter's overseas business dealings, while defending his own foreign business ventures.

Biden was perceived as the winner of the final debate, according to a quick CNN poll of debate viewers and a panel of undecided North Carolina voters. Photo courtesy: C-SPAN

In the only mention of India, while speaking on climate change, Trump called the air quality in India, China and Russia “filthy”. He said, “India, it’s filthy. The air is filthy.”

Biden blasted Trump for his handling of the pandemic that has killed more than 220,000 Americans, and said he had never been involved in his son's business deals, calling the president's accusations "malarkey." He often turned to directly address the audience at home over the course of the night.

"Anyone who is responsible for that many deaths should not remain as President of the United States of America," he said at one point. "I will take care of this. I will end this. I will make sure we have a plan."

Biden was perceived as the winner of the final debate, according to a quick CNN poll of debate viewers and a panel of undecided North Carolina voters.