Trump agrees to let Kashmir be a bilateral issue between India, Pakistan

US President Donald Trump, speaking during his meeting with Indian Prime Minister Narendra Modi on the sidelines of the G7 Summit in France, said that the Kashmir issue had been discussed between the two leaders. 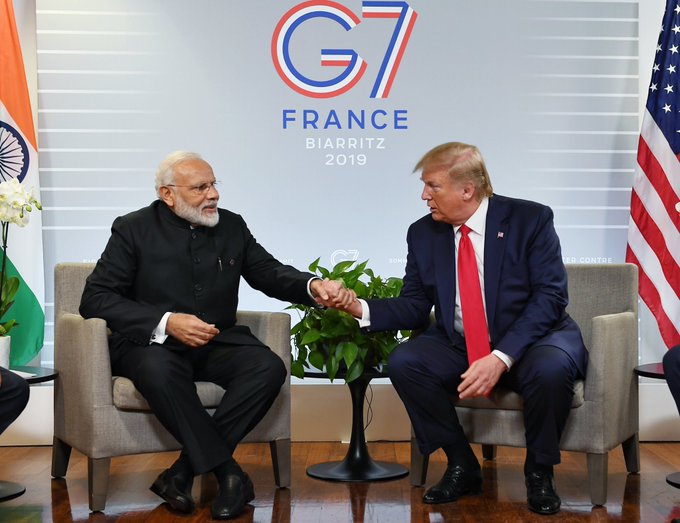 Modi (left) reiterated India's stance as he sat next to Trump and categorically rejected any scope for third party mediation between India and Pakistan on Kashmir. Photo courtesy: Twitter/@PMOIndia

Trump, who has repeatedly offered to mediate between India and Pakistan, took a different tone on his previous offers to serve as mediator.

"We spoke last night about Kashmir, Prime Minister [Modi] really feels he has it under control. They speak with Pakistan and I'm sure that they will be able to do something that will be very good," said Trump.

Just wrapped up a great meeting with my friend Prime Minister @NarendraModi of India at the #G7Summit in Biarritz, France! pic.twitter.com/q0NOnEcjFO

Modi reiterated India's stance as he sat next to Trump and categorically rejected any scope for third party mediation between India and Pakistan on Kashmir, saying the two countries can discuss and resolve all issues bilaterally and "we don't want to trouble any third country."

Without directly referring to the Kashmir issue, PM Modi said, "There are many bilateral issues between India and Pakistan, and we don't want to trouble any third country. We don't bother other countries about these issues. We can find solutions through discussions."

#WATCH: Prime Minister Narendra Modi during bilateral meeting with US President Donald Trump at #G7Summit says,"All issues between India & Pakistan are bilateral in nature, that is why we don't bother any other country regarding them." pic.twitter.com/H4q0K7ojZT

The US President was more cautious when it came to discussing other matters. Without going into specifics, Trump also said that “we are talking about trade, we're talking about military and many different things”.