The dancers that lit up Kalaa Utsavam 2020, Part 2

Kalaa Utsavam 2020’s theme of the Tree of Life invites audiences to find comfort in a series of live carnatic music and classical dance performances by Singapore's Indian arts community.

The dancers featured were selected as part of the Kalaa Utsavam Dance Stage LIVE open call.

Sneha started learning bharatanatyam at the Temple of Fine Arts (TFA), Singapore, under the guidance of her guru Lakshmi Krishnan. She has performed on various platforms and many dance drama productions presented by TFA. In January 2018, she completed her arangetram.

Sneha is currently furthering her journey in bharatanatyam and is also exploring her interests in odissi under guru Kalaivani Kumareswaran at TFA. She currently teaches bharatanatyam at TFA and facilitates its children’s arts education. 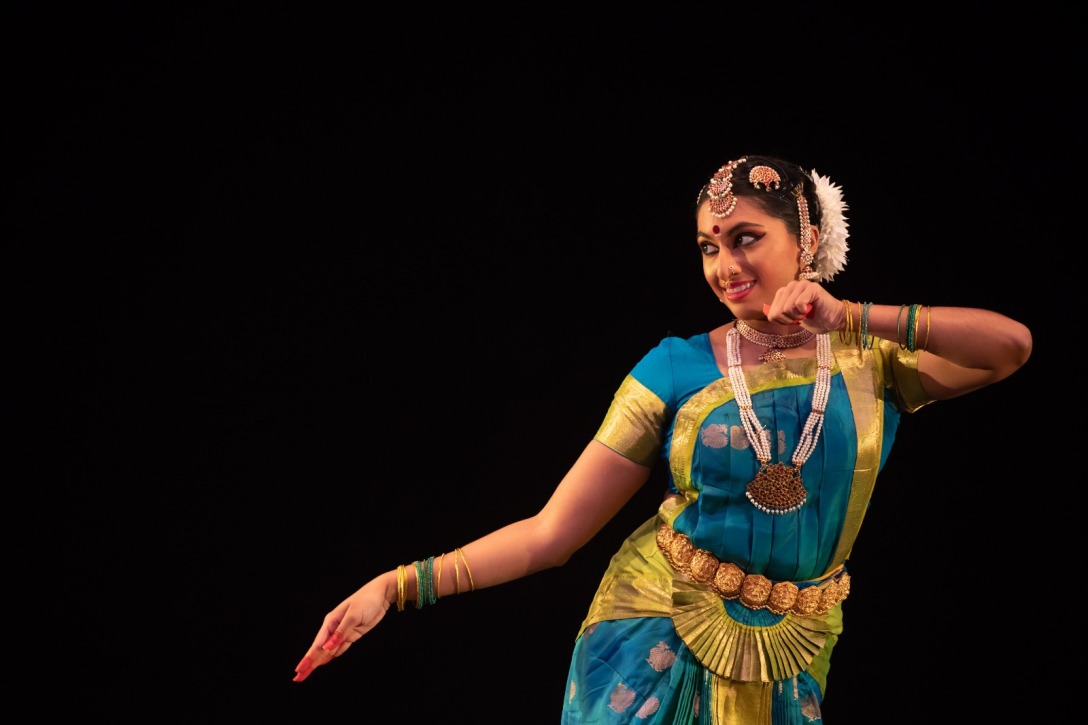 Sneha Ajayan started learning bharatanatyam at the Temple of Fine Arts under the guidance of her guru Lakshmi Krishnan. Photo courtesy: Esplanade

Sneha performed Ardhanarishwara Ashtakam - Ardhanari, the union of the cosmic father Shiva and the feminine divine Shakti, coming together as the universal parent. While Shakti signifies creation, Shiva represents dissolution and together they represent the circle of life.

The ardhanarishvara is said to be one of the oldest representations of equality between the male and female in the creation of the cosmos. Like how words do not exist without their meaning, neither does Shiva exist without Shakti nor Shakti without Shiva.

Kshirja Govind is a Singapore-based bharatanatyam dancer, learning under Guru PN Vikas at the Singapore Indian Fine Arts Society (SIFAS). She was awarded the Best Student and Natyavisharad on completion of her Dance Diploma at SIFAS. She is also a company dancer with Apsaras Arts. 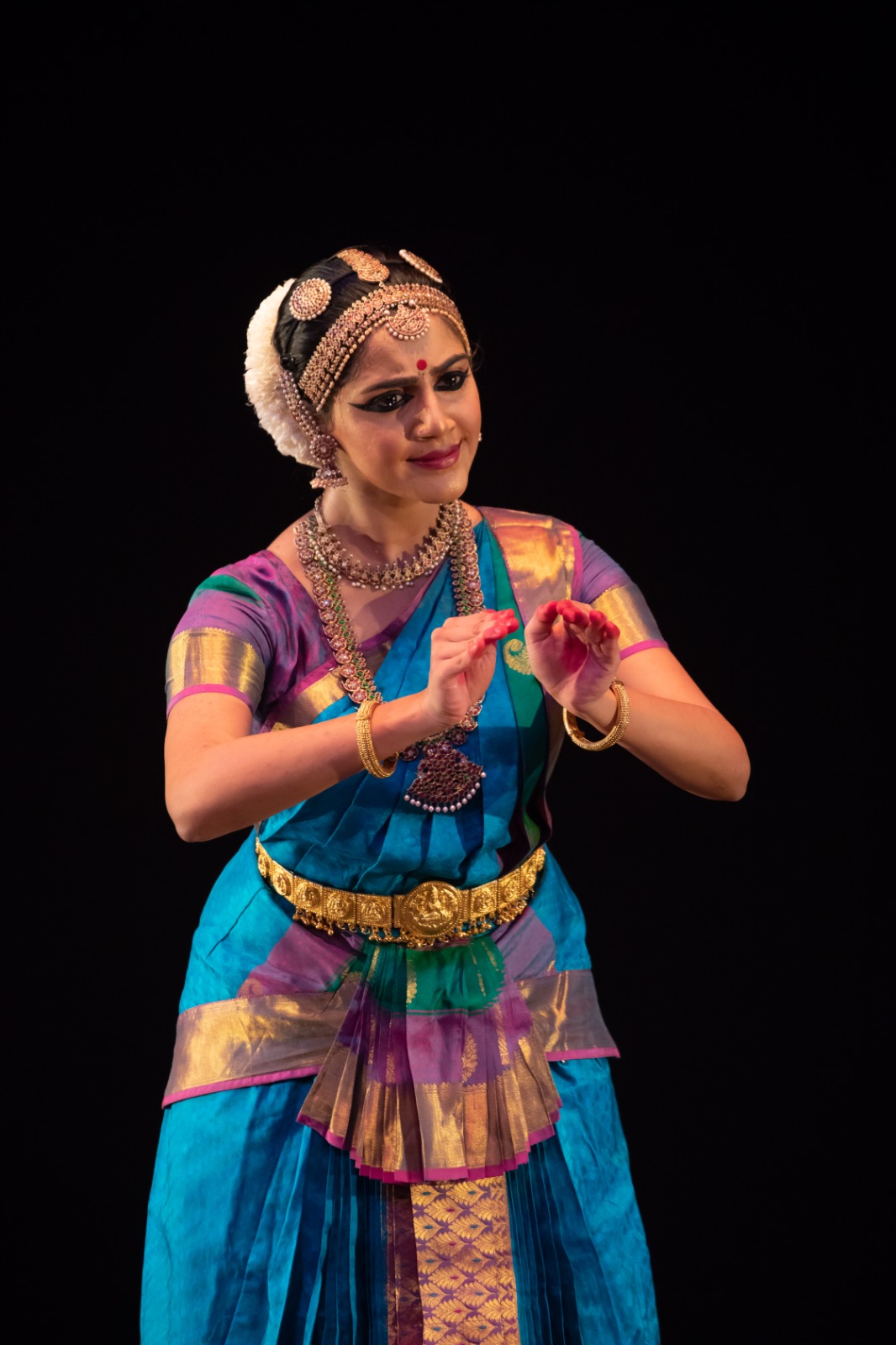 Kshirja Govind was awarded the Best Student and Natyavisharad on completion of her Dance Diploma at SIFAS. Photo courtesy: Esplanade

Ananda Natanam - The piece describes the dialogue between a Murugan bhakta (religious devotee) and a beautiful peacock. Upon seeing the peacock dancing, the bhakta asks, "Do you dance because you saw Lord Muruga? Because the deer-eyed Valli stroked you on her lap? Because goddess Parvati glanced your way? Or because Lord Muruga sat upon you? What is the reason for this beautiful joyous dance?"

Ashtapadi - Thava virahe - The Jayadeva ashtapadi “Tava virahe vanamali” in Mian ki Malhar, as scored by MS Sukhi, visualises Krishna's lovelorn condition as described by the sakhi to Radha — when even the rays of the moon scorch him and he wails piteously for Radha, lamenting his weakness.

Samyukta Venkatraman has been trained in bharatanatyam and devanrityam, under the tutelage of Guru Ranjani Ganesan Ramesh of Ambaanandeshwari Kalalaya for the last 15 years. Samyukta completed her thematic solo recital - Rangarpanam - in 2012, and went on to perform extensively in solo, thematic jugalbandhis, and group productions as a principal dancer of the Padam dance production company along with her guru across India.

She is now undergoing advanced training in Ganalayakaranam and Devanrityam. Samyukta is also a trained carnatic musician in the Semmangudi bani, under Guru Lakshmi Krishnakumar, and has several solo concerts to her credit. 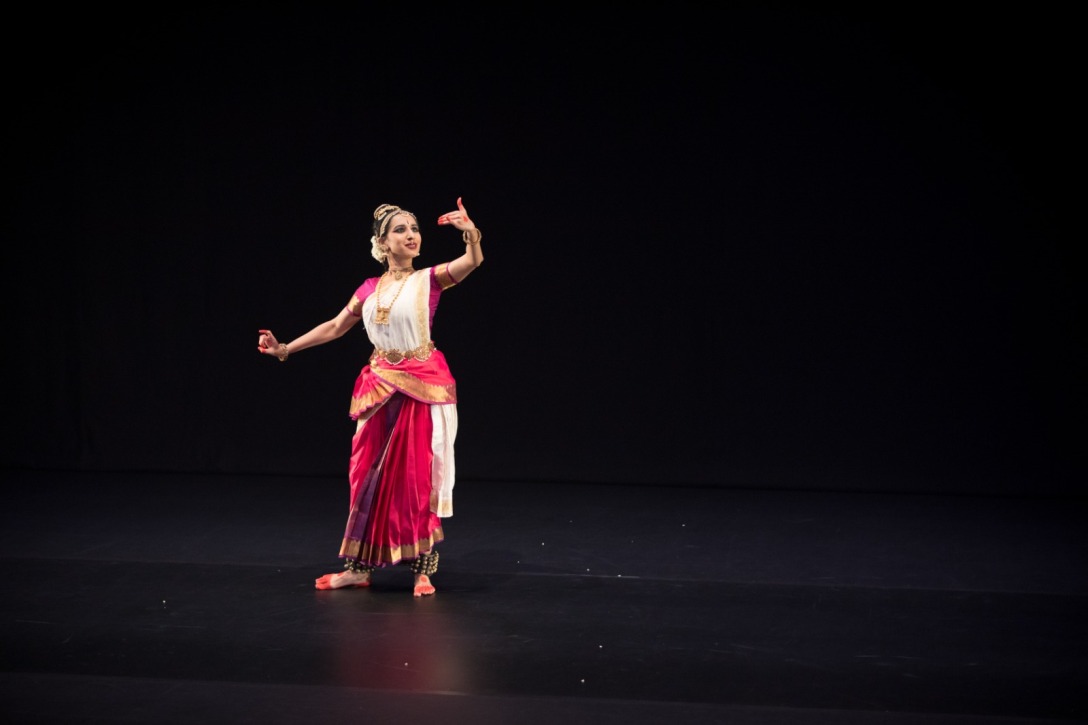 Samyukta Venkatraman has been trained in bharatanatyam and devanrityam. Photo courtesy: Esplanade

Samyukta performed Saraswathi Layakavitha - Saraswati, the goddess of knowledge, is often depicted with books, a japa mala (prayer beads) and a veena in her hands, riding a swan, or sitting on a white lotus, dressed in white. Employing the traditional "Saraswathi Layakavitha " this piece explores the attributes of Saraswathi, "Vaagadeeshwari" as Gana (music), Laya (rhythmic) and Kavitha (poetry). Saraswati is envisioned as the energy that flows through the seven chakras of the body, here the seven musical notes or "swaras".

Maanasa completed her SIFAS diploma in bharatanatyam in 2015 with the title of Natya Visharadh after receiving the Best Student Award in 2011. She went on to produce and perform an original solo bharatanatyam production, Acharya Devo Bhava, in 2017 at NUS University Cultural Centre under the guidance of Guru Gayathri Chachithanandar. She is currently under the tutelage of Guru PN Vikas in SIFAS and Guru Gayathri.

Maanasa was awarded the Emerging Artist Award by Singapore Management University (SMU) to recognise her achievements in the fields of bharatanatyam and emceeing. She is currently a fourth year Accountancy student at SMU. 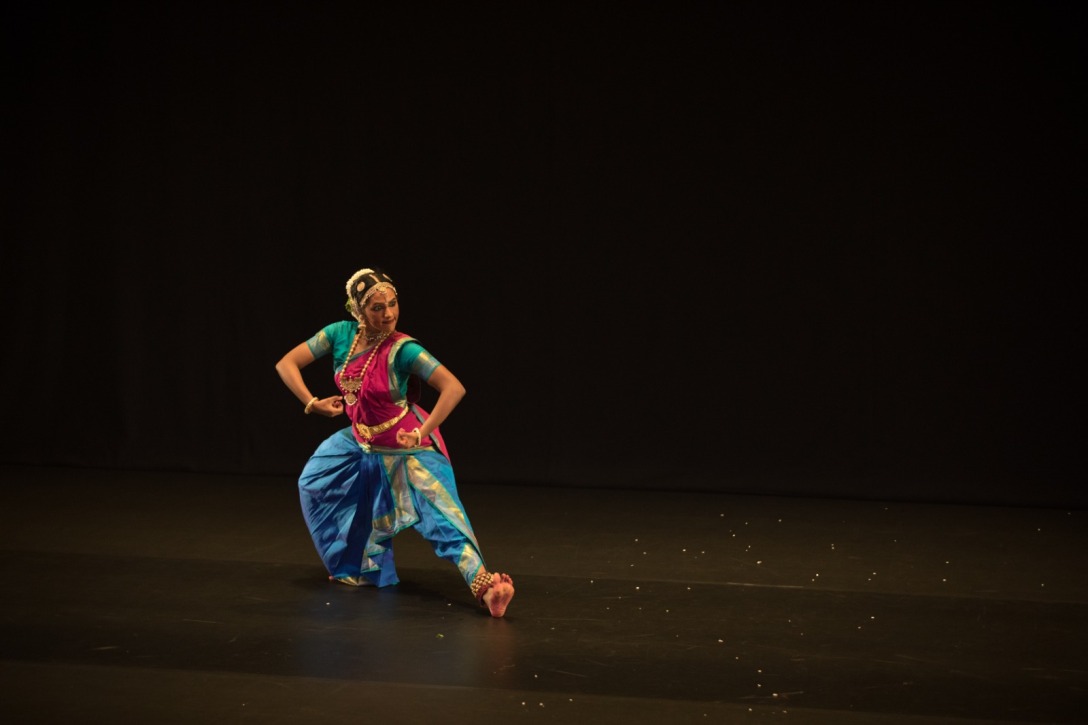 Maanasa performed the Thillana - This is the code of a dance performance where the dancer depicts her devotion and her wish to feel the divine through brisk rhythmic patterns. The verses are a prayer, "Oh Krishna! The whole world knows that you captivate the hearts of young maidens! Oh Madhusudana! Please stop your antics and bless me with your presence!"

Meenalochani Anandan started learning her art form at the age of six from guru Lavanya Raghuraman at Alapana Arts. She continued her learning at Singapore Indian Fine Arts Society and completed her arangetram in 2015 and her Diploma in bharatanatyam in 2016.

Meenalochani is currently a Ministry Of Education-certified dance instructor and runs her own dance school, Makoolam Kalaikoodam. She is also a Doordarshan graded artist from Chennai, India. She has completed her further bharatanatyam training in Bharatha Kalanjali, at the Legends Dhananjayans, Chennai in 2018. 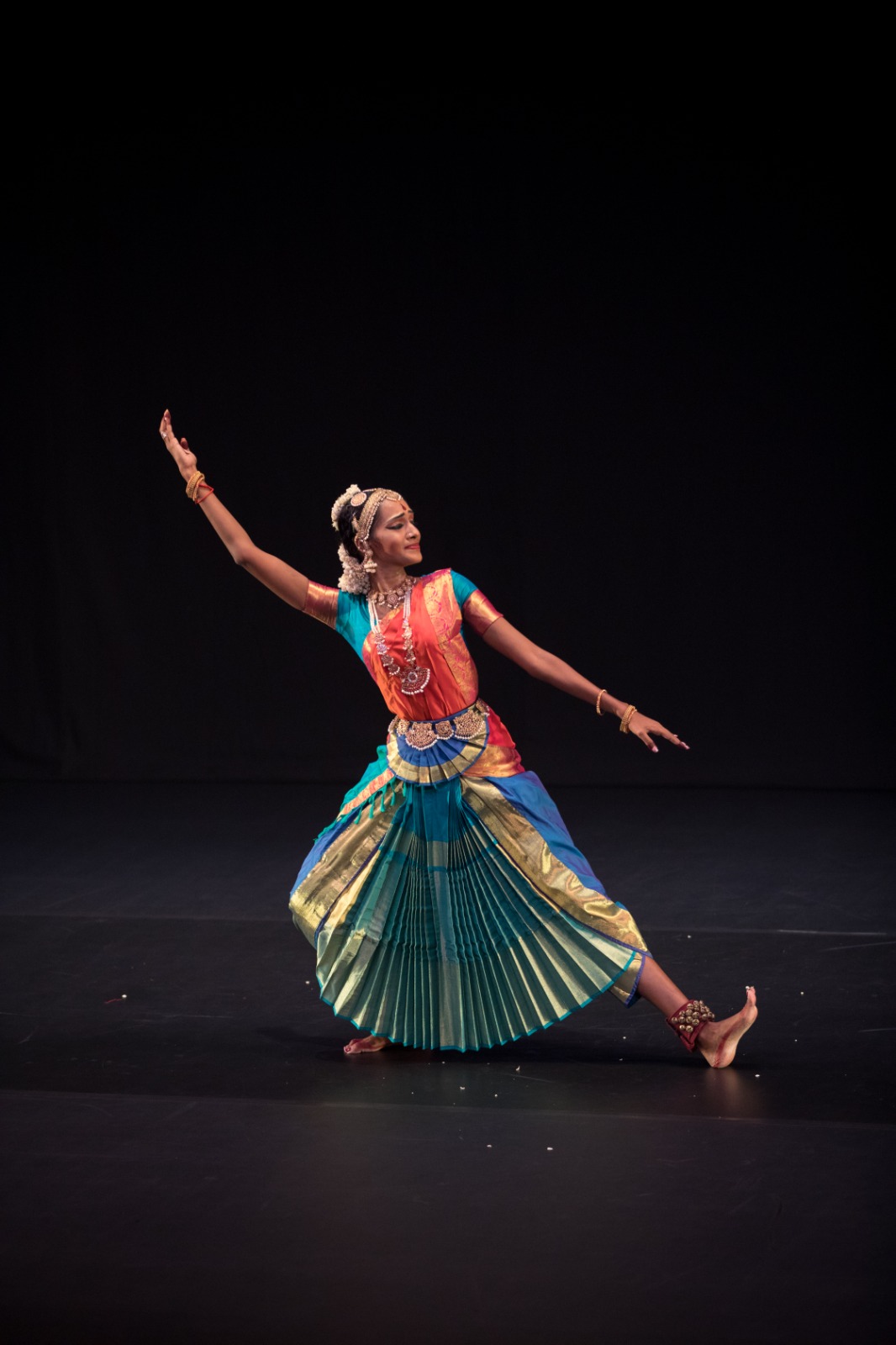 Meenalochani is a Ministry Of Education-certified dance instructor and runs her own dance school. Photo courtesy: Esplanade

Natarajanjali - An invocation piece dedicated to Lord Nataraja, the God of dance. The piece, in ragam Naatai and talam Adi, is choreographed by the Dhananjayans.

Rangapura vihaara - Set to Rangapura Vihara which is a popular Carnatic song composed by Muthuswami Dikshitar and dedicated to lord Ranganathaswamy of Srirangam.

Subiksha Raman commenced her dance journey under the tutelage of the Kesavan Sisters. She has since performed locally and abroad in Bharathaa Arts’ productions such as Utchi Thilagam, Stree Shakthi and Kaveri, and won top prizes at dance competitions. Most recently, she performed in the Singaporean and Australian premieres of ULA, a Bharathaa Arts production conceptualised and choreographed by Anjana Anand, and as part of the digital initiative Swaanubhava, organised by CHETHAS. 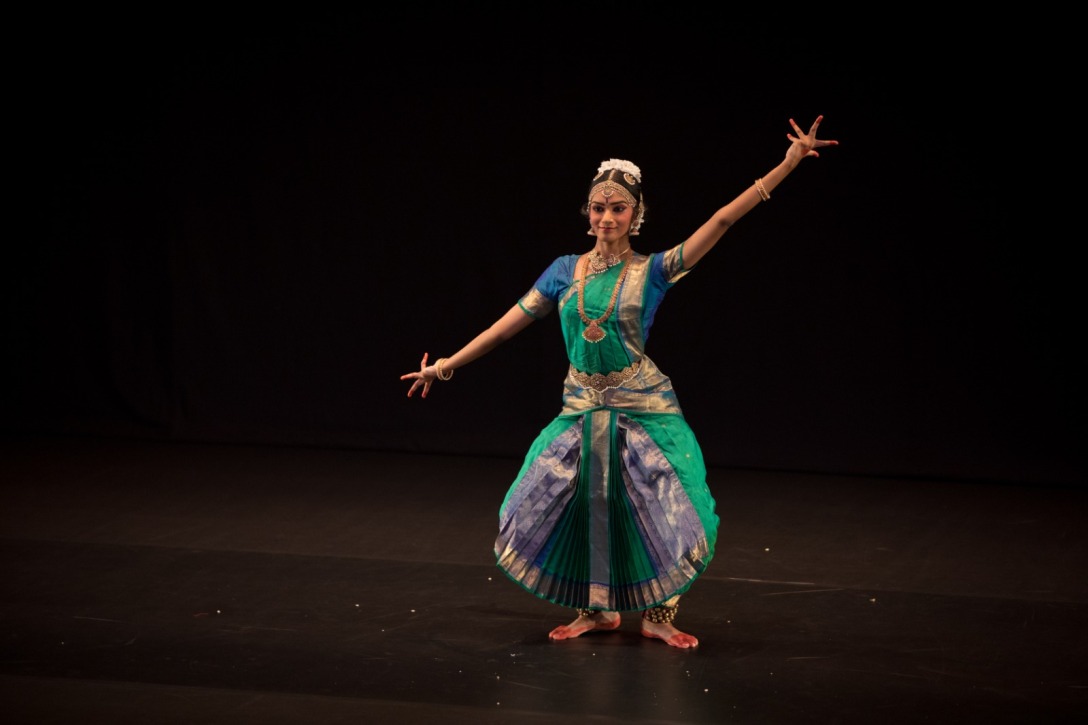 Padham - An abhinaya-centric piece in the bharatanatyam repertoire, where the dancer explores storytelling using primarily hand gestures and facial expressions. In Naan Oru Vilaiyaattu Bommaiya, the suffering poet poses questions to the divine Mother of the Universe, asking if he is just a mere plaything in her hands.

Thillana - The Kalinga Narthana Thillana - a composition of Oothukadu Venkatakavi - describes the visual spectacle of young Krishna dancing on the hood of the serpent Kalinga. With its intricate jathis, the piece is a test of the dancer’s nritta, and combines complex footwork with fast-paced rhythmic patterns to present a fitting finale.

Juslina Sathguru is a graduate (bharatanatyam) of the Temple of Fine Arts (TFA) and is also an undergraduate at Nanyang Technological University pursuing Chemistry and Biological Chemistry with honors. She is currently learning nattuvangam under her guru, Lakshmi Krishnan who is also her mentor in bharatanatyam. She has also been part of TFA's large-scale productions like Taal Express (2013) and Ramayana (2012). 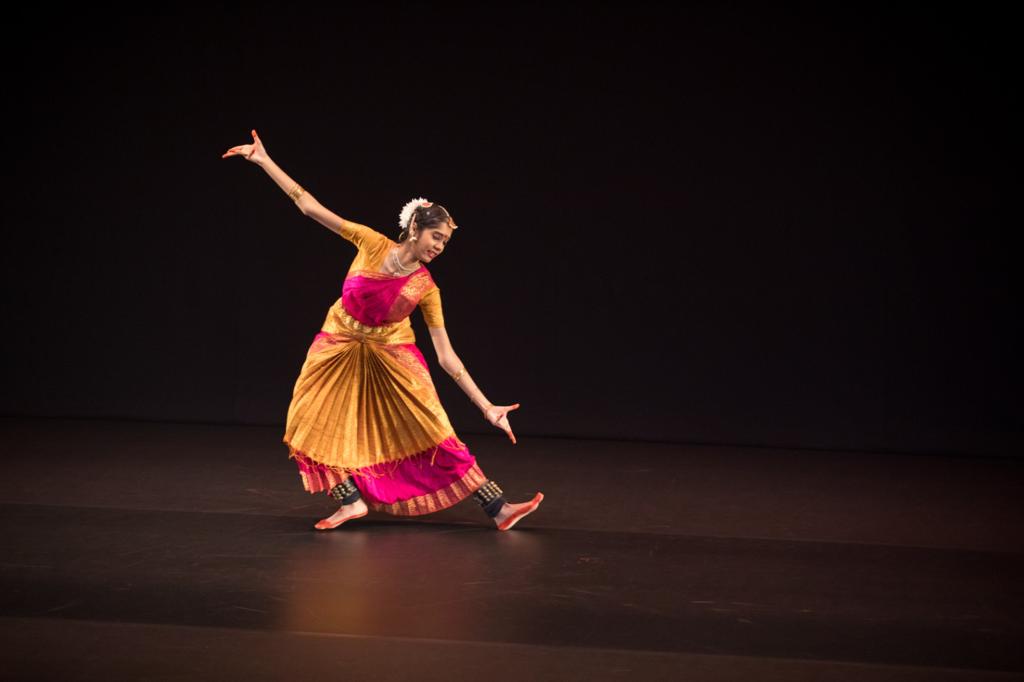 Juslina Sathguru is a bharatanatyam graduate of the Temple of Fine Arts (TFA). Photo courtesy: Esplanade

Maitreem Bhajata - This year has brought to light many injustices and differences in the world, as well as the importance of standing together with each other. This work is a small reminder on the importance of living life with love and harmony, renouncing war and greed, and viewing each other as equals. Maitreem Bhajata is a universal prayer of peace, unity and prosperity, in raagam Yamuna Kalyani, and a composition of Jagadguru Chandrasekharendra Saraswati.

Aadugindran Thillana - The thillana is a rhythmic composition usually performed at the end, as a joyous culmination of a repertoire. It is generally composed of rhythmic syllables and lyrics. In this thillana the lyrics, by Swami Shantanad Saraswati, have been juxtaposed with the rhythmic syllables.

Amara Rama is a disciple of guru Dr Siri Rama for bharatanatyam and kuchipudi, and guru Jyotika Joshi, under whom she is a final year student of kathak at the Singapore Indian Fine Arts Society. She has been performing regularly since she was a toddler, and performed her arangetram recital in bharatanatyam in August 2019 in Mumbai. Amara is also a seventh year student of Hindustani music under guru Sonali Sinha Biswas of SIFAS. 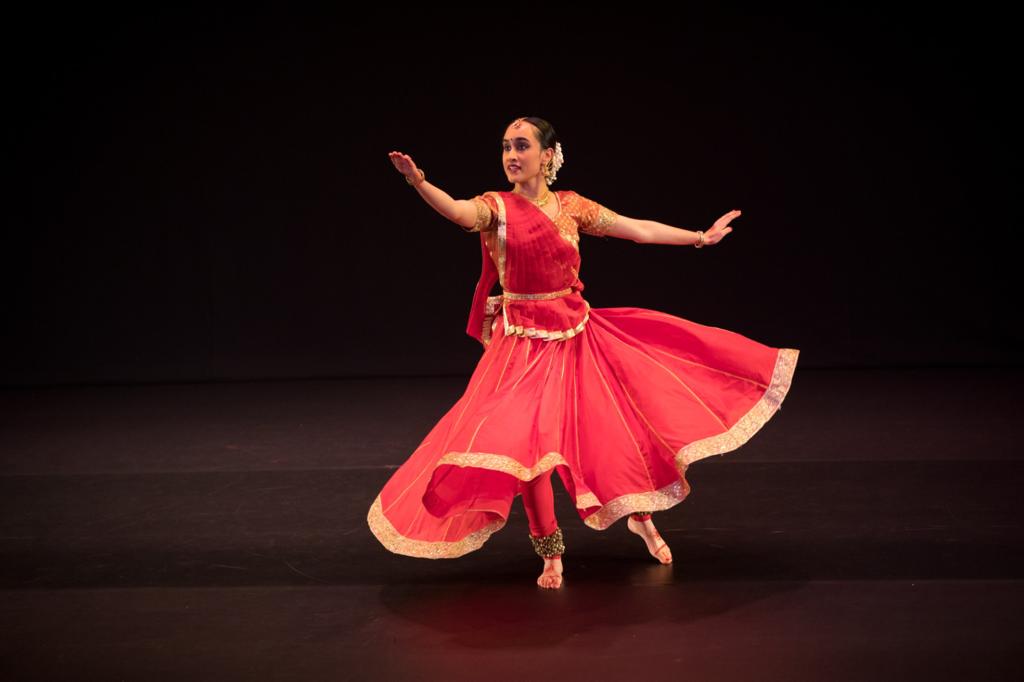 Amara Rama is a disciple of guru Dr Siri Rama for bharatanatyam and kuchipudi, and guru Jyotika Joshi, under whom she is a final year student of kathak. Photo courtesy: Esplanade

Thumri - This abhinaya (expressions) piece in raga Desh has been composed by Narayan Prasad. The nayika (heroine) in this piece is complaining about the antics of the playful, young Lord Krishna, who teases her on her way to collect water from the river Yamuna. The thumri has been choreographed by Amara's guru, Jyotika Joshi.

Teental - This is a pure dance piece showcasing the quintessential elements of the Jaipur Kathak Gharana's technical repertoire. Amara will present thaat, uthaan, parans and tihais and end with a dazzling sequence of chakkars. The padhant is by Guru Rajendra Gangani, and the choreography by guru Jyotika Joshi.

Devika Menon has been learning bharatanatyam for 11 years and is currently a student of Guru PN Vikas at Singapore Indian Fine Arts Society. She has participated in and won prizes at competitions in Singapore including Yuvajanotsavam, Bharatham, PE Talent Hunt, ArtsHub and GIIS Jhankaar. She has also performed at various temples in Singapore. 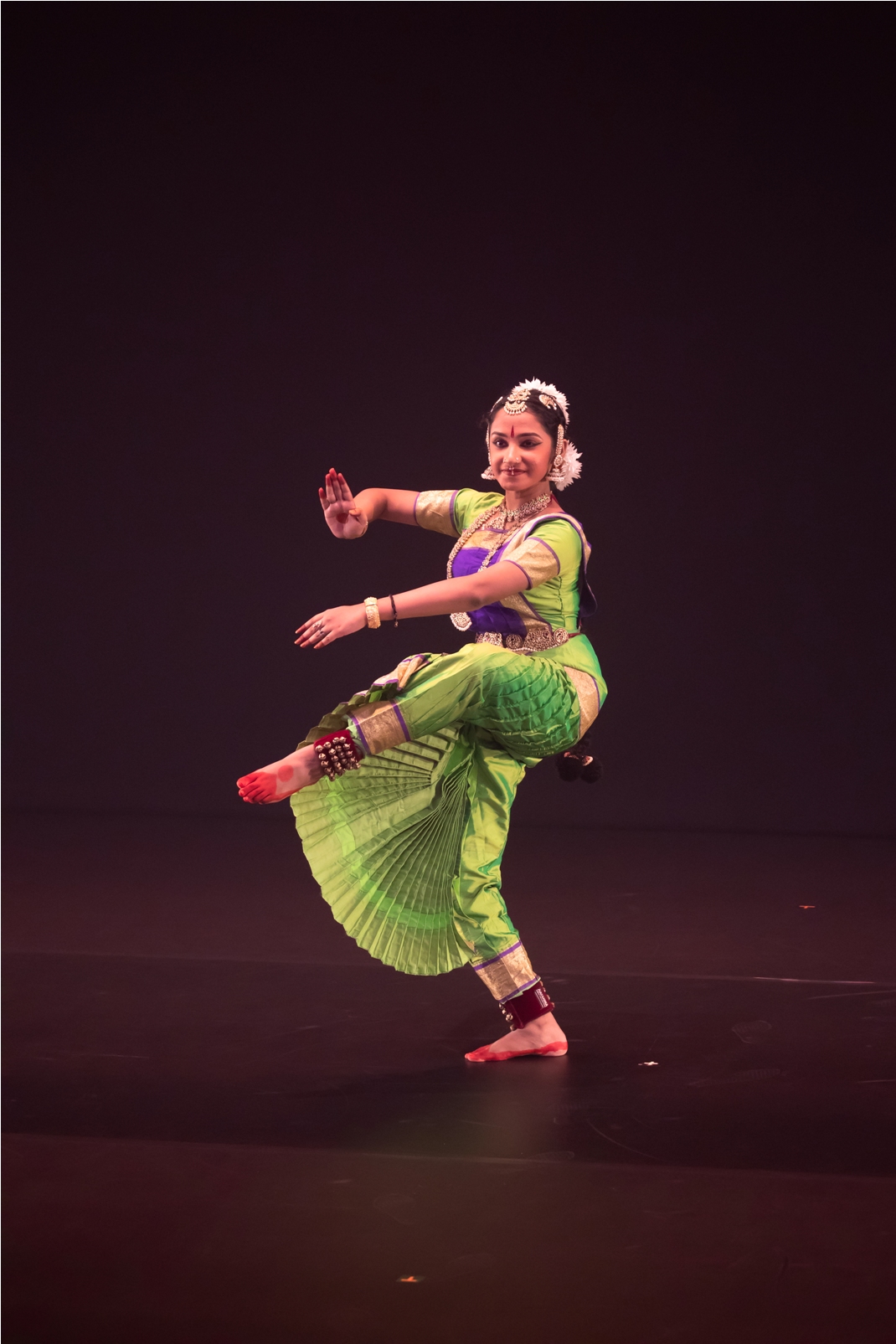 Devika's first piece was an invocatory shloka in praise of Lord Shiva. This was followed by the varnam, Veedarulum Pemmane. The varnam describes Lord Shiva mounted on the nandi, and the devotee seeks his blessings. It is set to ragam mohanam and talam adi, with lyrics by Dr S Raghuraman and choreography by Guru PN Vikas.

Aarya Kini is a senior kathak disciple of Guru Jyotika Joshi at SIFAS. Her kathak journey began when she was seven years old. After establishing a foundation in the dance form, she joined SIFAS in 2013 where she continued learning under Guru Jyotika Joshi.

At SIFAS, she has been the recipient of the Best Student Award in 2017. Aarya is also a first year BFA student at Parsons School of Design. 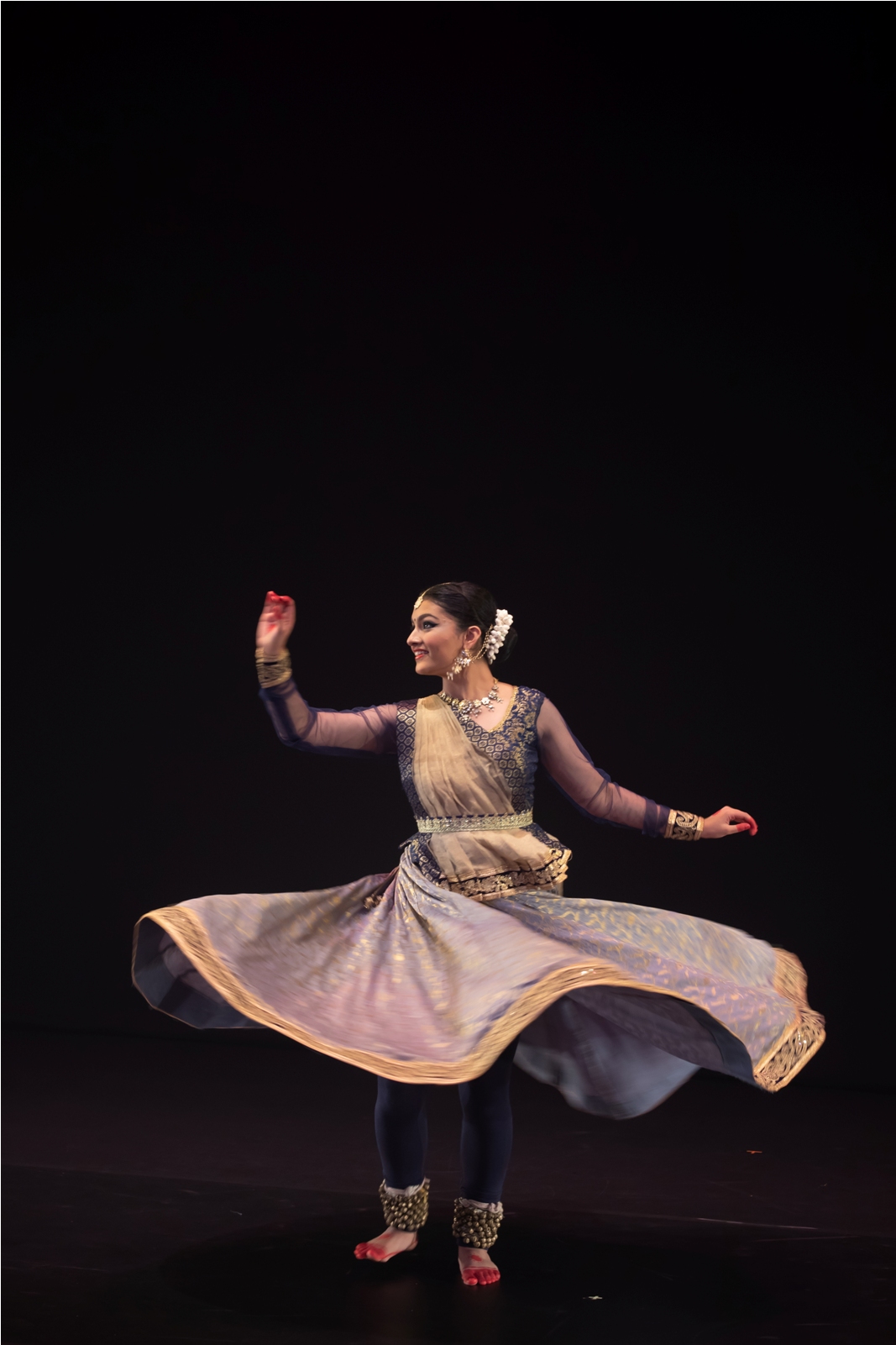 Thumri - A thumri is a hindustani classical composition that describes the disposition of a nayika (the female heroine). This thumri - set to Raag Mishra Pahadi and Taal Dadra - depicts the playful romance between Radha and Krishna, where she attempts to dissuade him from teasing her in front of the prying eyes of the public.

Tarana - A tarana consists of a set of meaningless bols derived from Persian phonemes that are consistently repeated throughout the piece. Set to Raag Puriyadhanshree and Taal Teentaal, this tarana is interspersed with compositions such as tukda, tihais, paran, aamad and chalan.