Kalaa Utsavam 2020’s theme of the Tree of Life invites audiences to find comfort in a series of live carnatic music and classical dance performances by Singapore's Indian arts community.

The dancers featured were selected as part of the Kalaa Utsavam Dance Stage LIVE open call.

Mridula completed her bharatanatyam diploma at the Singapore Indian Fine Arts Society (SIFAS) in 2018 and has over the years performed extensively at temples and school productions. 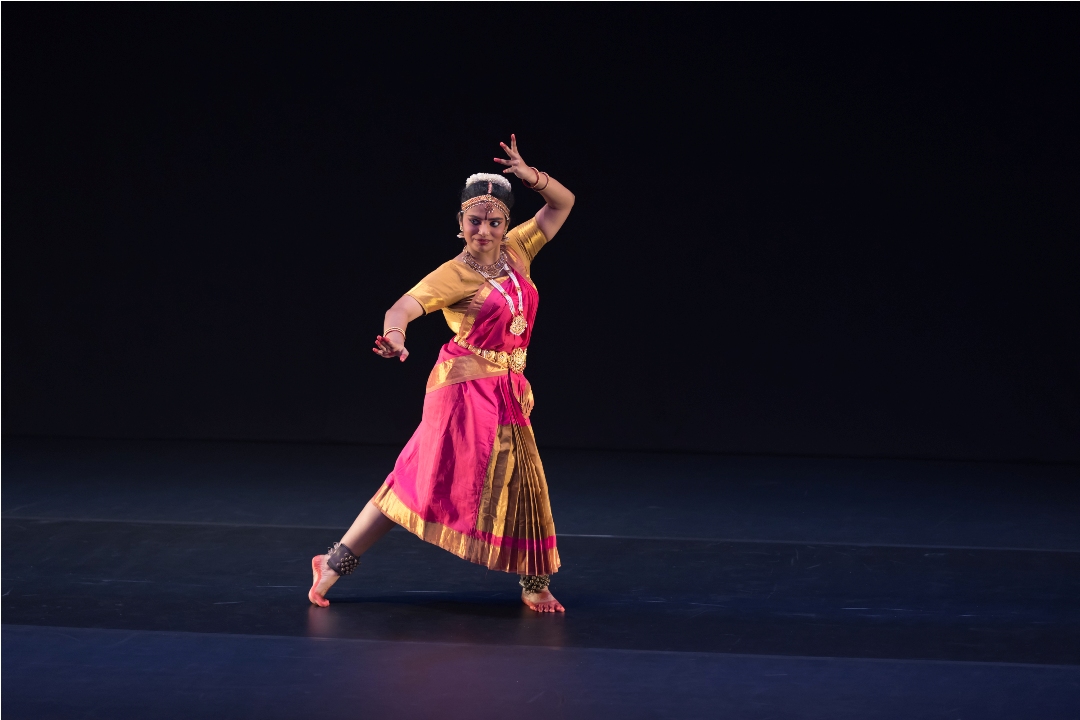 Tunga Tarange Gange - A piece that describes the river goddess Ganga’s beautiful descent from heaven and the majesty of her existence. It is based on stories such as the creation of Ganga by Vamana from the water that washed his lotus feet. Other episodes include her wrath as she flowed down the Himalayas, that neither of the deities anticipated, and which Lord Shiva observed and arrested her in his matted locks.

Murugan Thalattu - A soothing lullaby, this work is a depiction of a Mother pleading and lulling Lord Muruga to sleep by describing his beauty, antics and abilities.

Parvathy Varma is a Secondary Four student at NUS High School for Maths and Sciences and has been learning odissi at Chitrakala Arts, Singapore under the tutelage of Guru Chitra Shankar for the past eight years. Over the last few years, she has featured in solo and group performances in over 70 events across Singapore and India. 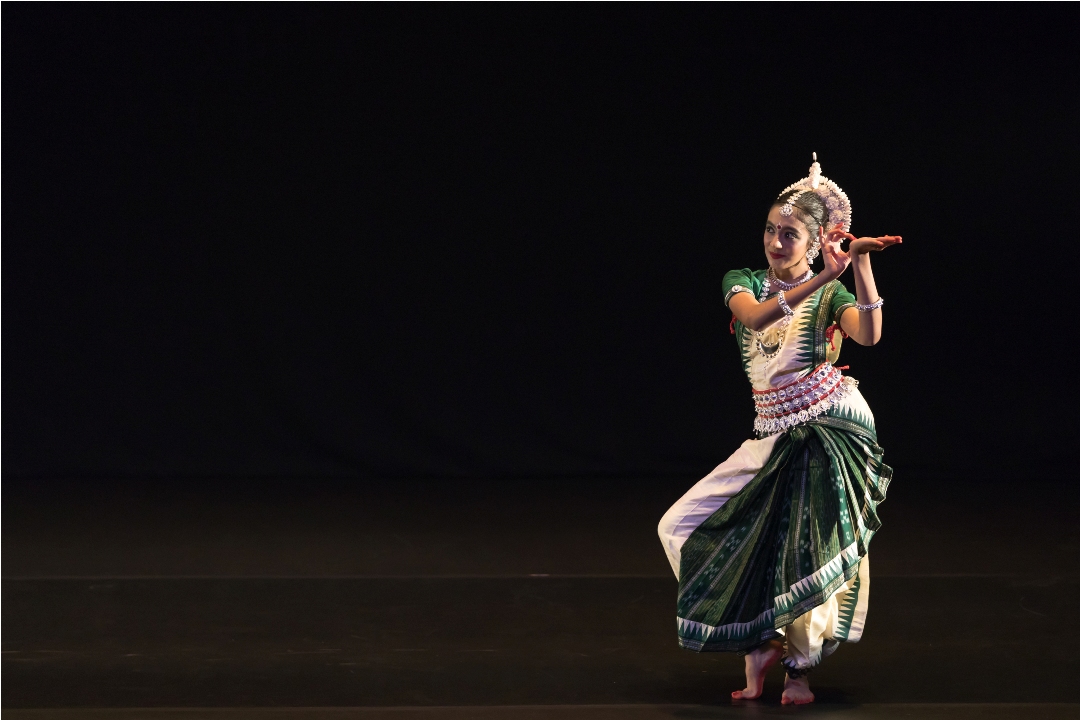 Chandana Charchita - An ashtapadi, composed by the famous poet Jayadeva. It is a depiction of the sakhis (friends) describing to Radha how Krishna in his yellow dhothi, adorned with flowers and chandan (sandalwood paste), is flirting and playing with the gopikas (Krishna’s friends).

Megh Pallavi - Odissi has two elements, the nritta and the nritya. The nritta is a pure dance focused on technique and posture, while nritya is expressed through a narrative. The Pallavi is a nritta. The lyrical movement of the dancer is supported by intricate rhythm patterns. Like the blossoming of a flower, the Pallavi starts with slow and graceful movements of the neck, torso and feet. The dancer traces complex patterns, gradually unfolding the particular raga (scale) upon which the music is based.

You can watch these performances on Facebook as well as Esplanade Offstage till December 20, 2020.

With both her grandmother and mother also dancers, Shreya Murthy showed a keen sense for the art from a very young age and started formally learning bharatanatyam from her mother. She later joined the Singapore Indian Fine Arts Society and recently completed her diploma and arangetram under the tutelage of Guru Shalini Gokul and was awarded with title Natya Visharad by her institution. 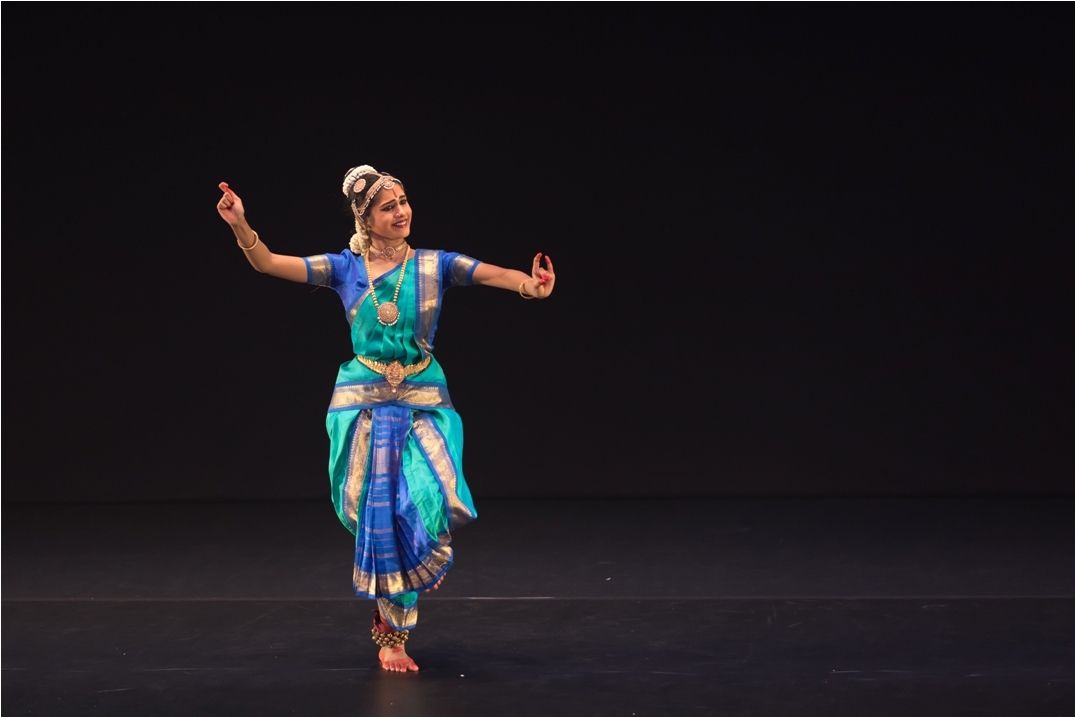 Shreya performed The Divine Cowherd - A composition by Rama Vaidyanathan which explores, in all its nuances, the mystical duality of Lord Krishna's persona on earth, the Divine Cowherd. On the one hand, he is a regular cowherd, relatable to the masses, while on the other, he is a divine avatar of Lord Vishnu the Protector. He commits to his tasks with great aplomb, and with the same hand that gathers the cows, blesses us all as Lord Vishnu. The verses are drawn from the legendary opera, the Sri Krishna Leela Tarangini, composed by the 17th-century Saint, Sri Narayana Teertha.

Avantika Menon has studied two different Indian classical dance forms - bharatanatyam since the age of four and mohiniyattam from 2012. She is a dancer with an exceptional command of rasas (emotions of dance) and bhavas (expressions in dance) along with appreciable footwork.

An undergraduate at the Nanyang Technological University in Singapore, she has trained under teachers such as Anjusha Varghese, Pramod Kumar and Neewin Hershall at Singapore’s Nrityalaya Aesthetics Society for bharatanatyam. She received her mohiniyattam training first under the tutelage of Jayashree Harikrishnan and later under the guidance of her guru, Vidushi Rubina Sudharman. 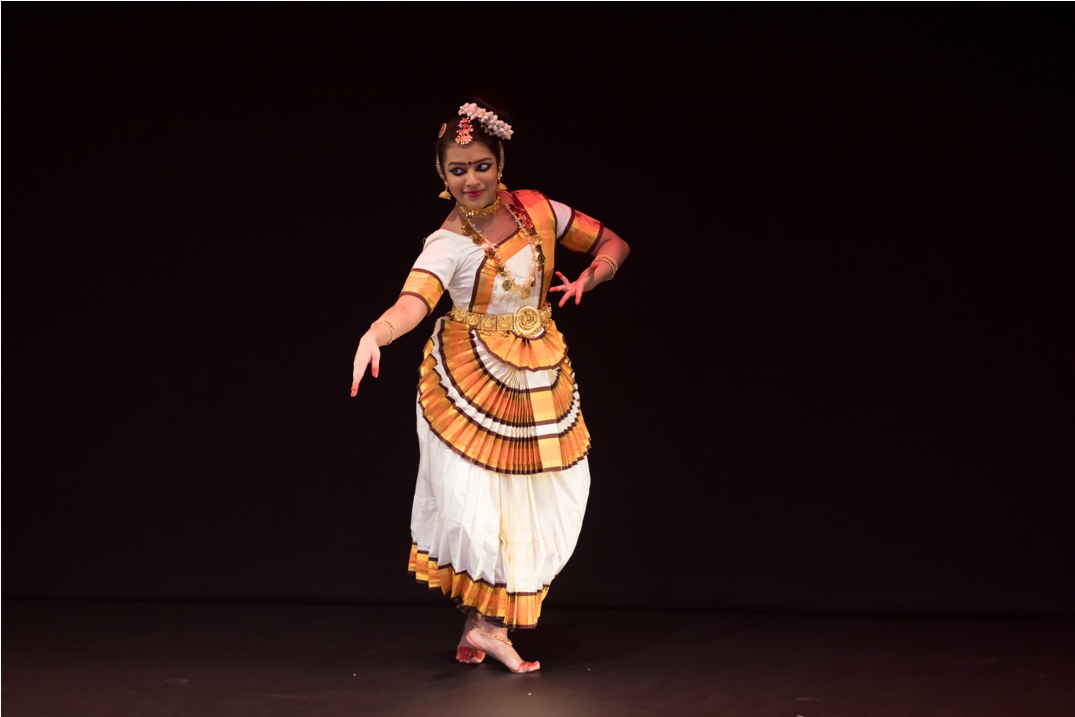 Avantika performed the Mohini Varnam - A dance piece showcasing Mohini in different forms, from Lord Vishnu as Mohini, who saves the Gods by giving them the nectar and defeating the demons, to Mohini’s killing of the Bhasmasura with her dance.

Kalyani Hema Nair is an alumni of SIFAS. She graduated with a diploma in 2015 at age 13 and is currently under the tutelage of guru Neha Mondal Chakravarty. She has participated in the SIFAS Festival of Indian Classical Music and Dance for six consecutive years. She was awarded first place for competitions such as Bharatham, Papanasam Sivan and Dance Planet, and has performed in productions such as Shivadasi Chauladevi presented by Esplanade. 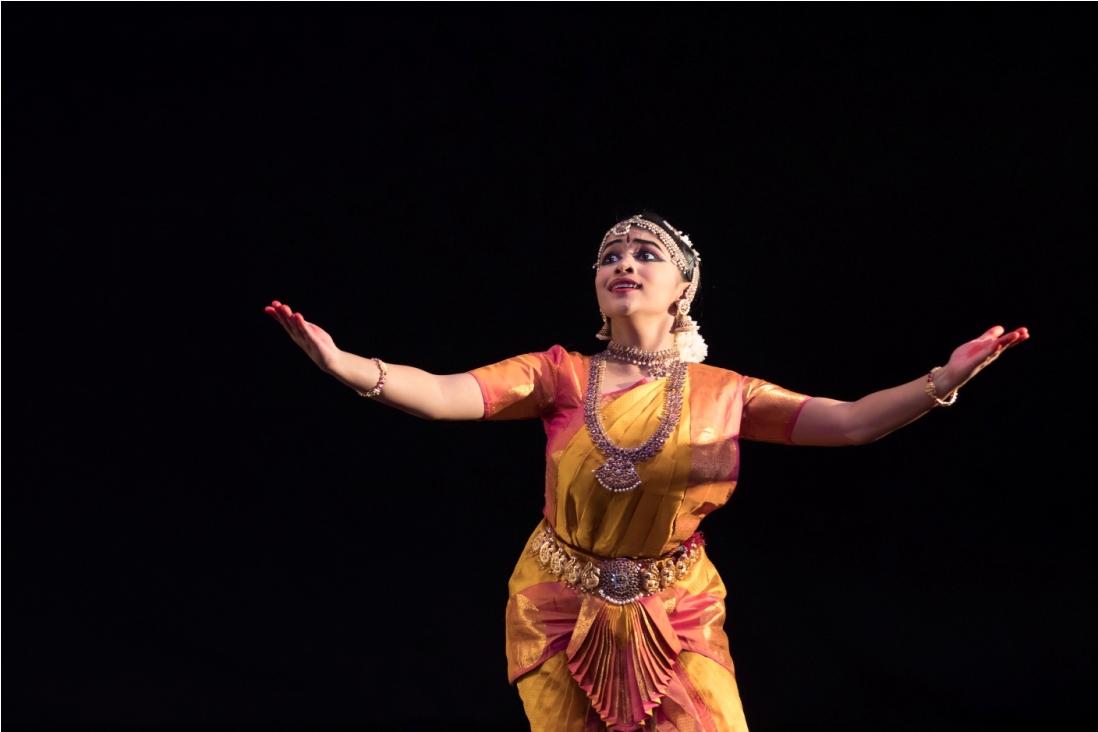 Kalyani performed Ganapathi Smaranam - Parvathy's face blooms seeing Ganesha, like a lotus blooms seeing the sun. The numerous wishes of the devotees are granted by the single tusked Ganesha. A performance on the ethereal joy experienced by devotees and the ecstatic prayer offerings that follow.

Saanika is an eighth year kathak  dancer  under the guidance of guru Jyotika Joshi at the Singapore Indian Fine Arts Society. She started to learn kathak at an age of five, has been a passionate dancer  and participating in several events and solo performances. 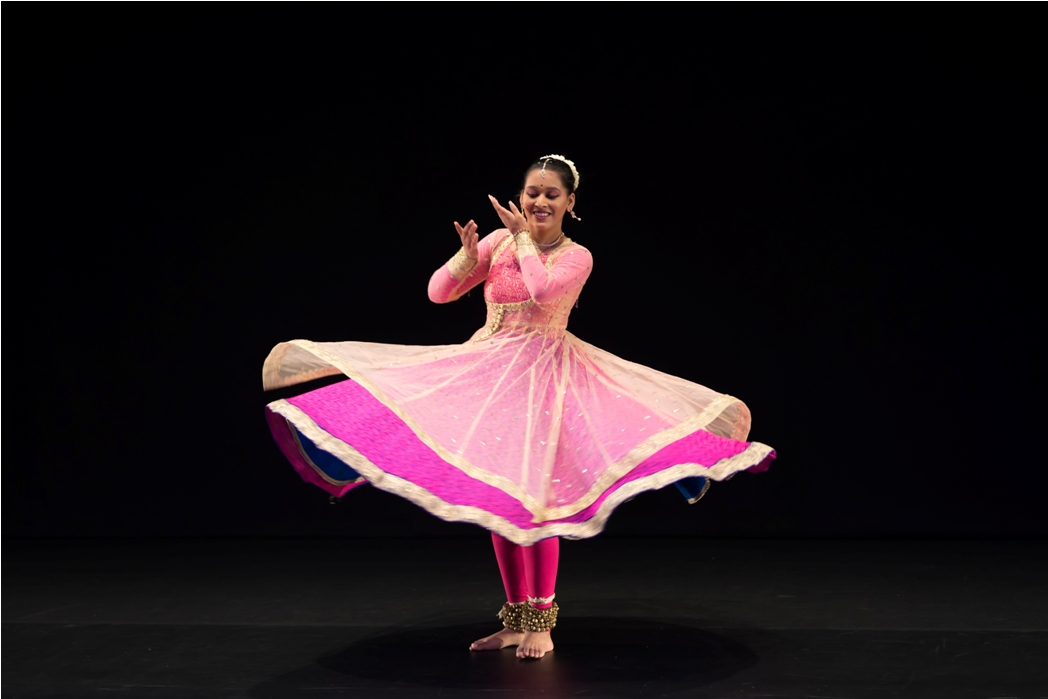 Saanika started to learn kathak at an age of five. Photo courtesy: Esplanade

She also performed Krishna Ashtapadi - Nachat Sudang, a composition dedicated to the story of Radha, depicts the famous story where Krishna teases Radha while she goes to fill up her water pot.

Preethi Devarajan started learning bharatanatyam at the age of six at SIFAS and completed her Diploma course in 2012. She completed her arangetram in 2012 under Guru Roopika Julian. She has since performed at numerous SIFAS festivals both in Singapore and abroad, including Pravaha (2014) at Esplanade. 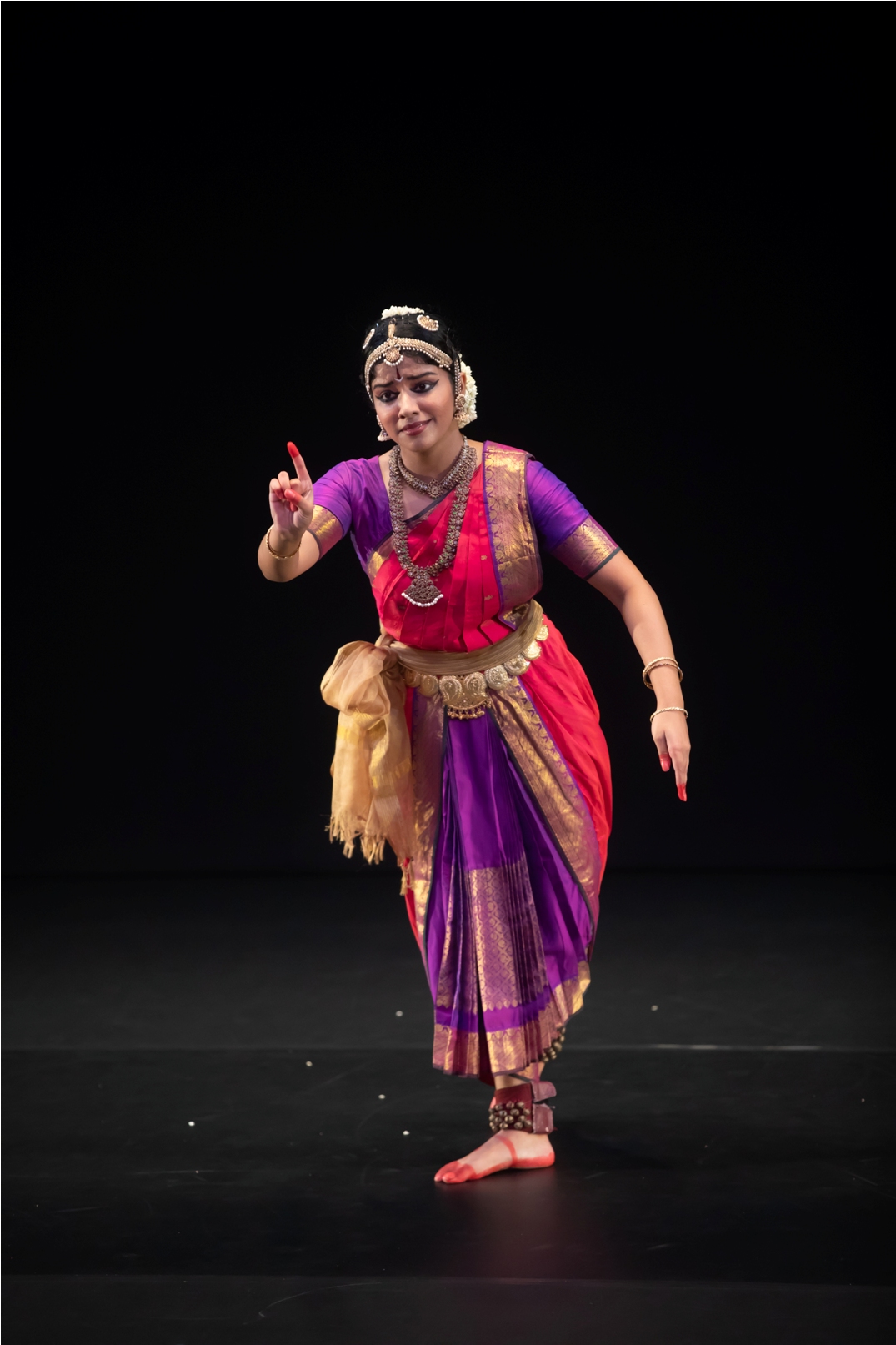 Charusheele - In this 19th ashtapadhi of poet Jayadeva, Krishna tries to cajole Radha who is angry with him, displaying his love, longing and passion for her. In Preethi’s rendition of the ashtapadhi however, Krishna does not speak directly to Radha but instead to his flute as though it is Radha.

In 2018, she performed for the India International Dance Festival in Bhubaneswar and in Vietnam for the Singapore National Day Celebrations. In 2019, she performed at the Dasyam Festival, Chennai and Rasika Ranjani Sabha, Chennai. 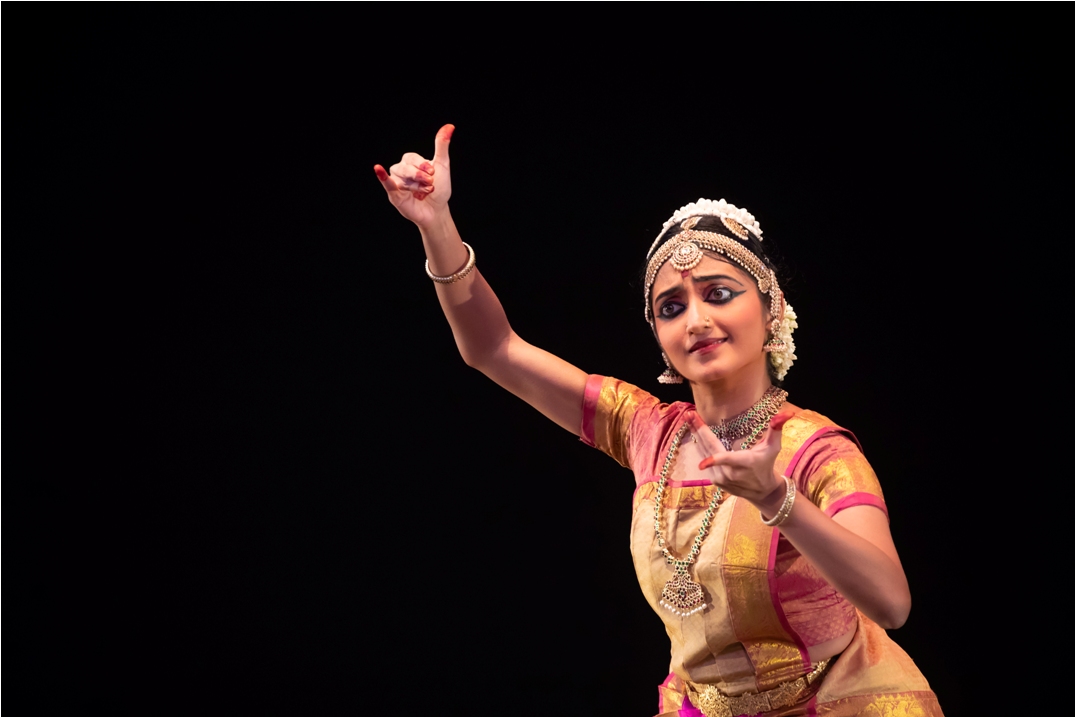 Hari Hara Sthuthi - “Oh Lord of Arya, Lord Vishnu had taken various forms. He became your arrow and bull, occupying half of your body, transformed to be your wife, a boar, a lady friend and drum player. He too offered his eye in worship at your feet... Who else is greater than him?” This composition includes verses from Sivananda Lahari of Adi Sankaracharya.

Periyachi Roshini started learning bharatanatyam from age five and is currently at LASALLE College of the Arts undertaking her Diploma in Performance. She started her dance journey under the tutelage of Guru Neewin Hershall from Bhaskar's Arts Academy and in 2017, completed her bharatanatyam diploma.

At SIFAS, she is taught by Guru Geethanadhan PK. Since 2019, she has been a company dancer at Apsaras Arts. She has performed in the SIFAS Festival of Music and Dance - Kalavaibhavam, Anjaneyam by Apsaras Arts for the Singapore Night Festival 2019 and at Kalaa Utsavam 2019 for Kathakali by Kalakshetra Repertory (India). 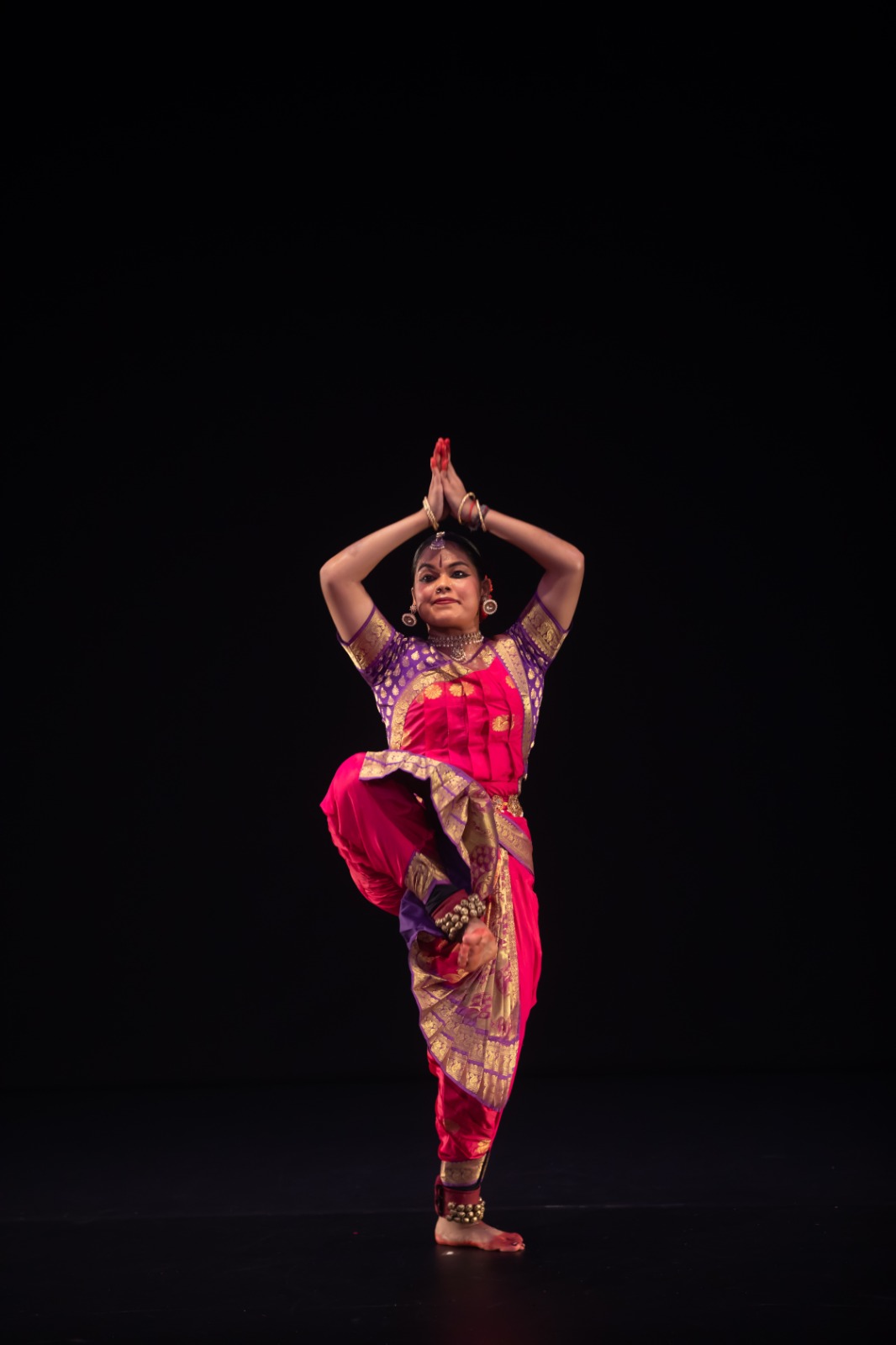 Periyachi Roshini started learning bharatanatyam from age five and is currently at LASALLE College of the Arts undertaking her Diploma in Performance. Photo courtesy: Esplanade

Periyachi Roshini performed Perum Kovil - a piece that celebrates the architectural brilliance of the Tanjavur Periya Kovil, also known as the big temple. A keertanam composed by the Tanjore Quartet, it is set in Shree ragam and Adi talam and choreographed by Rama Vaidyanathan.

One unique feature of this keertanam is that the devotee is an artist. As she enters the beautiful Brihadeeswarar Temple, she admires the quadrangle courtyard, its pillars carved with wondrous karana sculptures, and adapts their forms into her dance. The temple is a sacred space for learning, and the work an invocation of wisdom and humility in art-making.

Thulasi Sharma is a senior dance student at the Temple of Fine Arts (TFA). She has been learning bharatanatyam for 16 years and kathak for seven years under the tutelage of guru Sujatha Rajagopalan. She has participated in various stage productions and temple programs with TFA. In 2019, she completed her bharatanatya arangetram, and recently started learning nattuvangam under the guidance of guru Lakshmi Krishnan. 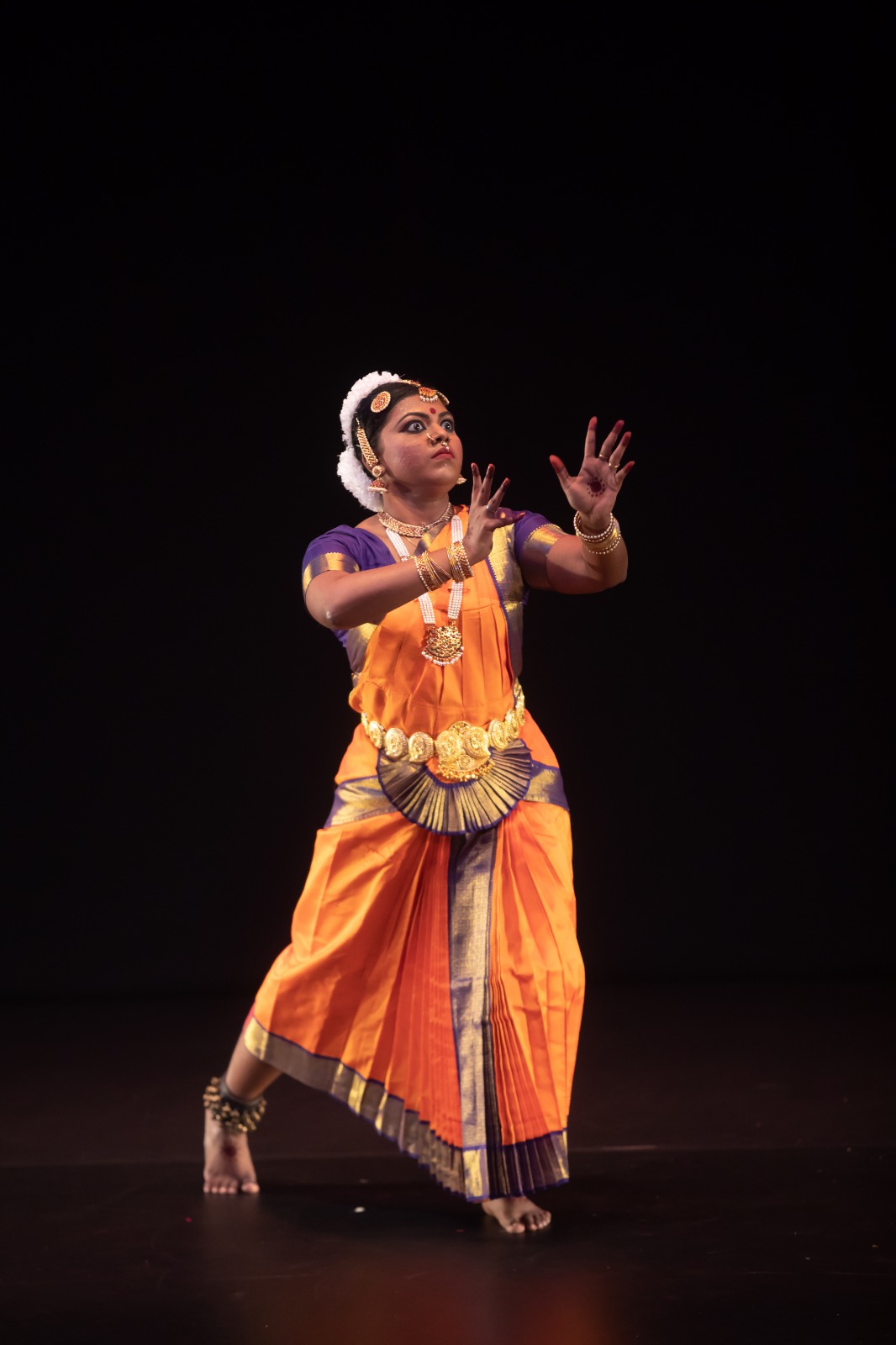 Thulasi Sharma has been learning bharatanatyam for 16 years and kathak for seven years. Photo courtesy: Esplanade

Shiva Shakthi Alaripu - In this piece, Shiva’s energetic Thandava and Shakti’s Lasya movements have been juxtaposed to the usual sequence of an alaripu. The opposing attributes of masculinity and femininity come together to create balance and equality. This piece is set to Tisra Jathi Dhruva taalam and raagam Shivashakti.

Omkaari (Padam) - The dancer sees the divine mother in her various manifestations and fervently seeks her blessings in this work. Evoking goddess Kali’s battle against the demons, she pleads with the goddess to free her from the demons in her mind.