The art of Yoga, 'India's gift to the world', celebrated across the globe on IDY

Highlighting the huge cultural and health impact the art of Yoga has had around the world, people from all walks of life joined together in the past week to celebrate the Fourth International Day of Yoga (IDY) 2018. 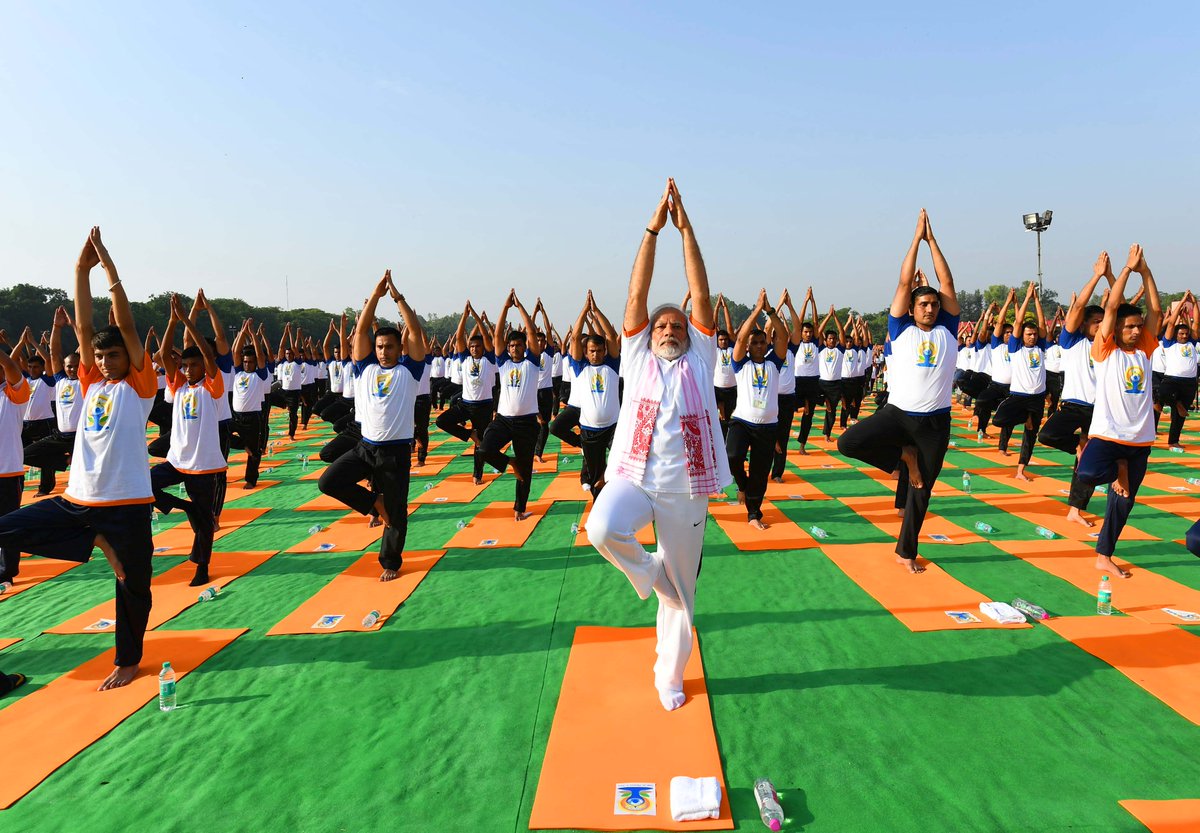 From Singapore to San Francisco, and everywhere in between, asanas was the watchword of the week as everyone grabbed their yoga mats and carried out yoga sessions to salute the ancient Indian art.

“Dehradun se Dublin tak, Shanghai se Chicago tak, Jakarta se Johannesburg tak, Yoga hi Yoga hai (From Dehradun to Dublin, Shanghai to Chicago, Jakarta to Johannesburg, there is Yoga all around). Yoga has become one of the unifying forces of the world,” said Indian Prime Minister Narendra Modi who celebrated his Yoga Day in Dehradun.

Let’s take a look at some of the celebrations held around the globe on the occasion.

The High Commission of India, Singapore in association with several organisations, educational institutions, yoga centres, clubs and local associations has organised a host of activities around the 4th UN International Day of Yoga. Yoga enthusiasts in the Lion City can pick and choose their yoga bliss from June 16 to 24 across more than 50 locations/venues in Singapore. 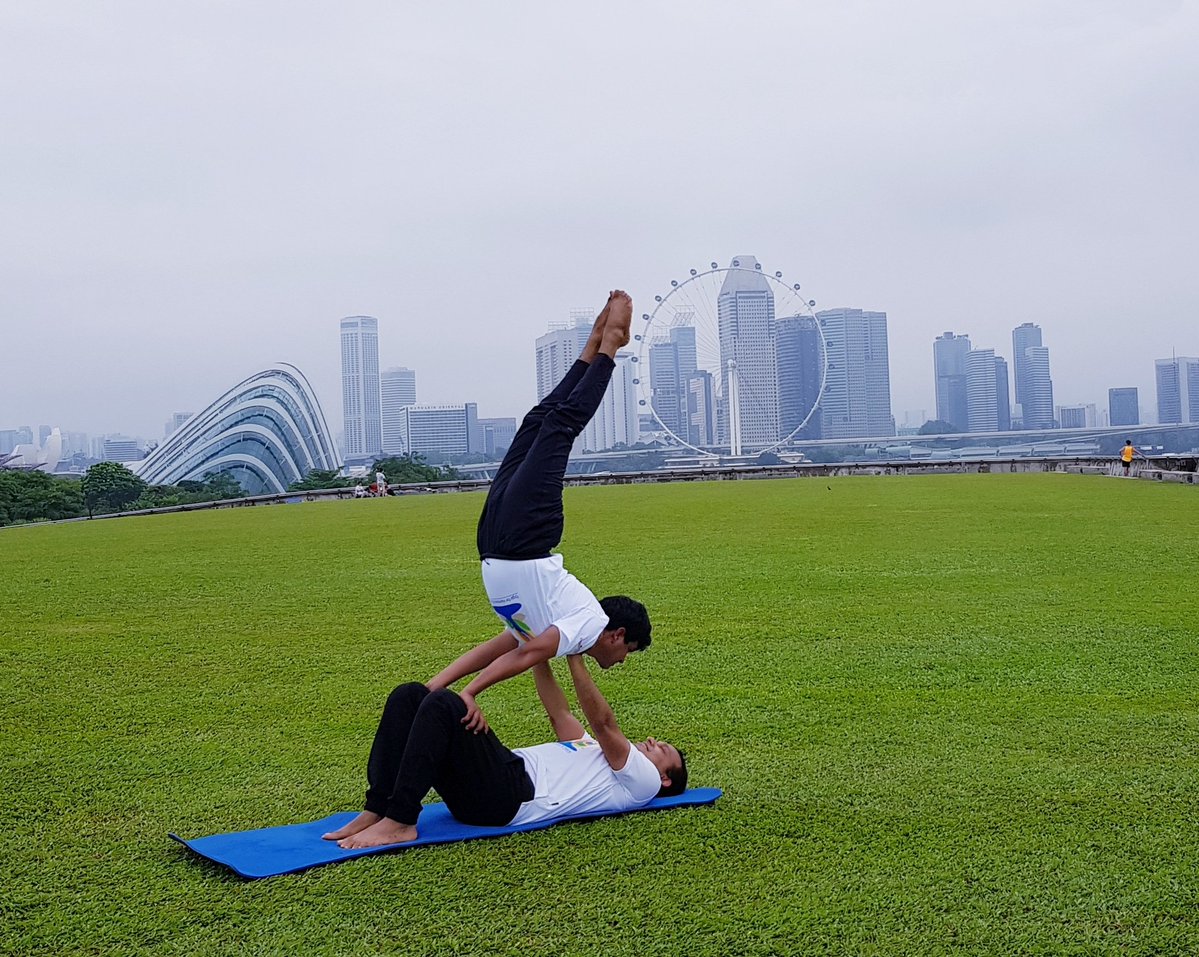 Over 170 yoga sessions were organised across Singapore from June 16 to 24 to mark IDY 2018. Photo courtesy: Twitter/@kuldeepyogi86

#Yoga for mind, body and soul! Glimpses from the picturesque Marina Barrage in #Singapore. Many such sessions this weekend; 100 events and 170 sessions till 24 June 2018. #IDYSG2018 #IDY2018 pic.twitter.com/VSGugSHMKF

All the centres are free and open to the public. Click here for a list of venues.

“Peoples’ Association, ActiveSG and SportSG, Narpani, Art of Living, Isha Foundation, Vyasa Yoga, Sahaja Yoga, Jal Yoga, Indian banks such as State Bank of India, schools such as the Global Indian International Schools, corporates such as Himalaya, GMR, Tata Group of companies, and Reliance, and many local associations have joined with the High Commission to make the 4th IDY a success in Singapore,” the high commission said in a statement.

Over 1000 yoga enthusiasts took part in the #IDY2018 celebrations at Batu Caves, organised by Indian High Commission in partnership with Annamalai University and several local partners. Former Senator and Deputy Foreign Minister A. Kohilan Pillay was among dignitaries present. pic.twitter.com/KWcVjQtnZK

The High Commission of India flagged off International Day of Yoga 2018, with Girija Sinha, the wife of the High Commissioner of India, UK, heading a mindfulness and wellness session organised by Indian Young Professionals Network at India House on June 7. The session began with a flute recital by Gaurav Uniyal, and was followed by a salad making session by Sujata Din, noted health coach. A Yoga session was also organised at the British heritage site of Stonehenge. 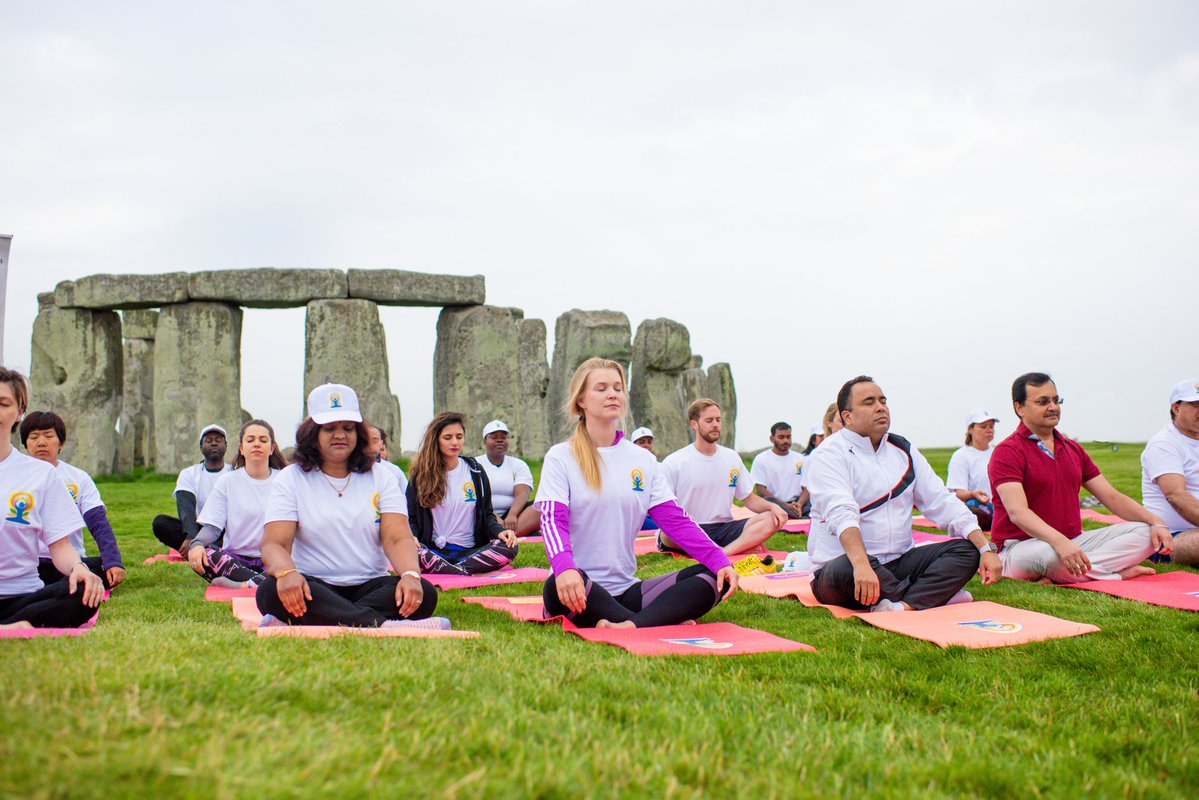 Yoga enthusiasts  gathered at historic monuments of the US, including the Capitol Hill, kick-starting a host of events planned this week to mark the fourth anniversary of the IDY.

In New York, people gathered at the Governors Island in the backdrop of the iconic Statue of Liberty and the Manhattan skyline to participate in the Yoga Day celebration organised by the Consulate General of India.

The two-hour event 'Let Yoga Govern Your Life' organised yesterday by the Consulate General of India in New York, included meditation and a guided yoga session based on 'Common Yoga Protocol' conducted with the help of yoga demonstrators and teachers.

#InternationalYogaDay2018 at @UN Building, New York. Yoga Enthusiastic from all over the world cheer up the moment with Yoga Gurus and exponents. @AkbaruddinIndia @narendramodi #YogaDay pic.twitter.com/8ldZzeNmGR

Addressing the gathering, Congresswoman Carolyn Maloney, the Chief Guest for the event, said yoga is a "unique way" to approach an individual's health and well-being.

"Practicing yoga has been shown to decrease stress, fatigue, and alleviate chronic pains, as well as improving physical fitness. I know first-hand the benefits of practicing yoga. It is an essential part of my life, I practice it as often as I can, and it helps me to find balance and peace," she added.

India's Consul General in New York Ambassador Sandeep Chakravorty highlighted yoga's universal appeal and the role of the ancient Indian practice in bringing together the cultures and people of America and India. 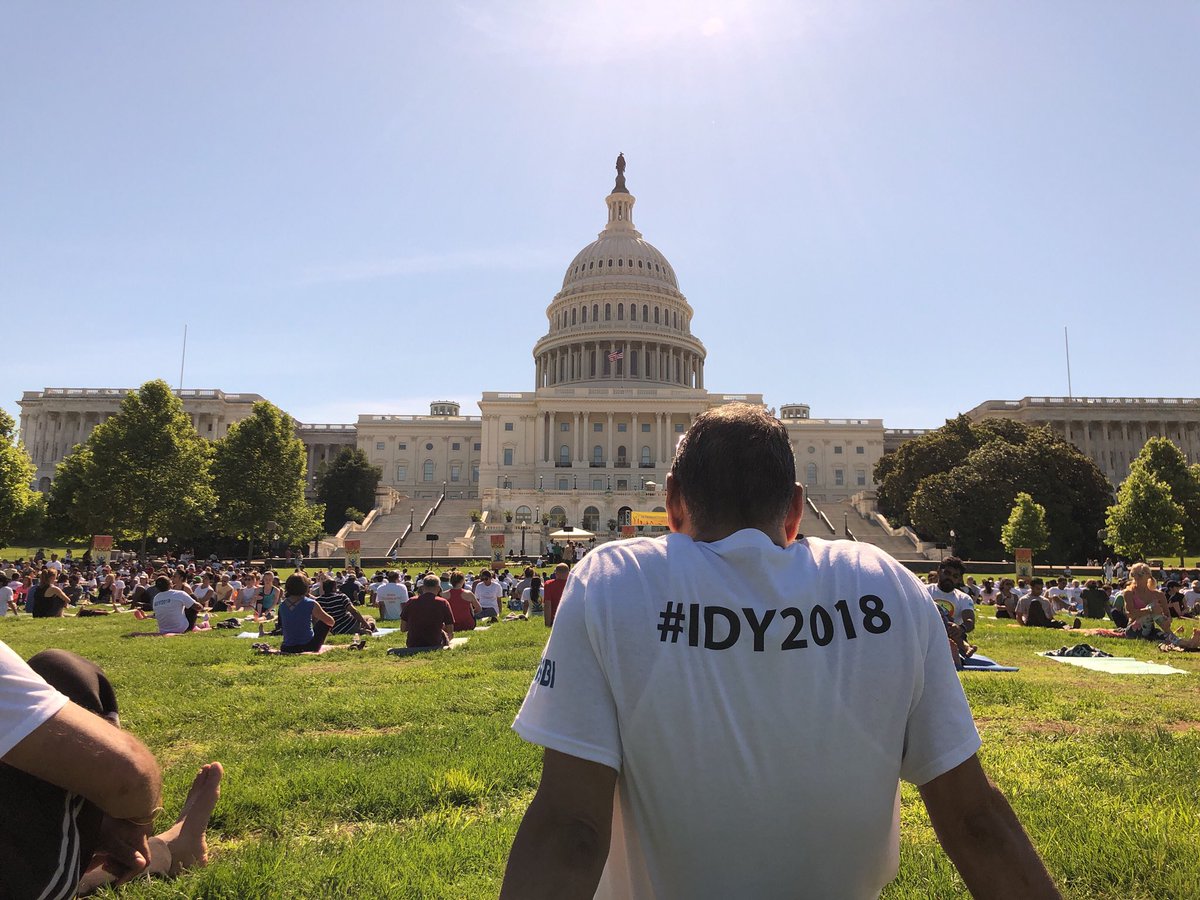 Capitol Hill in Washington was the site of the yoga session for IDY 2018. Photo courtesy: Twitter/@abhisuryawanshi

In Washington, hundreds of health enthusiasts gathered at the iconic US Capitol Saturday morning to flex their body under the guidance of a trained Indian yoga teacher.

This venue at the Capitol Hill where Presidential swearing in ceremonies are held every four years, this morning experienced one of the largest gatherings of yoga exercises in Washington DC.

"It shows that huge enthusiasm that yoga has gathered among all of us and all over the world,"  Indian Ambassador to the US Navtej Singh Sarna said in his brief remarks to the participants who had gathered since early morning with their yoga mats at the Capitol overlooking the National Mall.

Indian Prime Minister Narendra Modi personally led a gathering of 50,000 in a morning yoga routine in Dehradun, while a world record 1 lakh people gathered in Rajasthan under the tutelage of Yoga Guru Ramdev.

Addressing the gathering on the occasion, PM Modi said, "In today's fast changing time, Yoga binds together a person's body, brain and soul, hence making one experience a feeling of peace. Dehradun se Dublin tak, Shanghai se Chicago tak, Jakarta se Johannesburg tak, Yoga hi Yoga hai (From Dehradun to Dublin, Shanghai to Chicago, Jakarta to Johannesburg, there is Yoga all around). Yoga has become one of the unifying forces of the world."

Emphasising on the power of yoga and its global reach, Prime Minister Modi said, "Yoga is India's gift to the world. It is a passport for wellness. The world has embraced Yoga and glimpses of this can be seen in the manner in which International Day of Yoga has been marked every year. In fact, Yoga Day has become one of the biggest mass movements in the quest for good health and well-being."

Following External Affairs Minister Sushma Swaraj’s four nation tour, she was the guest of honour at the yoga celebrations in the European Parliament today. Enthusiasts in Brussels joined the minister for the session led by Shri Shri Ravishankar in the presence of EP President Antonio Tajani.

Consul General Vipul and Dr. Abdulla Al Karam, Chairman of the Board of Directors & Director General of the Knowledge & Human Development Authority (KHDA), UAE participate with parents & children of the Indian International School in Dubai to celebrate 4th #InternationalYogaDay pic.twitter.com/ozA885efXB

The first International Day of Yoga was observed all over the world on June 21, 2015, where more than 30,000 people, including Prime Minister Narendra Modi, performed yoga asanas (postures) at Rajpath in New Delhi.

The idea of International Day of Yoga was first proposed by Prime Minister Modi during his speech at the United Nations General Assembly (UNGA) on 27 September 2014.