Hosts New Zealand got their first win in the series against India at Seddon Park in Hamilton on Wednesday with a perfectly-paced chase against India in the first ODI, reaching the target of 348 with 11 balls to spare. 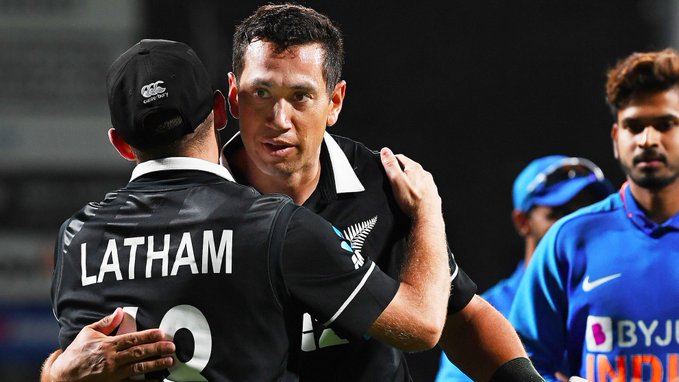 The Kiwis were in cruise control through most of the match but did suffer a scare towards the end when they lost 3 wickets in the space of 4 overs. Photo courtesy: Twittter/@BLACKCAPS

The chase of 348 was the second-highest ever against India in ODI history as well as the Kiwis' highest successful chase, overtaking their success against Australia in 2007 chasing 346. This was the tenth highest chase of all time.

The foundations of the chase were the opening partnership between Martin Guptill (32) and Henry Nicholls (78) and the fourth-wicket stand of 138 between Ross Taylor (109 not out) and Tom Latham (69) in the middle overs, which provided a solid platform for the batsmen to build on.

The Kiwis were in cruise control through most of the match but did suffer a scare towards the end when they lost 3 wickets in the space of 4 overs, but Taylor kept a calm head to guide them home.

Earlier, sent into bat first, Shreyas Iyer (103 off 107 balls) scored his maiden ODI century for India, while KL Rahul (88 not out) and skipper Virat Kohli (51) ensured that India posted a competitive total. Prithvi Shaw (20) and Mayank Agarwal (32) opened the batting for the Men in Blue, replacing the injured Rohit Sharma and Shikhar Dhawan.

After facing a 5-0 whitewash in the T20I series, the Kiwis lead the three-match ODI competition 1-0 with the second match in the series to be played in Auckland on Saturday.