Sushma Swaraj: Will provide all assistance to family of Indian killed in Kansas 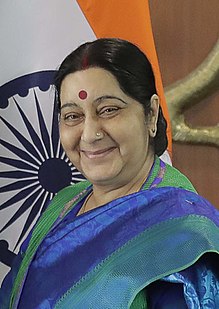 External Affairs Minister of India Sushma Swaraj today condoled the death of an Indian student during an attempted robbery in Kansas City in the US and assured all required assistance to the family of the deceased.

According to authorities in Kansas, Sharath Koppu, who hails from Telangana, was fatally shot during a suspected incident of robbery at a restaurant where he worked. He died shortly after being taken to a hospital on Friday.

Kansas incident - My heartfelt condolences to the bereaved family. We will follow this up with the Police and provide all assistance to the family. @IndiainChicago @IndianEmbassyUS⁩ ⁦@NavtejSarna⁩

"Kansas incident - My heartfelt condolences to the bereaved family. We will follow this up with the Police and provide all assistance to the family," Swaraj tweeted.

Koppu from Telangana was a software engineer who came to the US in January to pursue his master's degree.

"An Indian student became victim of shooting in Kansas City, Missouri. We r in contact with his family & police. We will provide all assistance. Our officers are also on the way to Kansas City (sic)," the Consulate General of India in Chicago tweeted yesterday.

The Kansas City Police announced a USD10,000 reward for information leading to the suspect and released a brief video of the suspect inside the restaurant moments before the shooting.