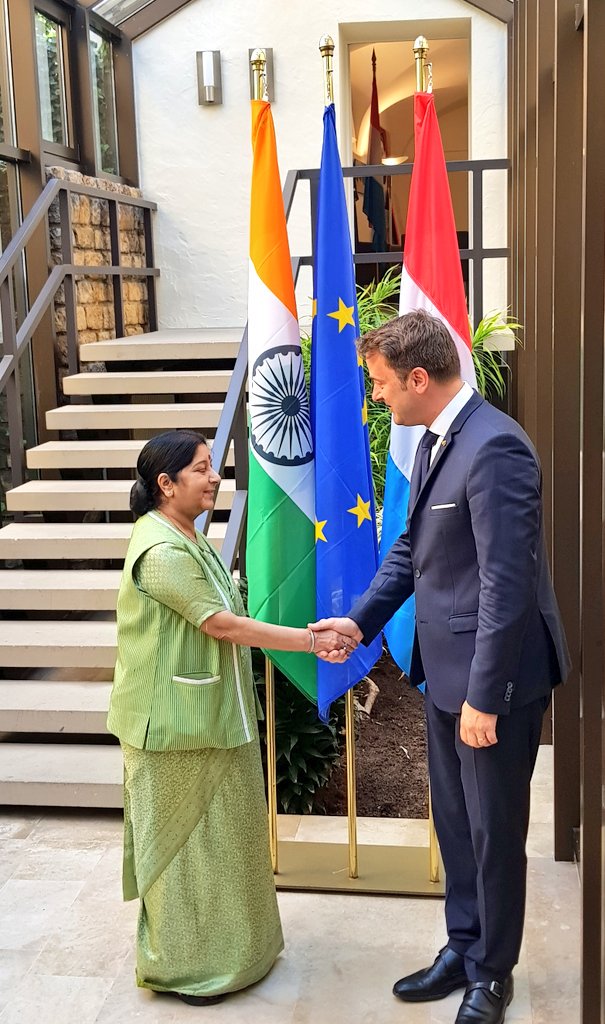 Swaraj, who arrived in Luxembourg on the third leg of her four-nation tour yesterday, became the first external affairs minister from India to visit the European country.

This is the minister's second multi-nation tour this year following a three-nation visit to ASEAN countries Thailand, Indonesia and Singapore in January. During her visit, Swaraj addressed the Indian diaspora at the ASEAN-India Pravasi Bharatiya Divas (PBD) in Singapore and reaffirmed India’s commitment to the ASEAN.

She also made a courtesy call on Grand Duke of Luxembourg Henri Albert Gabriel Felix Marie Guillaume and exchanged views to further strengthen 70 years old diplomatic relationship between India and Luxembourg, and impart an upward trajectory to our bilateral ties, Kumar said.

Swaraj then had a productive meeting with Minister of Foreign and European Affairs of Luxembourg Jean Asselborn.

India and Luxembourg are celebrating 70 years of establishment of their diplomatic relations.

On the last leg of her tour, Swaraj will visit Belgium from June 20-23. Her visit will coincide with the ongoing celebration of 70 years of India-Belgium Friendship as well the International Day of Yoga 2018. In Brussels, she will meet. Didier Reynders the Deputy Prime Minister and Minister of Foreign Affairs and European Affairs, for discussing India-Belgium bilateral cooperation.

In connection with IDY, the Minister will attend a special Yoga Session at the European Parliament tomorrow at the Yehudi Menuhin Space. Spiritual leader and Yoga Guru, Sri Sri Ravi Shankar, will be leading a meditation session on the occasion.

She will also attend a Reception being held in her honour at the Palais des Beaux-Arts (BOZAR), Brussels. A Violin Concert by Shri. Ambi Subramaniam and troupe will also be held on the occasion.  Belgian dance group, ‘Bollylicious’, will present Indian classical and folk performances.

Swaraj arrived in Luxembourg for a two-day visit from France where she met the top French leadership and addressed the Indian diaspora at a reception organised in her honour. Earlier, she had visited Italy on the first leg of her tour.