Overseas fans of late Bollywood actor Sushant Singh Rajput organised a car rally in the United States, calling for the truth about the actor's death to be revealed. 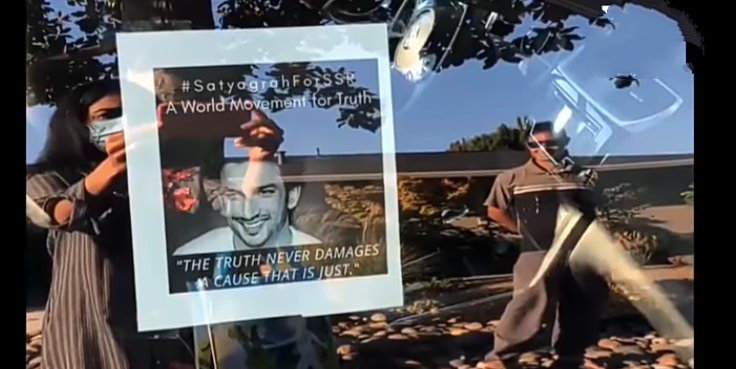 In the video, one can see cars passing around with posters, reading #SatyagrahforSSR A world movement for truth, stuck to the car windows." Photo courtesy: Twitter/@ImSanju_SS

Sushant's sister Shweta Singh Kirti, who lives in the US, shared a video of the rally on her social media accounts. "Car Rally in California, USA. We are calling it a world movement for truth and praying for truth to shine forth. #SatyagrahForSSR #Billboard4SSR," she wrote alongside the video.

In the video, one can see cars passing around with posters, reading #SatyagrahforSSR A world movement for truth, stuck to the car windows."

In another tweet, Shweta said: "Pray that God gives everyone the right mind, that the guilty confesses their guilts and redeem their souls #GlobalPrayers4SSR."

Car Rally in California, USA. We are calling it world movement for truth and praying for truth to shine forth. #SatyagrahForSSR #Billboard4SSR pic.twitter.com/YnLmpUJuzF

Shweta had earlier thanked god for the arrest of Showik Chakraborty, the brother of Sushant's girlfriend Rhea Chakraborty, along with his house manager Samuel Miranda as part of the probe into Sushant's death.

She had also received a certificate from the California State Assembly last month honouring Sushant on the occasion of Indian Independence Day.