Student protests against the contentious Citizenship (Amendment) Act (CAA) passed by the BJP government in India crossed the nation’s borders with students from universities in the US, UK, and Nepal protesting against the amendment. 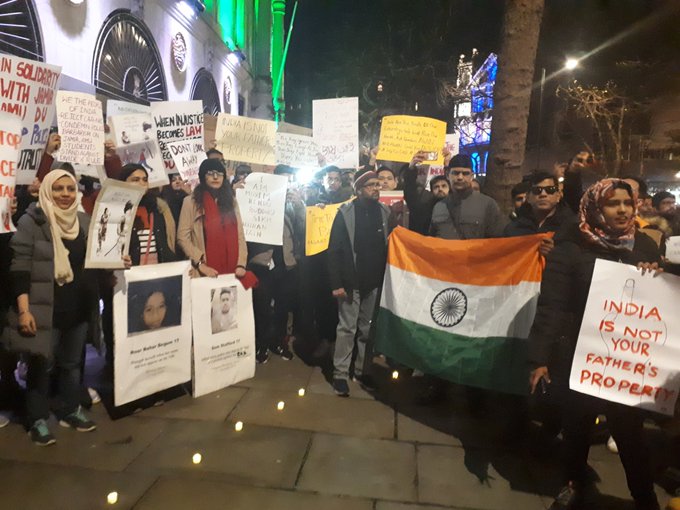 Hundreds of students and representatives from diaspora and workers’ groups gathered outside the Indian High Commission in London on Wednesday to protest, organised by the India Society of the School of Oriental and African Studies (SOAS) and supported by other universities, including the London School of Economics (LSE).

Earlier in the week, the India Society of the University of Oxford staged a protest march to India House in London against the Act and the police action on students in India on Sunday.

Around 400 students belonging to the Indian diaspora from universities in the US, including more than 100 students of Harvard University, have written an open letter to the government condemning Sunday's clashes and also voicing concerns on the new Citizenship law.

Harvard, Yale, Columbia, Stanford and Tufts students said they condemn the "brutal police violence unleashed against students at Jamia and AMU as a gross violation of human rights under the Constitution of India and international human rights law".

Several protests - some peaceful, some violent - erupted across India on Monday against the police crackdown in Jamia Millia Islamia in Delhi and the controversial citizenship law.

Can snow and freezing rain stop us? .. NO.
Harvard student protests against CAA and NRC ..#IndiansAgainstCAB pic.twitter.com/JpWKtqmD77

According to the Citizenship Amendment Act (CAA), members of Hindu, Sikh, Buddhist, Jain, Parsi and Christian communities who have come from Pakistan, Bangladesh and Afghanistan till December 31, 2014 following religious persecution there will get Indian citizenship.

The Indian High Commission in London has circulated a ‘Frequently Asked Questions (FAQs) on Citizenship (Amendment) Act 2019’ document, addressing aspects of the new act, in an attempt to forestall further unrest.

“There has been a misinformation campaign. The CAA does not affect any Indian citizen, including Muslim citizens,” noted the government clarification.