Sri Lanka produced a dominant performance to defeat Pakistan by 23 runs in the Asia Cup 2022 final on Sunday. Bhanuka Rajapaksa (71*) and Wanindu Hasaranga (3/27) were the stars of the night for Sri Lanka as they lifted a sixth continental title in Dubai. 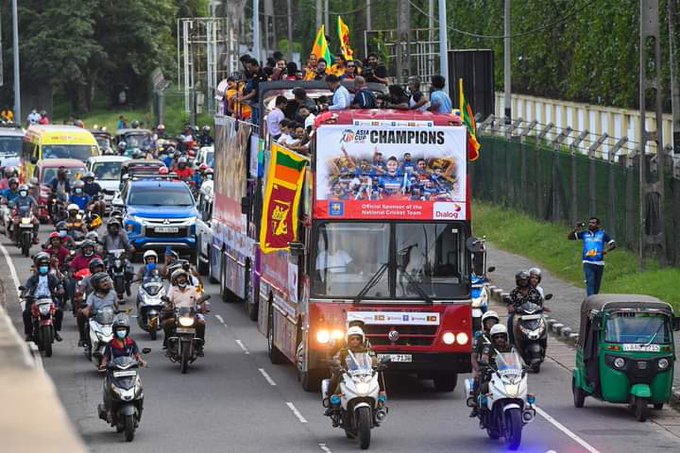 This was Sri Lanka's sixth continental title, inching closer to India, the most successful team in the Asia Cup with seven titles to their name. Photo courtesy: Twitter/@Jamz5251

Being invited to bat, the Sri Lankans posted a strong score of 170/6 in 20 overs and Pakistan, despite a strong 71-run partnership for the third wicket, gave the momentum away in the final few overs as they were bowled out on 147 in a massive batting collapse.

This was Sri Lanka's sixth continental title, inching closer to India, the most successful team in the Asia Cup with seven titles to their name. Additionally, this is Sri Lanka's first Asia Cup title in the T20 format.

After asking Sri Lanka to bat first, Pakistan made a blistering start as Naseem Shah dismissed the in-form Kusal Mendis in the first over of the match, but Rajapaksa, along with Dhananjaya de Silva (28) and Wanindu Hasaranga (36) made efficient contributions to take the Lankans to a strong score in Dubai.

For Pakistan, captain Babar Azam failed again as he was dismissed on 5 off 6 balls, and even as Mohammad Rizwan (55) forged a 71-run stand with Iftikhar Ahmed (32), the men in green failed to build on the same as no player from positions 5-11 barring Haris Rauf (13) could cross double figures.

Hasaranga shined with the ball too, as he picked three wickets while conceding 27 runs in his four overs; however, Pramod Madushan, who had made his T20I debut in only Sri Lanka's previous game against the same opponents in the Asia Cup, took four wickets including that of Babar Azam to become the leading wicket-taker in the Lankan lineup. Chamika Karunaratne also ended with two wickets to his name while Maheesh Theekshana was economical in his four overs, returning figures of 1/25.