Anjaneyam, Hanuman’s version of Ramayana was staged in the most spectacular fashion, a show conceptualised by Singapore’s dance company Apsaras Arts at the Kalaa Utsavam 2017.

Talking to Connected to India, Aravinth Kumarasamy, Creative Head & Managing Director, Apsaras Arts, said, “It all came together very well. We went all out with Anjaneyam to deliver a large-scale production deploying latest technologies to make the show look engaging. Imposing set and surroundings could have overwhelmed the cast, but they were able to emerge out of the surroundings and delivered a breathtaking performance.”

52 dancers, 21 musicians including Sai Shravanam from India, winner of a Sound Design Oscar for 20th Century Fox movie ‘Life of Pi’, came together for the two and half hour long show.

Here are some shots taken during the mesmerising show, which included artists from the Era Dance Theatre (Singapore), Kalakshetra Repertory Theatre (India) and the Bimo Dance Theatre (Indonesia); 80 percent of the performing artists were locals. 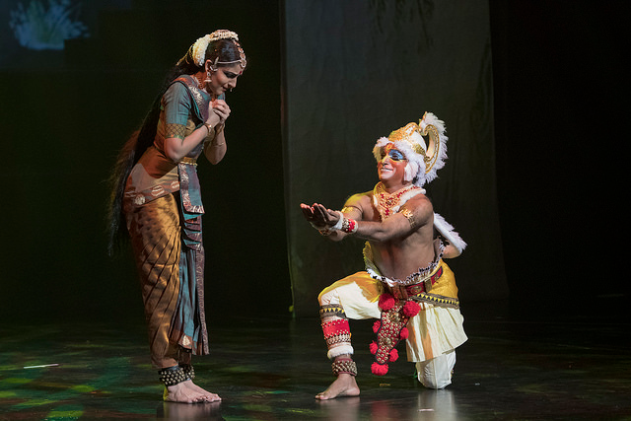 Anjaneyam's Ramayana unfolds the epic from the perspective of Hanuman. Here, the monkey god is seen showing Rama's signet ring to Sita at the Ashoka Vatika convincing her that Lord Ram will soon come to rescue her from the clutches of demon king Ravana. Renowned Bharatnatyam dancer from India Lavanya Ananth effectively showcases the character of Sita going to the tribulations through her dance form. The role of Hanuman has been essayed by famous dancing exponent Haripadam from Kalakshetra Repertory Theatre of India. Photo: IndieStrings 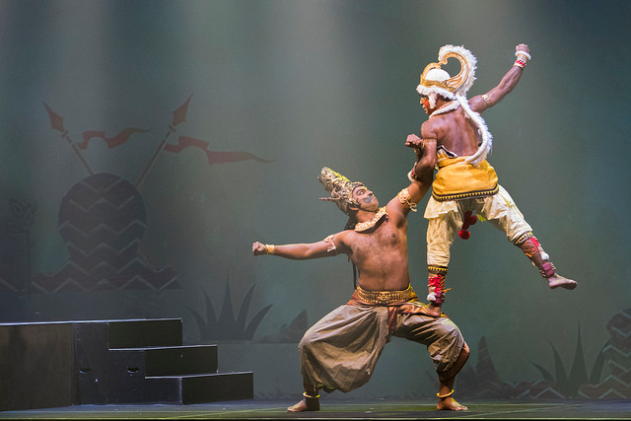 The infinite power of Hanuman is showcased as he charges on Ravana's son Meghnadha and ultimately overpowers him. The fight is ensued as Lord Rama goes to Lanka to rescue Sita from the clutches of demon king Ravana. Photo: Connected to India 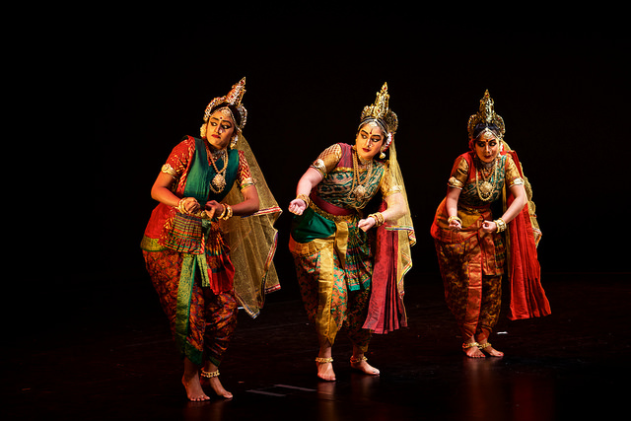 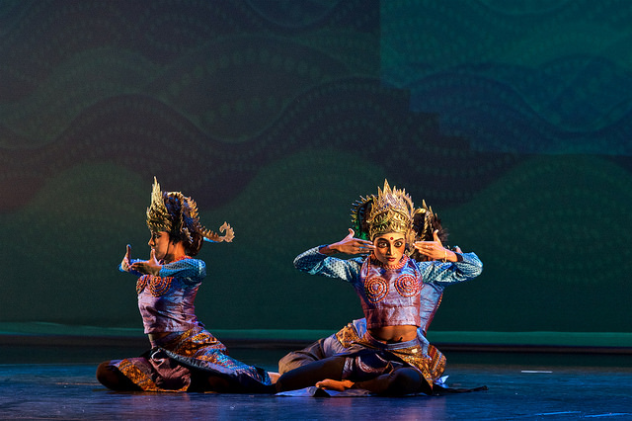 Sea monster Suarasa emerging from the water to swallow Hanuman as he was flying over the ocean on his way to Sri Lanka. To escape the clutches of the fierce water serpent Suarasa, Hanuman first tries making himself so big that she could not swallow him. But as she opened her mouth wider and wider, gnashing at him with her razor-sharp teeth, the monkey-god escapes by shrinking himself to the size of a dust mote and flying out from between Surasa’s teeth. Photo: Connected to India 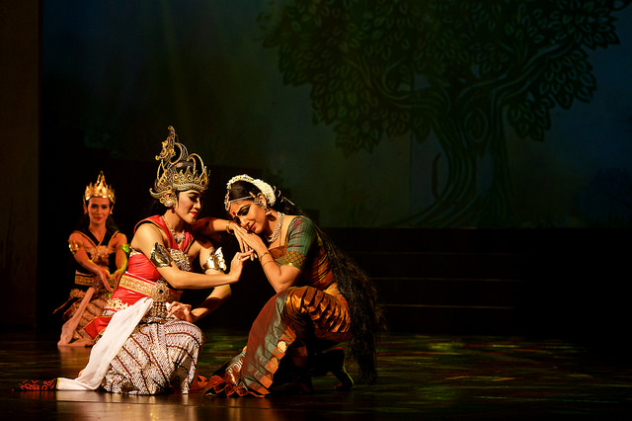 Trijata, daughter of Vibhishana, trying to console Sita about the well being of Lord Ram as both went to the battlefield to see the fight between the forces of Ravana and Lord Ram. Photo: IndieStrings 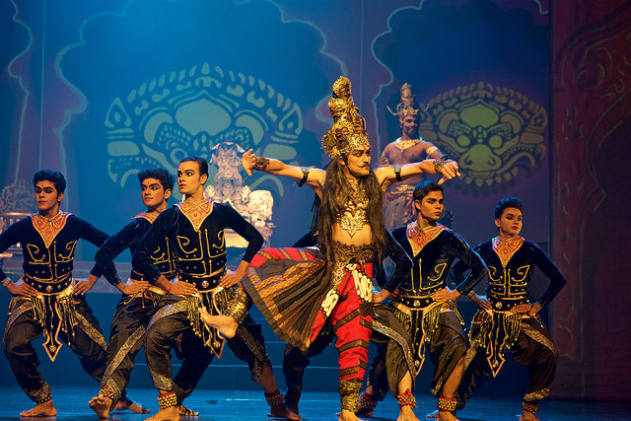 The demon king Ravana dances ferociously along with his soldiers as he prepares for a full fledged war with Lord Ram. Local artist from Singapore Osman Abdul Hamid performs the role of Ravana. Photo: Connected to India 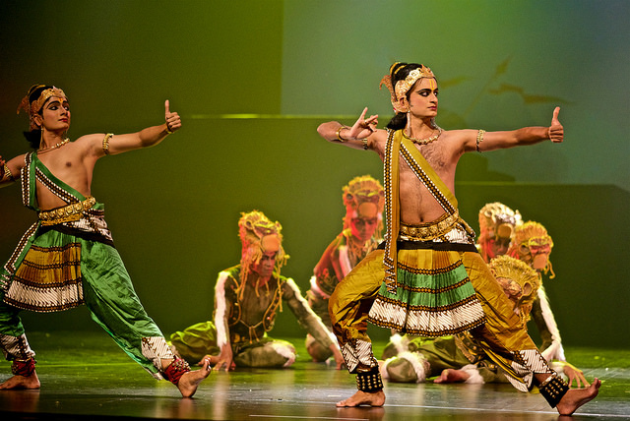 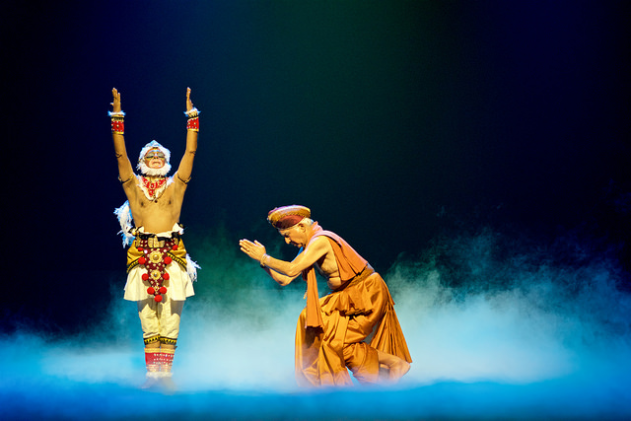 As Hanuman meets with sage Valmiki, he narrates that he has written Anjaneyam Ramayan for himself while the whole world will be acquainted with the noble character of Lord Ram and his wife Sita through the epic Ramayana composed by Valmiki. Photo courtesy: Connected to India
Kalaa Utsavam Apsaras Arts Kalaa Utsavam 2017