More than 40 fire rescue units responded to the scene after the two vintage planes – a Boeing B-17 Flying Fortress and a Bell P-63 Kingcobra – went down during the Wings Over Dallas airshow. 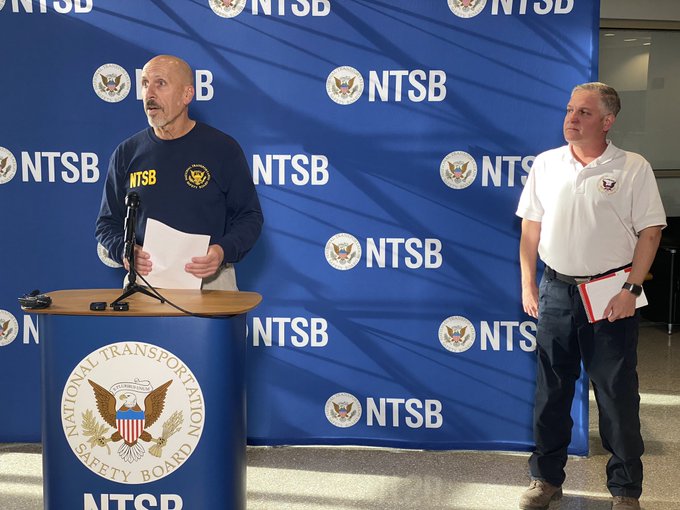 The team dispatched by the NTSB consists of technical experts who are regularly sent to plane crash sites to investigate the collision. Photo courtesy: Twitter/NTSB

In video footage of the crash that was described by Dallas’ mayor as “heartbreaking,” the planes are seen breaking apart in midair after the collision, then hitting the ground within seconds, before bursting into flames.

Several videos posted on Twitter showed the fighter plane appearing to fly into the bomber, causing them to quickly crash to the ground and setting off a large ball of fire and smoke.

NOW - B-17 bomber and a smaller plane collide at Dallas airshow.pic.twitter.com/BmJgnxBnrb

“I just stood there. I was in complete shock and disbelief,” said Montoya, 27, who attended the airshow with a friend. “Everybody around was gasping. Everybody was bursting into tears. Everybody was in shock.”

Emergency crews raced to the crash scene at the Dallas Executive airport, about 10 miles from the city’s downtown.

The collision occurred during the Commemorative Air Force Wings Over Dallas show.

The B-17, an immense four-engine bomber, was a cornerstone of US air power during the second world war. The Kingcobra, a US fighter plane, was used mostly by Soviet forces during the war. Most B-17s were scrapped at the end of the second world war and only a handful remain today, largely featured at museums and airshows, according to Boeing.

The National Transportation Safety Board (NTSB) took over the investigation once its team reached the scene, the agency said at a news conference yesterday. The team dispatched by the NTSB consists of technical experts who are regularly sent to plane crash sites to investigate the collision, according to the NTSB.